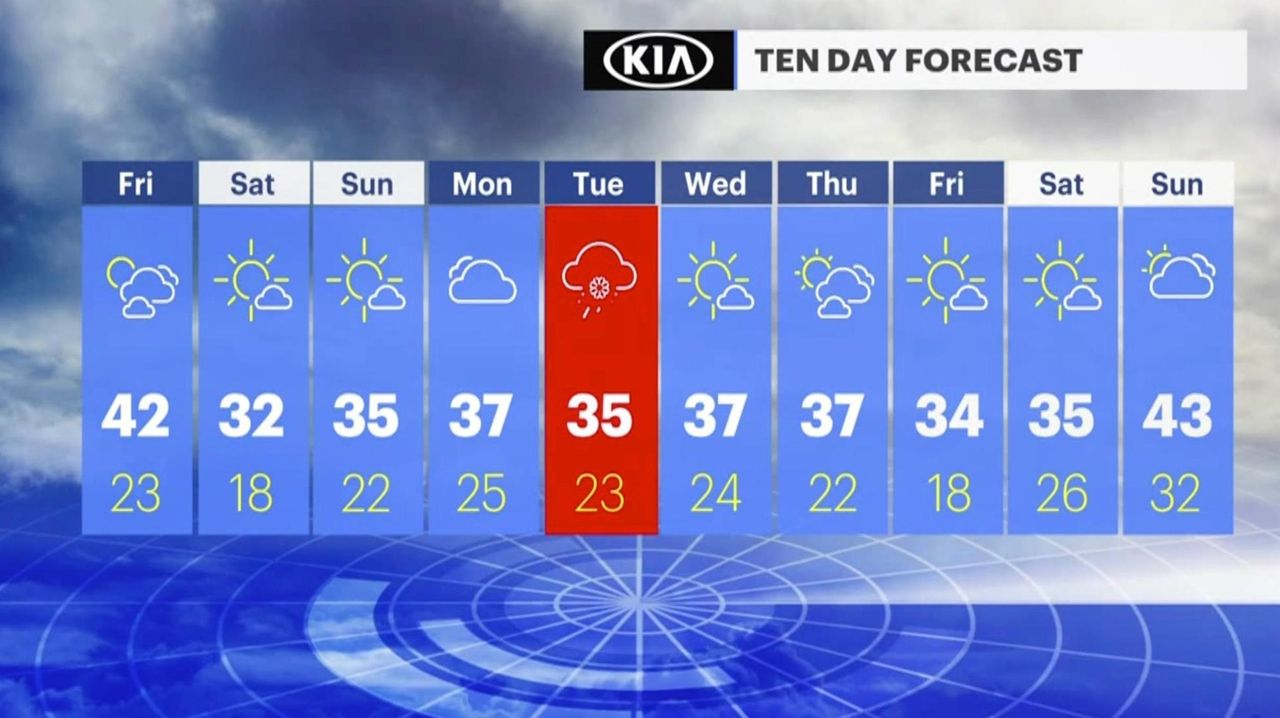 The National Weather Service said Friday's temperatures should reach the low 40s, but highs are expected to be around the freezing mark this weekend and snow is possible early next week. News 12 Long Island meteorologist Rich Hoffman has the forecast. Credit: News 12 Long Island

Anyone pining for single-digit cold — at least with the wind chill — take heart: Saturday night is nigh.

After a sunny Friday, when temperatures will just top 40 degrees and west wind gusts will hit 26 mph on Long Island, it will be a cold night and a cold weekend, though sunshine should rule the skies both days, forecasters said.

Saturday and Sunday will have matching daytime highs around freezing, according to the National Weather Service’s Islip office. Wind chill Saturday will make it feel like to 10 to 20 degrees, though, thanks to wind gusts that could clock in at 36 mph.

And Saturday night is when the cold will strike, as the wind chill is predicted to make it feel like five to 15 degrees, the weather service said.

No wind chill was estimated for Sunday, when the sunshine will help offset a northwest wind of about 16 mph.

Monday night and Tuesday now have a 50% chance of snow. The forecasters said temperatures will bounce from the mid-20s at night to the mid-30s during the day through Thursday.

On this Friday, the white stuff cannot be entirely ruled out in the metropolitan area — though likely not on Long Island.

An upper-level area of low pressure, the weather service said, will help steer a cold front this way. Low pressure masses can create rain or snow as rising air condenses.

This is how the weather service assessed the chances of snow on Friday.

"There is, however, a chance of a few light snow showers or flurries north and west of New York City. Otherwise, expect a mix of clouds and sun," the weather service said. "Winds will be from the west-northwest with gusts to 25 to 30 mph. High temperatures will be a few degrees above normal, generally in the low 40s."

Friday night’s thermometers will sink to 24 degreees, with wind chill values hitting 15 to 20.

"A cold airmass will be in place for Saturday with a gusty northwest flow as temperatures are expected to be a few degrees below seasonal normals, with wind chills in the teens and lower 20s," the weather service said.

And after an invitingly sunny Sunday, that night the clouds roll in.

Monday should be cloudy too, with a high around 37 degrees. The nighttime low of 27 degrees will be plenty cold enough for snow.

And then two clashing systems bring uncertainty when it comes to predicting whether Long Islanders will be clearing away any snow Monday night and Tuesday.

"The trends remain to keep the low to the south of the area as arctic high pressure to the north noses down along the northeast coast," the weather service said. It added: "The airmass remains cold and precipitation is expected to be in the form of light snow."

1:49 Forecast: Rain through Monday, then a warm up
5:01 Counties add fair housing staff, but no testing program
Insiders: Cuomo's style led to nursing home controversy
1:42 Transition to high school more troublesome because of COVID-19
1:34 Fighting COVID-19: How medical experts have faced the virus
1:13 Advocates step up COVID-19 vaccination efforts in Latino communities
Didn’t find what you were looking for?