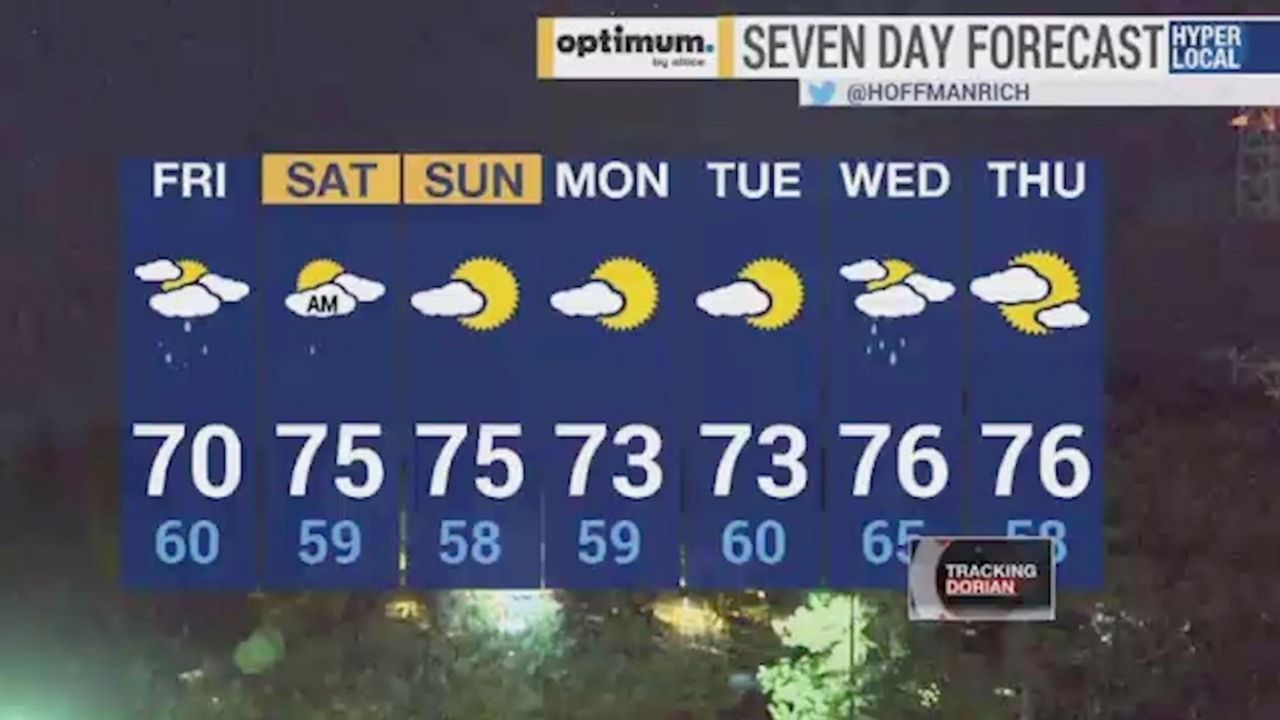 Long Island should escape almost all of Hurricane Dorian's wrath as it is expected to clear Montauk Point by 200 miles, though rip currents and high waves will gnaw away at beaches from New York City to the East End, and coastal floods could rise to 1 to 2 feet from Friday to Saturday, forecasters said.

"We really are on the fringe of the system," David Wally, an Islip-based National Weather Service meteorologist, said by telephone. "Any impact should be pretty minimal."

But Dorian could bring gusts as high as 40 mph and moderate to briefly heavy rain, possibly around an inch, especially on the East End, national forecasters said.

Their warnings reveal the hurricane's might though it has slipped to a Category 1 storm from the most catastrophic Category 5, which it was ranked when it pounded the Bahamas last weekend.

Dorian's 90-mph hurricane-force winds extended up to 80 miles from its center at 11 p.m. Friday, hurricane forecasters said. Tropical storm winds — below 74 mph — extended as far out as 230 miles.

For the first time, Dorian made U.S. landfall at North Carolina's Cape Hatteras midmorning Friday. Though a quarter of a million residents were ordered to leave the 200-mile-long string of barrier islands, Gov. Roy Cooper said, "There is significant concern about hundreds of people trapped on Ocracoke Island."

The hurricane deprived more than 370,000 people of electricity in the Carolinas and Virginia, officials said.

In the Bahamas, where Dorian's monsoon-like rain and 185 mph winds destroyed tens of thousands of homes, residents and rescuers are crawling through wreckage and searching for survivors. The death toll could climb into the thousands, officials say.

The Miami-based National Hurricane Center said at 11 p.m. Saturday that the center of Dorian was swirling about 200 miles south of Nantucket, Massachusetts, and moving toward the northeast near 25 mph.

"On the forecast track the center of Dorian should pass to the southeast of extreme southeastern New England Saturday morning, and then across Nova Scotia late Saturday," hurricane center forecasters said.

The storm was expected to move over Nova Scotia with hurricane force winds and then become a powerful post-tropical cyclone over eastern Canada.

Once Dorian departs Long Island waters, the weekend and the start of the workweek all should be sunny with highs in the low to mid-70s, the weather service said.