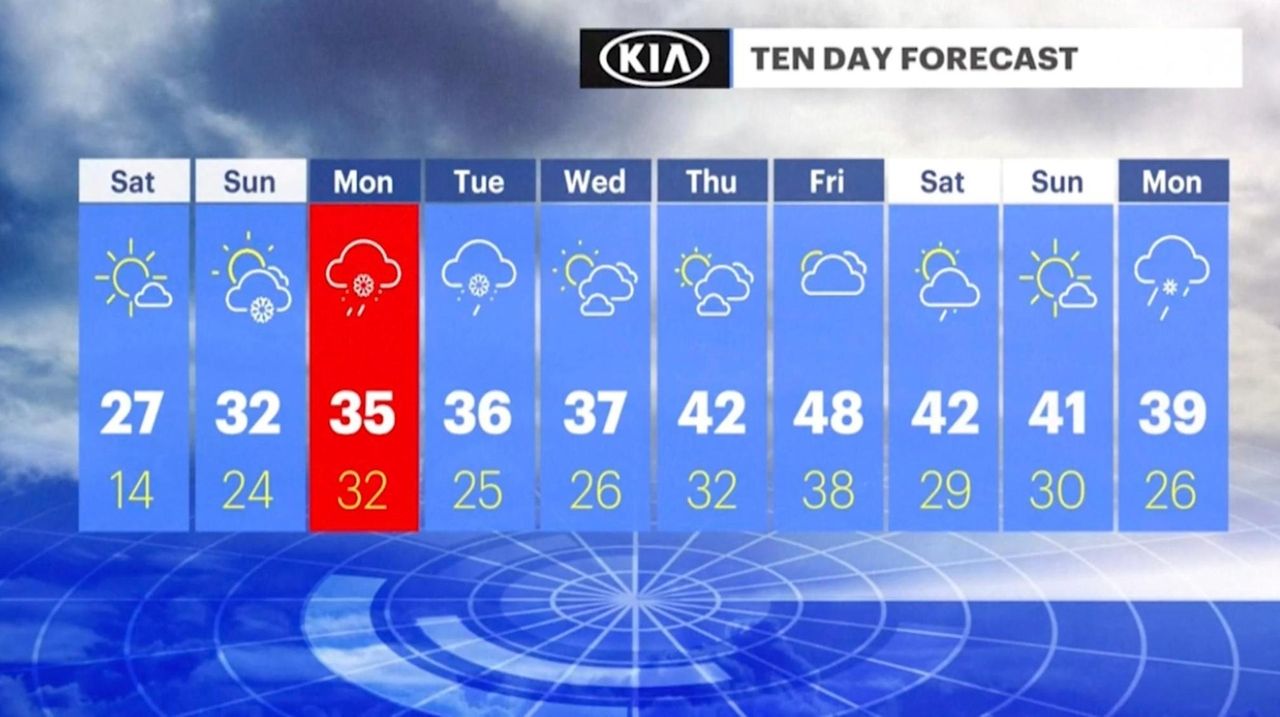 After Long Island saw highs temperatures in the 20s on Friday with a wind chill making it feel close to or even below zero degrees, forecasters said the cold would continue into the weekend ahead of a possible storm on Sunday. News 12 Long Island meteorologist Rich Hoffman has the forecast. Credit: News 12 Long Island

Mother Nature is expected to drop between 6 inches and one foot of snow on Long Island beginning Monday, meteorologists said Friday.

The weekend is expected to remain relatively precipitation-free with high temperatures reaching the mid-to-upper 20s on Saturday, and about 32 degrees Sunday, said Matthew Wunsch, a meteorologist with the National Weather Service.

Moderate winds of about 25 mph are expected Saturday, he said.

That's the good news, Wunsch said Friday night. Although snow may begin to accumulate late Sunday night into Monday morning, the heavier snowfall is predicted to begin Monday afternoon. By late Monday, Long Island may be covered in the white stuff, Wunsch said.

"By that point, there could be six, seven, eight inches on the ground," he said.

High temperatures Monday and Tuesday are expected to be in the mid-30 degrees, Wunsch said.

Snow is expected to continue through Tuesday afternoon, Wunsch said.

"We could see a foot of snow for most of the Island — it could even be slightly higher."

Wind gusts could be up to 35 mph Tuesday, he said.

The multiday storm is courtesy of a splinter of the polar vortex, which swept south, clashing with a mid-Atlantic low-pressure system, forecasters said.

"We know our customers need their power now more than ever.," said John O’Connell, vice president of transmission and distribution at PSEG Long Island. "Our crews stand at the ready to begin restoring service, in the event of any outages, safely and as quickly as conditions allow."

He stressed patience and vigilance.

"The forecasted wind and snow can increase the possibility of downed wires and power outages," O'Connell said.

PSEG urged Long Islanders to consider any downed wires "live" and to stay at least 30 feet away from them and call 911 to report the hazard.

The company also stressed outages or downed lines can be reported to PSEG's 24-hour number: 800-490-0075 or by logging on to www.psegliny.com/outages — the company's website.

When the storm hits, Wunsch said Long Islanders should bundle up and hunker down.

He cautioned, however, storm projections are constantly being reevaluated.

With Robert Brodsky and Joan Gralla