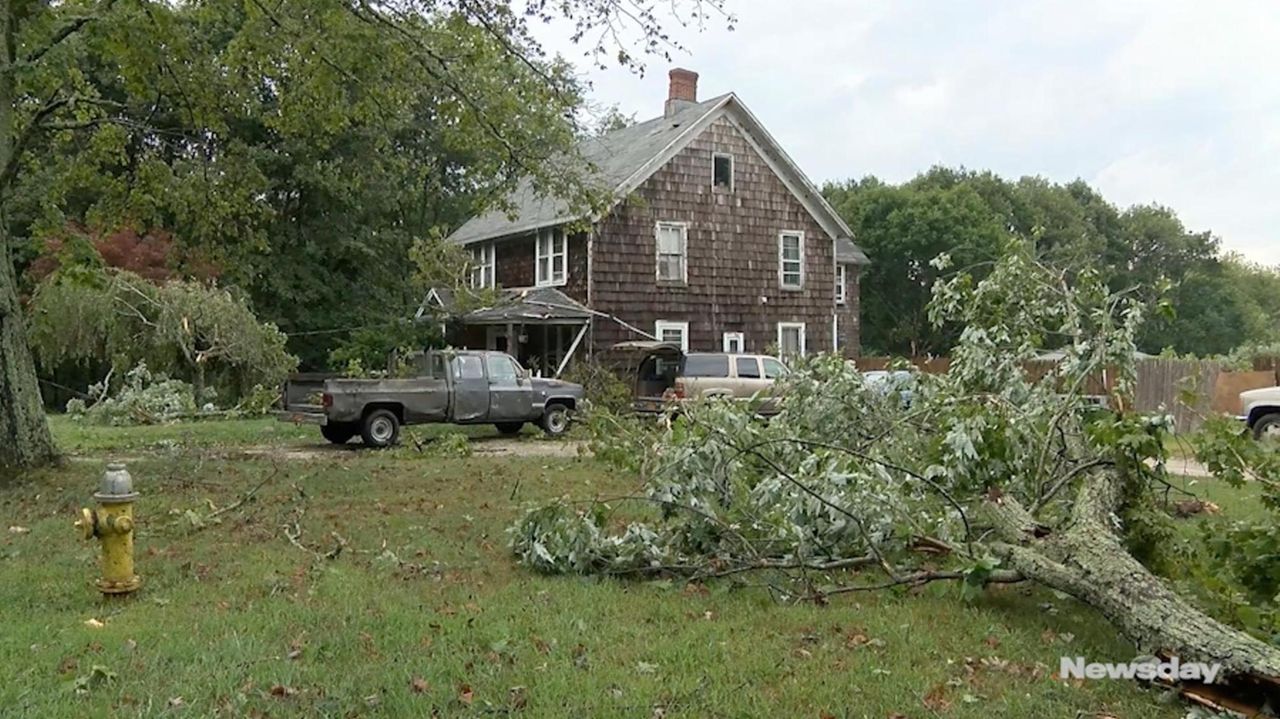 Residents in Manorville explained what they saw when they walked out of their homes Monday night after a possible waterspout or funnel cloud passed through Suffolk County.  Credit: Stringer News

The National Weather Service said it was investigating reports of a waterspout and funnel cloud Monday evening off Long Island's South Shore.

National Weather Service meteorologist John Murray said they had received reports and photos and seen pictures and videos on social media of the weather phenomena that matched what meteorologists had observed on radar.

“We had some thunderstorms that moved across Suffolk County and we saw rotation with them on radar and we did issue a tornado warning,” he said. “At this point we're just sorting out getting exact timing and location information so we’re still in the process of gathering information with regards to damage and sites of the storm.”

Murray said preliminary locations of the waterspout was south of Fire Island Pines beach at 3:49 p.m. He said the person who shot the photo of the funnel cloud was at Smith Point County Park in Shirley looking north.

A severe thunderstorm warning for central Suffolk County ended at 5:15 p.m. Monday, the weather service said. A tornado warning for Manorville and Calverton was canceled just before 5 p.m.

Fire and police officials said Suffolk residents reported trees and electrical wires down in Manorville. But there were no reports of people trapped or injured, authorities said.

Dan Losquadro, Brookhaven Town highway superintendent, said the damage in Manorville was “not anywhere near as bad as I was anticipating.”

The damage was localized to around South Street and Dayton Avenue, where about a dozen trees fell into the roadway, he said. His department and PSEG are on scene to help reopen the roads. A crew specializing in tree removal will remove “hanging limbs.”

“The winds are obviously very high, and it’s sheared the tops off a number of these trees,” Losquadro said.

Losquadro said damage is “more extensive” and “significant” on private properties than in the roadways. He said there had been no reports of injury, and only one report of a tree damaging a building, which was a garage. “It looks like everyone was very fortunate,” he said.

He said he expected his crews to work through the night to clean up the roads.

PSEG spokeswoman Elizabeth Flager said wires and two Verizon poles were downed and that crews would work through the night to restore power to the 30 or so customers in the dark.

Tree-cutting crews would first have to clear the way before Verizon can install new poles, she said. "It's a big job."

It was too soon to say how Hurricane Dorian — still hovering over the Bahamas — might affect Long Island, the weather service said.

Rain was expected to continue until late afternoon. Monday’s high will be 76 degrees, cooler than the typical 78 because of cloud cover. The low is to be 66.

While the region may not feel Dorian’s effects until Friday, Morrin said, anyone at the beach Monday should be wary of rip currents. A high rip current risk remains in effect until Monday night, according to the weather service.

“The surf is dangerous for all levels of swimmers,” Morrin said.

Morrin’s advice for beachgoers: pay attention to lifeguards and beach patrols. “If they close it, if they say it’s dangerous, it is," he said.

Tuesday is expected to be sunny, with a high near 79 degrees, according to the weather service.

The rest of the week, however, will likely be rainy.

The weather service predicts Wednesday will be partly sunny, with a high near 83 degrees, but there is a chance of showers after 3 p.m. Wednesday.

There is a 40 percent chance of showers after 10 a.m. Thursday, which is expected to be partly sunny with a high of 74 degrees, the weather service said.

Rain is also possible Friday. The day will be mostly cloudy, with a high of 70 degrees, the weather service said.

With Ellen Yan and Rachelle Blidner