"I think at this point we're very tired of the snow," one Long Islander said, a day before another storm on Sunday. Newsday's Steve Langford reports. Credit: James Carbone

This story was reported by John Asbury, Catherine Carrera, Matthew Chayes, Jean-Paul Salamanca and Craig Schneider. It was written by Schneider.

Long Island is bracing for its second major storm within a week, as forecasters expect the region to get 4 to 9 inches of snow starting Sunday morning.

A winter storm warning will be in effect from 6 a.m. to 9 p.m. Sunday, according to the National Weather Service. The heavier amounts of snowfall are expected in parts of eastern Suffolk County, with snow expected to fall at up to 2 inches per hour in the late morning to early afternoon, forecasters said.

Gov. Andrew M. Cuomo directed state agencies to prepare for emergency responses to lake-effect snow in Western New York and the North Country on Saturday, and the coastal snowstorm in New York City and Long Island on Sunday.

On Long Island, snow could begin after 3 a.m. Sunday and continue up until 7 p.m. Winds are expected to be a much calmer 9 to 14 mph when compared with the nor'easter that dumped more than 18 inches of snow in some places of the Island last Sunday through Tuesday. 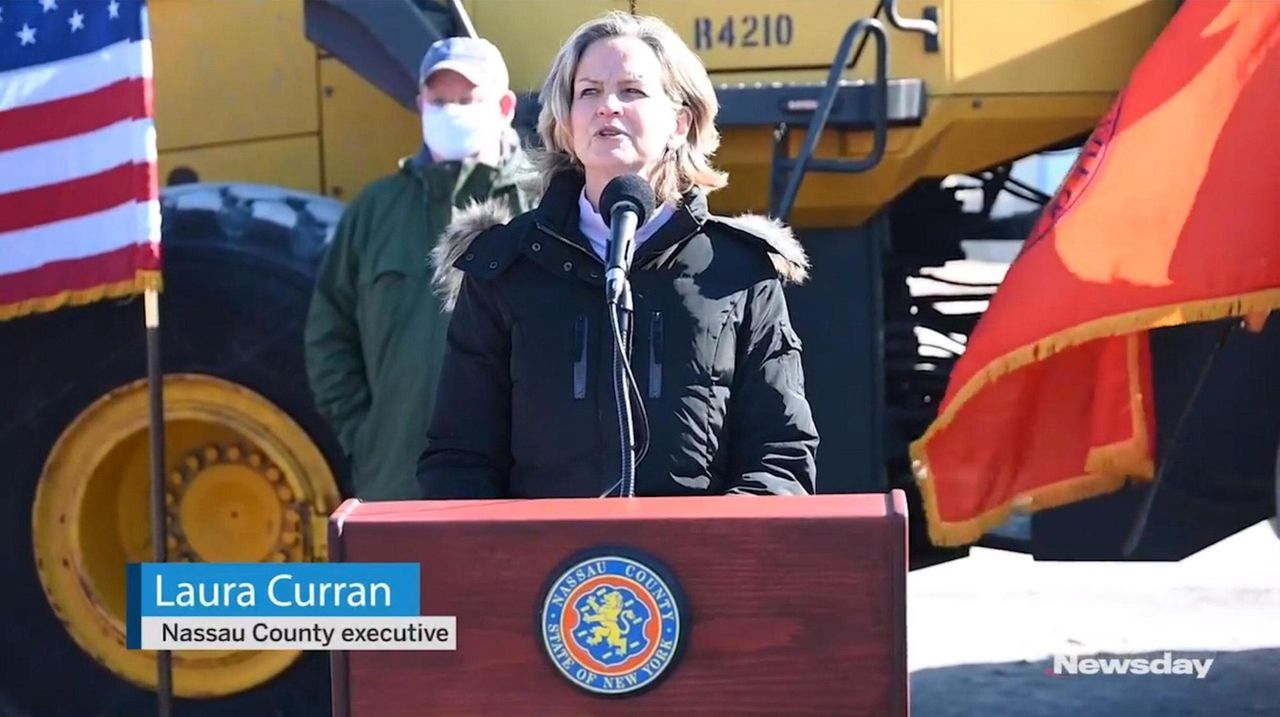 Nassau preps for 'Super Bowl Storm' Nassau County Executive Laura Curran says Sunday's storm will not be as powerful as the last one. Credit: James Carbone

"It's going to be a quick-moving storm, not a slow-goer like the last one," said meteorologist Bill Korbel. "And it's not going to be as intense. We won't have the strong winds that we had."

PSEG officials said they have added extra crews in preparation. Officials said that with winds expected to be slower than the last storm, the chance of outages or blowing snow on power lines is reduced.

"It should be less of a concern, but we have additional personnel ready to restore any power outages that occur," PSEG spokeswoman Elizabeth Flagler said.

The Long Island Rail Road expects to continue regular service for the duration of the storm, the Metropolitan Transportation Authority said Saturday evening. But that could change, depending on how bad the storm gets.

"There is still a great amount of snow on the ground across Long Island from last week’s storm, and the addition of more snow, coupled with high winds, may lead to drifting snow," the MTA said in a news release.

Nassau Executive Laura Curran said the county is directing local snow teams and coordinating with town officials, police, fire, the LIRR and PSEG. She said the county has 13,000 tons of road salt.

"This storm is not going to be as long and relentless" as the prior storm, Curran said.

The county used 7,000 tons of salt during the last storm to clear 1,500 miles of roads. The Nassau Highway Department had to replace several blades and make other repairs to some of the 150 snow plows and trucks as a result of the storm.

Public Works Commissioner Ken Arnold said his team will be almost fully staffed, with less than a dozen workers out due to COVID-19 and other absences.

The county also is opening warming centers at Cantiague Park, Wantagh Park and Mitchel Field. Nassau has a warm bed hotline for emergency overnight shelter at 516-573-8626.

Curran suggested that people remain hunkered down at home to watch the Super Bowl matchup between Tampa Bay and Kansas City on Sunday evening. "Stay home, stay off the roads and take care of yourself," she said.

Curran said she was concerned that roofs and utility lines might be in danger due to the weight of the new snowfall on top of the snow remaining from the last storm.

Suffolk Executive Steve Bellone said the county has 250 vehicles, most of them snow plows, and 16,000 tons of road salt ready. If the weather forecast holds, he said the county will probably pretreat roads early Sunday.

"If the forecast stays as it is, we're going to put out everything we have," he said.

Bellone said he did not expect major outages of power, but that the county remains in touch with PSEG. He, too, urged people to avoid traveling to Super Bowl parties.

"If COVID-19 is not enough of a good reason to stay home, maybe this snowstorm is," Bellone said.

"We have 1,200 miles of roadway, and we’re just getting over a major snowstorm," Clavin said at a news conference Saturday morning. "This one … it’s going to be a real tricky one with accumulation and freezing temperatures overnight."

The storm is moving out of the southwest into the Gulf states on Saturday and will move up the coast overnight before reaching New Jersey and New York, National Weather Service meteorologist Matthew Tauber said.

"It will be all snow first thing Sunday morning, and we’ll see the bulk of it midmorning Sunday through the afternoon," Tauber said. "It will be fairly quick-moving, with the bulk of snow falling in six to 12 hours."

In Riverhead, Supervisor Yvette Aguiar said the Town was imposing an advisory beginning at 6 p.m. Saturday, asking that no cars be left on the street to facilitate plowing.

"We have an excellent team, and they’re prepared, and we’re ready," she said.

Islip spokeswoman Caroline Smith, in a text, urged residents "to remove their cars from the roadways and into their driveways, or onto their lawns if necessary, so that crews can plow curb to curb."

Over the next week, the polar vortex from Canada and through the Midwest is expected to bring frigid temperatures to the Island, with highs in the 20s. Temperatures could reach into the upper 30s Tuesday, however, with another chance of rain and snow.

Centereach called the heart of LI, packed with shopping centers
Theodore Roosevelt statue at New York museum to be relocated
Hundreds of absentee ballots still uncounted in LI primaries
Adams takes fragile lead in NYC Democratic mayoral primary
Yang concedes, vows to work with next NYC mayor
Bill would expand grounds to object to land use applications
Didn’t find what you were looking for?