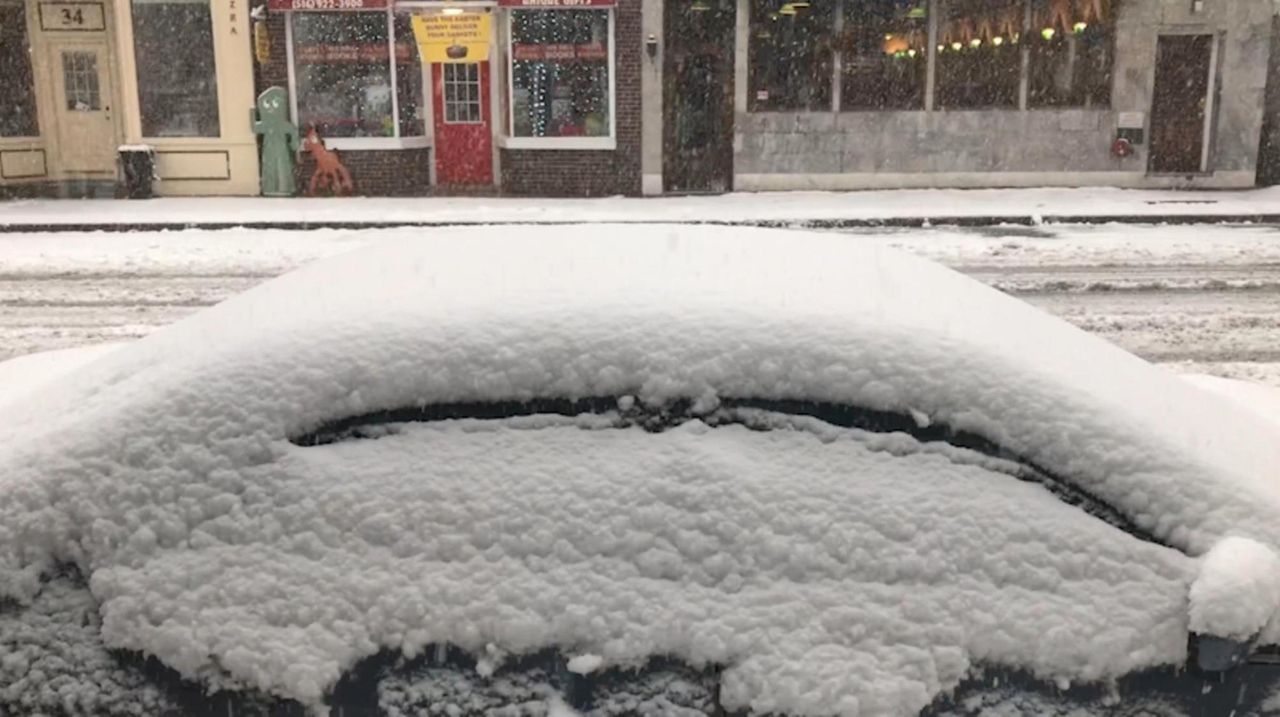 A look at the snow around Long Island on Monday morning. Shortly before 7 a.m., a snowfall rate of 2 inches per hour was reported at LaGuardia Airport, according to the National Weather Service. Credit: Newsday / Jeffrey Basinger; Barry Sloan

The second day of April slapped Long Island with about 3 to 6 inches of Spring snow — much of it shortlived after the afternoon sun took over and temperatures rose.

The clearing afternoon skies “should do a pretty good job of melting the snow,” and leave roadways dry for the evening commute, said Faye Morrone, National Weather Service meteorologist in Upton.

In all, 6.6 inches of snow had been reported in Sayville, and West Babylon had 5.9 inches. Five inches was reported in Plainview and 4.6 inches at Long Island MacArthur Airport in Ronkonkoma. There was also one report of 7 inches in Centre Island.

Steve Duffis was surprised to see so much snow had fallen when he got off the train at the Ronkonkoma LIRR station at about 11 a.m., having come from Old Bridge, New Jersey, to see his father in Bellport.

“It’s snowing in April and we have to get out our jackets and caps again,” said Duffis, 32, an IT administrator for Executive Data Systems in New York City. “I don’t mind the snow but there’s a time for it, and I think that time has passed.”

Only two days in, and already April has recorded above average monthly snowfall, with 0.6 normal for the entire month at the airport, according to the Northeast Regional Climate Center. This, as Instagram was flooded Monday with snow images, remarking not so much on amounts, but the time of year.

Still, don’t think April hasn’t seen its share of snow, to which Long Islanders who were around in 1982 can attest. That year 16 inches fell at the airport, all on April 6, according to Samantha Borisoff, climatologist with the regional center.

The weather service said the afternoon will be partly sunny and “temperatures will rise into the low to mid-40s this afternoon, promoting plenty of melting.”

While the timing was unfortunate for morning commuters at least they caught a bit of a break with public schools off this week.

Yankee fans were not as lucky: The team postponed their opening game, which had been scheduled for Monday afternoon.

Looking ahead, rain is forecast to start Tuesday around 8 a.m. or so, Morrone said, continuing through the daylight hours. That’s as temperatures head up to the mid-40s, falling far short of the daily normal of 53.

Temperatures hold pretty steady overnight Tuesday into early morning Wednesday, which sees showery conditions in the morning, becoming more widespread in the afternoon, with periods of moderate rain, even an isolated thunderstorm, she said.

Highs Wednesday were forecast to reach the upper 50s.

And forecasters are also monitoring conditions that could come together for another storm system, with the weather service saying only at this point that “an inclement weekend is possible.”

The Yankees' home opener was postponed by snow on Monday, April 2, 2018. Here's a look at the snowfall at the stadium Monday morning.