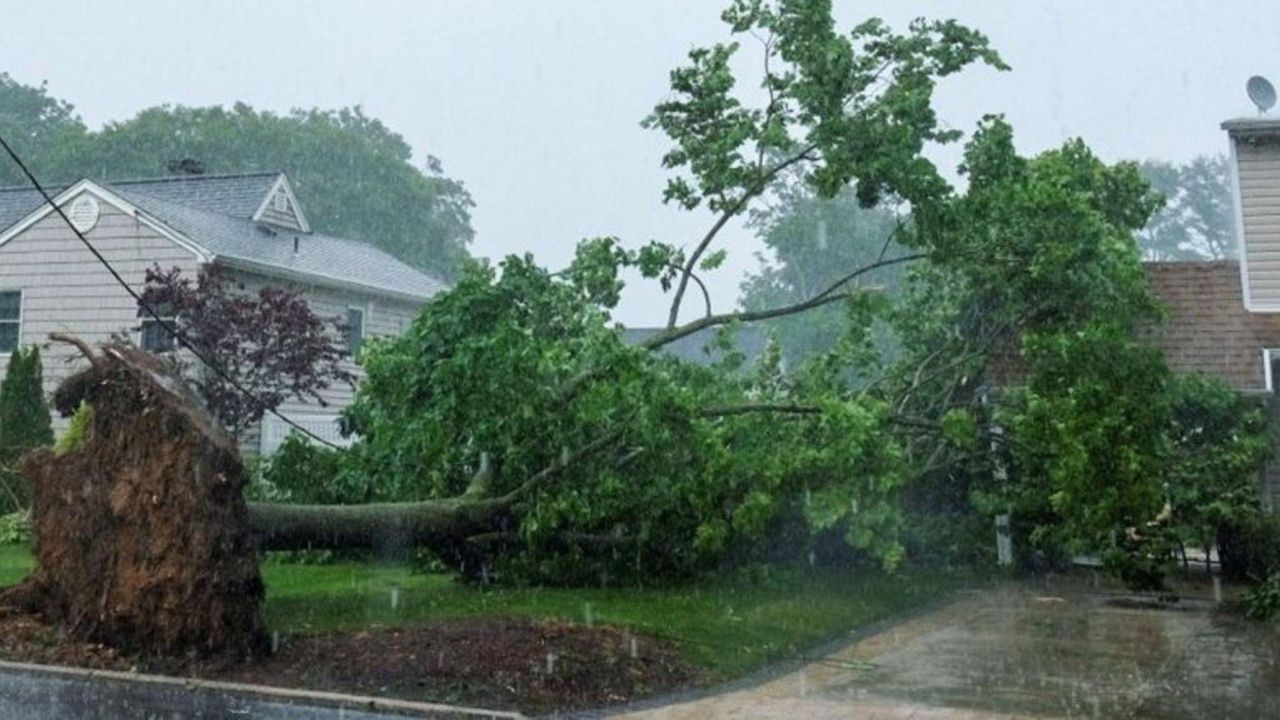 A fast-moving thunderstorm cut a dangerous path across Long Island's midsection Sunday afternoon, causing the death of a woman who drowned off Fire Island, toppling trees onto homes and roadways, and knocking out power for tens of thousands in Suffolk County, authorities said.

The sudden burst of powerful winds and rain followed a menacing buildup of dark clouds over the heart of Long Island just after 2 p.m. Within minutes, the bright sunny skies that had blanketed the area for most of the day were gone. In their place, loud thunderclaps, heavy rain, strong winds and in some places, according to the National Weather Service, hail the size of a quarter.

Trees felled by winds of up to 60 mph landed on Long Island Rail Road tracks and forced service suspension on three branches.

The body of an unidentified woman, drowned in rough Fire Island waters churned up by the storm, was reported near Seaview Marina about 3:40 p.m., Suffolk police said.

When officers with the Marine Bureau arrived on the scene, they found the 911 caller on a paddleboard attempting to keep the victim afloat, police said. Marine Bureau officers transported the woman to their headquarters at Timber Point, where a physician assistant from the Suffolk medical examiner's office pronounced her dead, police said.

Peter Sikinger, of Oakdale, who had his boat anchored at Atlantique Marina, near Fire Island, said conditions were calm with no breeze before the storm arrived.

Then the winds picked up rapidly, Sikinger said, the rain poured down, and umbrellas flew into the water and down the boat dock.

“You can see 50 feet in front of you because it was so dark and gray,” he said. “Once the hail started, you can barely open your eyes.”

Others at Atlantique Beach described boats anchored off the beach bouncing off each other like pinballs.

The sheer power and speed of the storm had some Long Islanders in its path believing they'd seen a tornado, but officials with the Upton office of the National Weather Service ruled that out. Instead, meteorologists said, the strong gusts were "straight-line winds," or "downbursts," strong enough to do tornado-like damage, but without the same rotational movement.

Wind speeds hit 45 mph during the storm, with pockets as fast as 60 mph, said David Stark, a meteorologist with the weather service.

More than six hours after the storm moved through, upward of 34,400 PSEG Long Island customers remained in the dark from power outages, with the hardest-hit areas the towns of Babylon, Huntington, Islip and Smithtown, the utility's website reported. At its peak, the storm knocked out power for 60,000 customers, said PSEG Long Island spokeswoman Elizabeth Flagler, with service restored for 25,000 just before 9 p.m.

Additional line and tree crews were called in to help with the damage, PSEG Long Island said. Electrical crews were expected to work through the night and into Monday, if needed, utility officials said.

Downed trees suspended service on the Montauk, Ronkonkoma and Port Jefferson branches of the Long Island Rail Road, LIRR officials said. By 8:30 p.m., the last of the trees had been removed from the tracks on the Montauk line between Babylon and Patchogue and service was starting up again, according to the LIRR's website.

Power lines knocked down by falling trees were reported in numerous Suffolk towns on the North Shore. Streetlights were out in East Northport and Dix Hills.

The damage of downed trees and power lines also left some stranded when their passage home was blocked.

After 7 p.m., Nancy Bartow, of Northport, said she and her husband, Doug, had been waiting in their car in a parking lot at Hobart's Beach for more than three hours because their only way out — Eatons Neck Road — was blocked by downed trees and power lines.

Eatons Neck Fire Department Chief Steven Zulawski said that about 9:20 p.m., PSEG Long Island crews had disconnected the downed power lines so the trees could be removed, and one lane was opened to traffic.

Live radar, latest forecastSee how the weather's looking for your area for the days ahead.

State Senate confirms Janno Lieber as MTA chairman
Hochul: State weighing options for school leaders that don't enforce mask mandate
School Notebook: Winners in Emerging Leaders contest
Where to look for a COVID-19 test on LI
How much state aid will your school district get?
Forecast: With snow fallen, here comes the cold
Didn’t find what you were looking for?