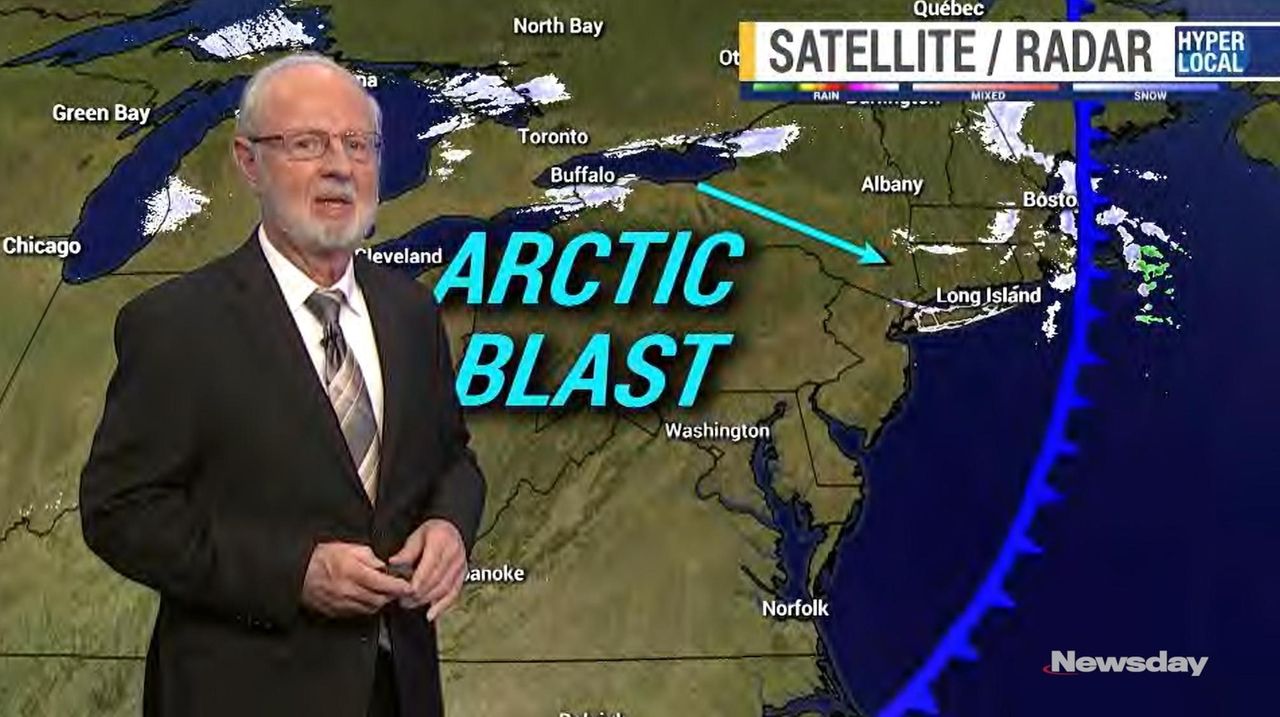 News 12 Long Island meteorologist Bill Korbel on Wednesday talked about the inch of snow that fell over a period of about 20 minutes, with temperatures falling to the single digits overnight.  Credit: News 12 Long Island

Wind chill temperatures were expected to sink to 10 to 15 degrees below zero Thursday, a day after a snow squall disrupted the evening commute and brought brief but tense moments of whiteout conditions.

Traffic on the Long Island Expressway crawled Wednesday as the squall dumped less than an inch of snow, which was whipped by wind gusts as high as 45 mph just before 5 p.m., creating whiteout conditions, meteorologists said.

The squall moved at about 40 to 45 mph and it was over in less than half an hour, but the snow was expected to create icy and black ice conditions overnight, said meteorologist Brian Ciemnecki at the National Weather Service's Upton office.

"It kind of came and went," Ciemnecki said. "The squall came through with an Arctic front and behind the front are the cold temperatures."

Nassau and Suffolk police said they had no reports of serious crashes and problems due to the weather.

But still, the cold and winds disrupted power supply to about 4,400 Long Islanders Wednesday and prompted PSEG Long Island and Long Island Rail Road crews to remain on alert.

The LIRR said waiting rooms will remain open round-the-clock through Friday. The LIRR warned riders to be cautious at stations and monitor train schedule changes.

Agency spokesman Chris McKniff said it is taking weather-related precautions through Friday, or whenever the bitter cold ends: ”We have prepositioned crews to be able to repair any weather-related issues, such as broken rails."

Airlines had warned travelers to check their flights if flying out of LaGuardia or Kennedy airports on Wednesday, especially for flights to the Midwest, where the deep freeze has been deadly. The Federal Aviation Administration Wednesday night reported average weather-related delays of 88 minutes at Kennedy and more than two hours at LaGuardia.

Temperatures were expected to fall overnight, and with a wind chill advisory in effect from midnight until 10 a.m. Thursday, Long Islanders might wish they could stay in bed.

While the normal daily highs and lows for January at MacArthur Airport are 38 to 39 degrees and 23 to 24 degrees, the month is certainly no stranger to biting cold days.

In fact, Monday last week, Martin Luther King Jr. Day, averaged out at 20 degrees below normal, with a 6-degree morning low and 14-degree high later in the day.

Temperatures recover by Saturday, Cavlin said, heading up to the low 30s, as Sunday and Monday are looking at the low to mid-40s.

The Winter Homeless Hotline (866-927-6233) is active. The county's Department of Social Services will make referrals and provide shelter placement, according to a news release.

Any homeless person in need of shelter during inclement winter weather can call Suffolk County's Department of Social Services' Temporary Housing Assistance Unit at 631-854-9547 between 8 a.m. and 4:30 p.m. Monday through Friday. After 4:30 p.m., on weekends and holidays, call the SCDSS Emergency Services Unit at 631-854-9100.

Warming centers are operated by the county's individual towns.