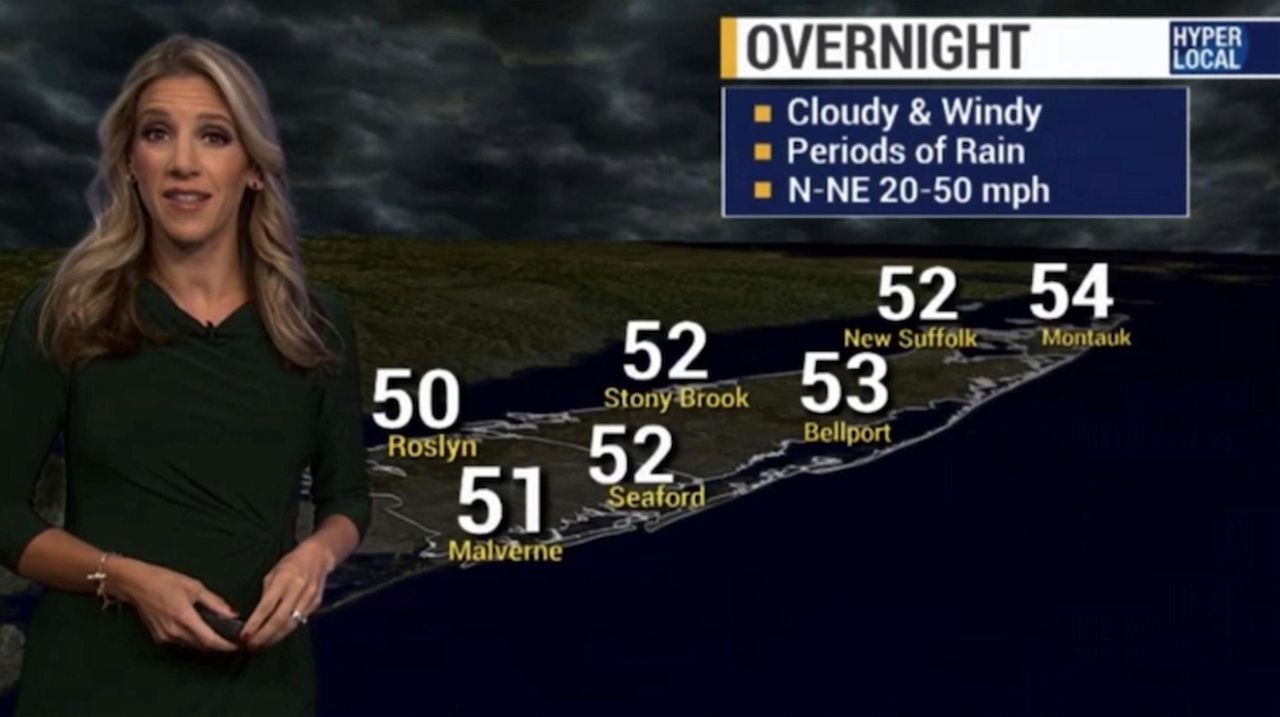 A coastal flood warning is in effect for parts of Long Island as of Thursday afternoon, courtesy of a nor'easter expected to unleash most of its power on the East End, according to the National Weather Service in Islip. News 12 meteorologist Sam Augeri has the forecast. Credit: News 12 Long Island

Coastal flooding is now the primary threat from a nor'easter slowly moving its way toward Long Island although the storm is no longer expected to bring periods of heavy rain.

A coastal flood warning is in effect for southern Nassau and southwest Suffolk through early Friday, said Carlie Buccola, a Weather Service meteorologist.

Levels at the Peconic River in Riverhead could be higher than 3 feet during high tides Thursday night and Friday morning with vulnerable coastal locales along the southern bays facing the highest threat, the Weather Service said.

Expect "dangerous" conditions on the water, with surf 10 to 15 feet on the ocean and 4 to 7 feet on the Long Island Sound, said News 12 Long Island meteorologist Rich Hoffman. Large waves and strong winds will lead to beach erosion, he said.

Wind gusts in Suffolk, especially out east, could reach 50 mph — about 11 mph faster than the minimum for a storm to be defined as a gale — according to the Weather Service, which warned that trees and power lines could topple. Nassau and the rest of Suffolk can expect 20 to 35 mph winds.

“Winds this strong can make driving difficult, especially for high-profile vehicles, in open areas and on elevated roads and bridges,” the weather service said.

Periods of heavy rain never materialized on an otherwise sunny and warm day Thursday, with less than a tenth of an inch reported in Islip, Buccola said.

"Our state agencies and emergency management teams are prepared with personnel and equipment to assist communities as quickly and effectively as possible if they are needed," said Cuomo, adding that the state's utilities have an existing base of 4,500 workers available for restoration efforts.

“The Nassau County Department of Emergency Management is in a state of enhanced monitoring, focusing on tidal flooding on the South Shore," Geed said. "The Department of Public Works has also made sure that construction sites are secure for anticipated high winds.”

Winds stir up LI fishing action that had been lacking

Suffolk Police Chief Stuart Cameron said the department had readied its Emergency Service Section, which can winch away downed trees, and a fleet of high-axle, former military vehicles that can travel through floods to rescue anyone trapped.

The marine bureaus will also be ready with various-sized boats, and if needed, more officers and call center staffers will be added, Cameron said.

Friday likely will start with rain, though it could ease after 2 p.m., the Weather Service said. Friday's high temperature is expected to be about 60 degrees, Hoffman said.

Overcast skies and a high of 64 degrees are forecast for Saturday. Sunday should be at least partly sunny and five degrees warmer, forecasters said. Columbus Day on Monday should be sunny, with the thermometer reaching 68 degrees.

Winds stir up LI fishing action that had been lackingHow will this past week's stiff winds affect the fishing? That's the question on angler's ...