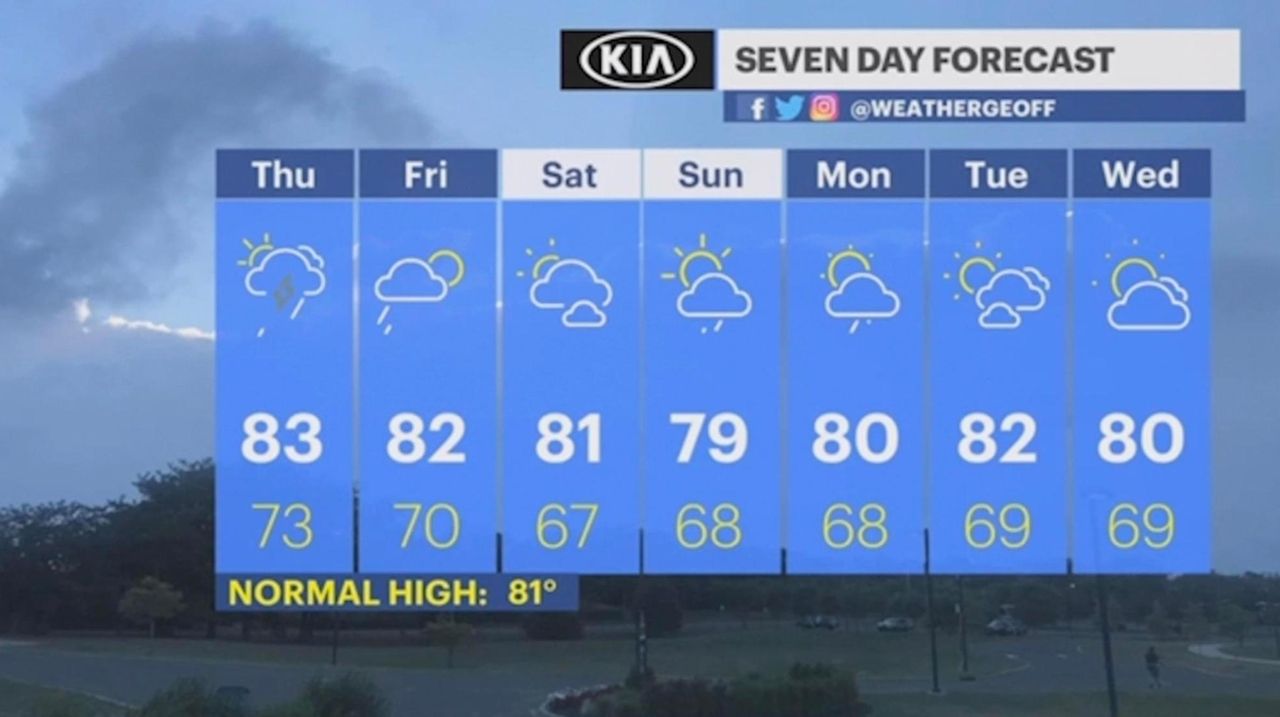 The National Weather Service said there is a 30% chance of rain on Thursday for Long Island and Friday will keep the humid spell going, though daytime highs should not surpass the low 80s. News 12 Long Island meteorologist Geoff Bansen has the forecast. Credit: News 12 Long Island

A flash flood watch for northern Nassau has expired but there is still a 40% to 50% chance of rain and thunderstorms Thursday afternoon on Long Island as the high heat of recent days breaks.

"A cold front will become nearly stationary just off to the south
of the Tri State Area today and Friday. Both days will feature
partly to mostly cloudy conditions with a chance of showers and
thunderstorms," said a National Weather Service briefing Thursday afternoon. "High temperatures will be near or slightly above normal, and it will continue to feel muggy."

Thunderstorms already delivered one inch of rain by late Thursday morning in  some areas. Day time highs are not expected to exceed the high 70s or low 80s, after three days of much higher heat and uncomfortable humidity in the region.

After cloudy conditions on Thursday and Friday, it should be sunny Saturday and highs should be around 80 degrees both Saturday and Sunday, forecasters said.

After possible downpours on Sunday, there is a 40% chance of the same on Monday, with a daytime high in the low 80s, the weather service said.

Both Tuesday and Wednesday should offer clear skies and daytime highs also in the low 80s.

Barge off Long Beach surveys best route for wind-powered cable
Forecast: Snow is falling on parts of LI
On the front lines of omicron: It 'hit us like a tidal wave.'
Survey says: Omicron delays employers' back-to-office plans
Seniors Calendar: Events from Jan. 23 to Jan. 30
A community comes together to 'put food in the fridge that people will actually eat'
Didn’t find what you were looking for?