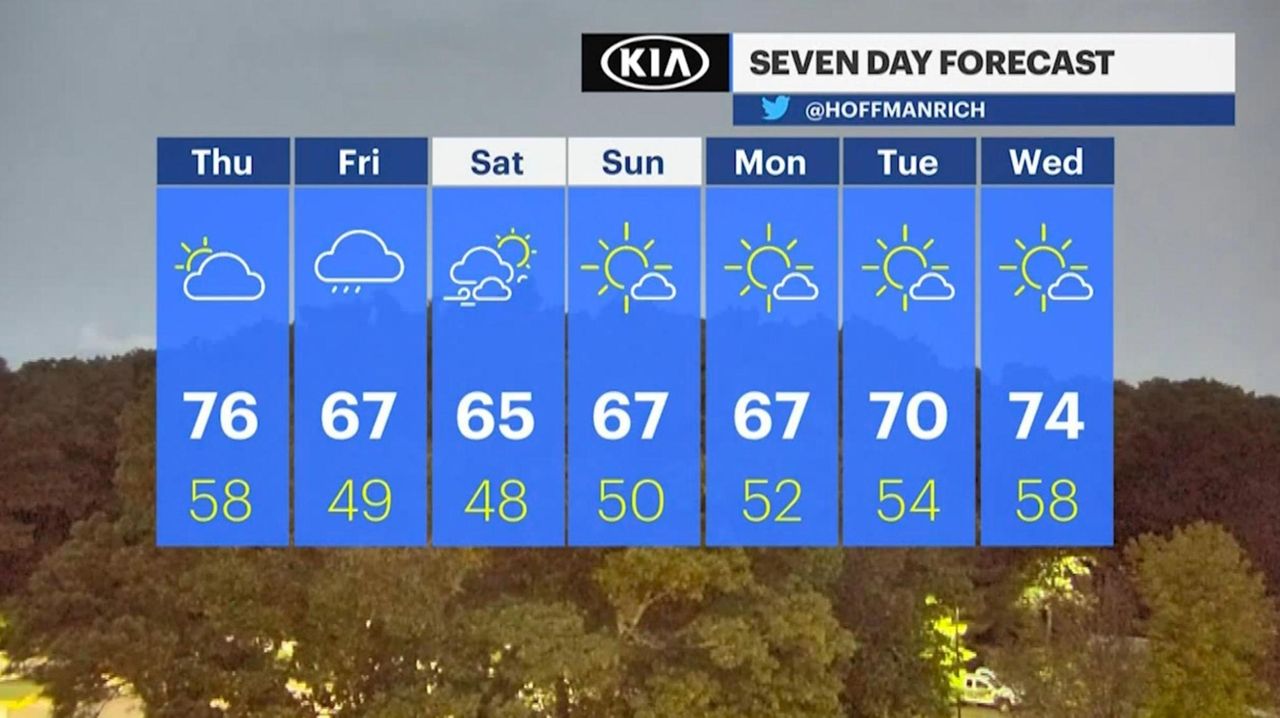 Partly sunny skies, with a high in the mid-70s, are expected Thursday on Long Island, with a chance of showers in the evening, mainly after midnight, and a low of 60 degrees. News 12 Long Island meteorologist Rich Hoffman has the forecast. Credit: News 12 Long Island

Thursday’s daytime high will be a comfortable 76 and the clouds are slightly deceptive as the National Weather Service in Islip expects no rain before the night and then the odds are just 40%.

The chances of downpours are the same on Friday but it will be a cooler 67 ahead of a sunny spell that runs all the way through the weekend to Wednesday.

Though Hurricane Sally, which the weather service warned brought widespread floods and record-setting rain to much of Georgia, has declined to a tropical depression over southeast Alabama, its tentacles may reach as far north as Long Island.

Thursday’s clouds can be pinned on the storm, one of a series pummeling the Atlantic this year. "Mainly dry conditions are expected today, however clouds will gradually increase from the south as the remnants of Sally move towards the Middle Atlantic states," the weather service said.

"A south to southwest flow will allow temperatures to climb into the 70s to near 80 across the NYC/NJ Metro areas," it added.

Ocean beaches on Thursday will present swimmers and surfers with a moderate risk of rip currents, it said. The possible showers that may arrive Thursday night and last into Friday are the result of a Great Lakes cold front encountering a much weakened Sally, the weather service said.

Though the weekend sunshine will only raise thermometers to the mid-60s, look for the daytime high to reach 74 by Wednesday.

And it is possible the Island may be at least tangentially affected by another developing storm, Hurricane Teddy, now 625 miles east northeast of the Lesser Antilles that could travel north — but stay well offshore — arriving off the coast of Virginia before dawn on Tuesday.

Possibly, "Teddy could make a left-hand turn into the East Coast. Both runs show this happening in Maine which is a bit too close for comfort," the National Weather Service said.

Schumer to Navy Secretary nominee: Prioritize cleaner water for Manorville
Three LI hospitals ranked among Top 50 in the nation
Police: Sharks spotted off Jones Beach one day after lifeguard reported possible bite
Shea on vaccine mandate: 'We are going to comply with the order'
LI towns praise Cuomo's low-vax ZIP codes plan
Budget-friendly Roosevelt touted for its community spirit
Didn’t find what you were looking for?