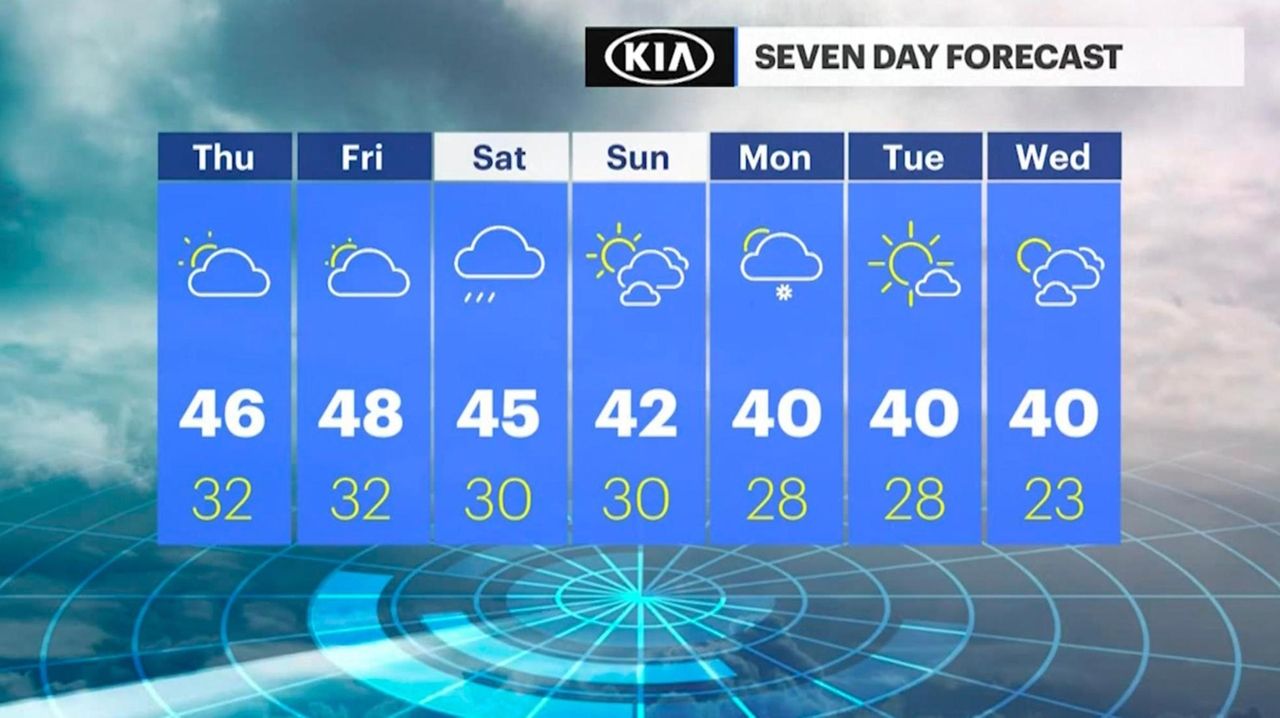 The National Weather Service said clouds on Thursday morning should lift away by the afternoon with high temperatures in the mid-40s expected. News 12 Long Island meteorologist Rich Hoffman has the forecast. Credit: News 12 Long Island

Clouds on Thursday morning should lift away by the afternoon or so, before returning and lingering into Friday, when they probably will cause downpours — but not until after 11 p.m., forecasters said.

As much as 1½ inches of rain could fall — mostly out East — or as little as half an inch. The rain could end as soon as sunrise on Saturday, the National Weather Service’s Islip office said.

Sunday and Monday’s Martin Luther King Jr. Day holiday are promising, with temperatures ranging in a tight band from the low 40s during the day to around freezing at night.

Highs are expected to be in the mid-40s Thursday through Saturday, the weather service said.

And yes, that is exceptionally warm for January.

"High temperatures today will be anywhere from five to 10 degrees above average," the weather service said Thursday.

The models the weather service uses increasingly agree the heavier rainfall expected in the East on Friday night might spread further west than initially expected, and there is even the chance of a snow shower or residual downpours in the afternoon — though they should be northwest of the Island.

And the fronts that drive the weather will be on the move.

"The cold frontal passage looks to bring in some drier air by Saturday afternoon with skies becoming at least partly sunny. Winds will remain fairly brisk and shift to the west by afternoon," the weather service said.

The Midwest will deliver another cold front as the weekend ends.

"The upper trough may spawn another low pressure to its east, but current model consensus keeps the low well offshore," the weather service said.

A trough, an elongated low pressure mass, can bring rain as moisture condenses as it rises.

"High pressure will then return Tuesday and possibly remain in place into Wednesday. Temperatures will be near normal early next week," the weather service said.

Highs are expected to be around 40 degrees Tuesday and Wednesday.

Mild temperatures may not linger for too long, however, should the polar vortex — frigid air around the Arctic —escape south to the Midwest as some forecasters predict.

Where to look for a COVID-19 test on LI
How much state aid will your school district get?
Forecast: With snow fallen, here comes the cold
Barge off Long Beach surveys best route for wind-powered cable
Survey says: Omicron delays employers' back-to-office plans
Seven LI students make finals of Regeneron science competition
Didn’t find what you were looking for?