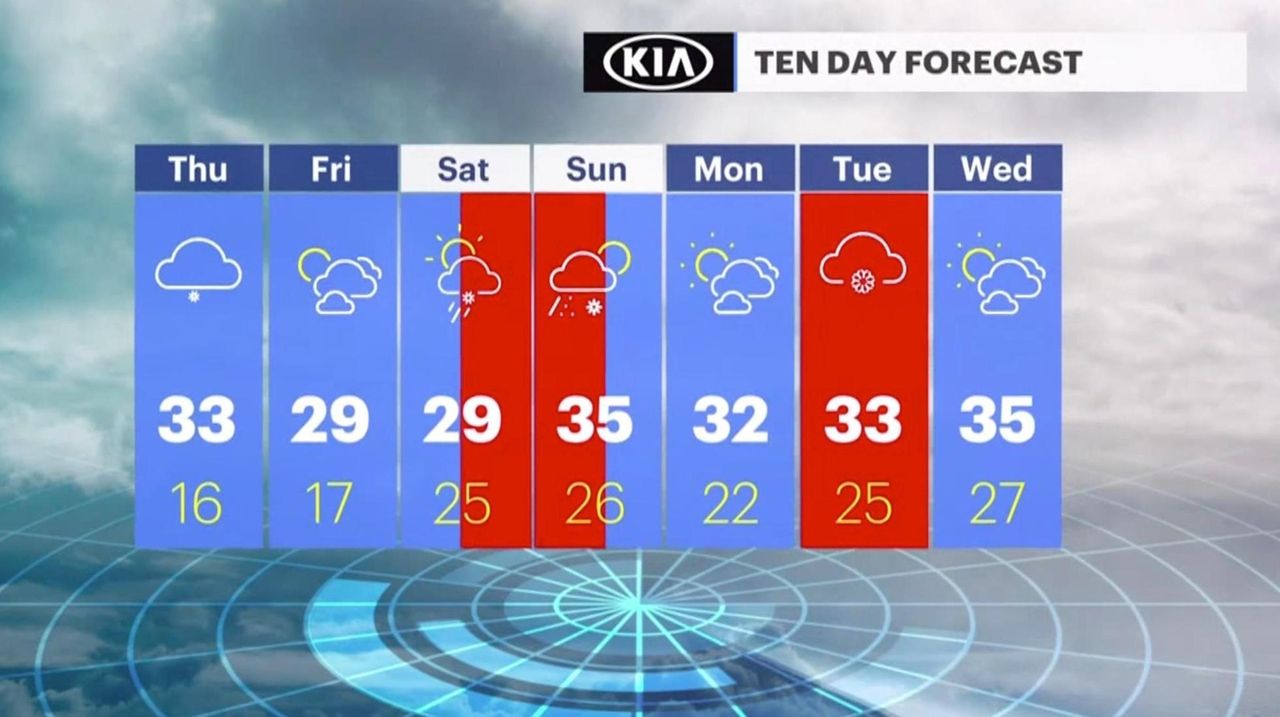 Thursday's chill will extend into Friday, when highs should approach the upper-20s under partly sunny skies. News 12 Long Island meteorologist Rich Hoffman has the forecast.

Long Islanders heading outdoors Thursday are confronting a wind chill of 15 to 25 degrees along with more than two inches of snow that fell overnight from the latest storm to cruise through the region.

But don't look for the sun to work any melting magic: "Overall, it appears that clouds will outweigh sunshine," the weather service said.

And the weather seems inclined to keep rapidly switching from fair to stormy into next week.

Another factor, however, will be rather constant: arctic cold.

While the daytime high for Thursday has been around freezing, the nighttime low will plunge to 16 degrees, the weather service said.

"There will be enough of a north wind most of the night closer to the coast as the high builds in, but with fresh snow pack it is possible that lows could be a few degrees colder" depending on how the winds develop, the weather service said.

Friday’s cold can be pinned on the polar vortex, which has pushed south, riding the jet stream.

"arctic high pressure will build southward toward the northeast on Friday, with dry and cold conditions expected," the weather service said. "Temperatures will largely stay in the mid and upper 20s for highs."

And that cold will linger: "Temperatures will continue below normal this weekend into early next week," the weather service said, with highs in the low to mid-30s predicted.

Look for a sunny Friday and a cloudy Saturday, and chance of more snow and sleet on Sunday, the weather service said.

If the latest trends continue, the weather service said, the storm may be "mostly snow inland and snow possibly mixed with sleet near the coast."

"Due to the cold low level air this system is running into, freezing rain is not out of the question," the weather service said.

Washington’s Birthday on Monday should be fair, however. Still, cautioned the weather service, "This looks to be short-lived."

On Tuesday, there could be another chance of a rain and snowstorm, though it should depart in time for sunshine to return on Wednesday.

The different systems developing in Canada, the Midwest and the South, and how they will interact, has impeded forecasts, the weather service said.

"An active weather pattern in the long term continues, but predictability with regard to specific details on precipitation types and timing of systems is low," the weather service said.

See how much snow has fallen in your areaCheck out our interactive snow map to see snow totals from across LI. Check the latest closings, delays on LIDozens of schools, districts and programs have announced closings ahead of today's snowstorm. Check the full list. See photos from this winter's stormsSee photos of snow that has fallen on Long Island during the winter of 2020-2021.

Hempstead man pleads guilty in Massapequa Preseve machete killing
1:31
Cuomo lifting pandemic restrictions: New York going back 'to life as we know it' after reaching vaccine threshold
1:39
LIers with weakened immune systems still wary of COVID-19
PSEG replaces steel pole damaged after crash on East End
Four Long Island districts back at polls today for budget votes
Nurse-practitioner comes back to LI to pay it forward
Didn’t find what you were looking for?