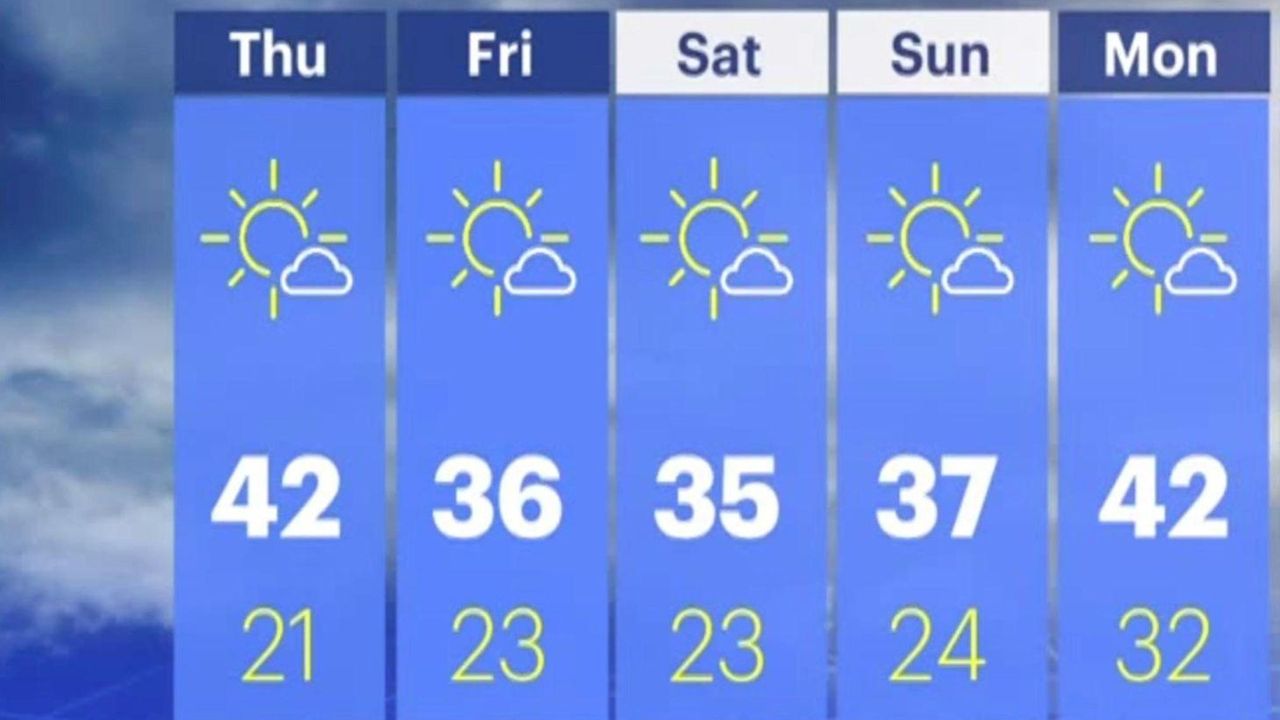 The National Weather Service said Thursday's forecast will be windy with a daytime high of 42 degrees, though once again it will be blustery with gusts clocking nearly 30 mph. News 12 Long Island meteorologist Rich Hoffman has the forecast.

Thursday will start with "a good deal of sunshine," the National Weather Service, and the clouds expected to roll in later do not herald rain.

And then look for a cold snap that will last into the weekend before it is replaced by an exceptional warm spell next week, when temperatures could soar to nearly 60 degrees. No rain or snow is expected for the next seven days, according to the weather service.

Thursday’s daytime high will be a mild 42 degrees though once again it will be blustery, with gusts clocking nearly 30 mph, the forecasters said.

The winds partly are caused by the tension between a low pressure system over the Canadian Maritimes and high pressure sitting over southern Canada and the upper Midwest, the weather service said.

"Therefore temperatures for today should average a few degrees below average due to the strong cold air advection despite sunshine," the weather service said.

The low Thursday night will plunge to 21 degrees. That is approximately ten degrees colder than usual.

The daytime high for Friday should hit 36 degrees. Once again gusts could hit almost 30 mph and the wind chill will make it feel like 20 to 30 degrees.

The same system bringing light snow to the Green Mountains and the Adirondacks is responsible for the chillier temperatures that will be seen on Long Island through the weekend.

"This will be in conjunction with cooler than normal temperatures there over the next couple of days, which should spread southward toward the Mid-Atlantic and Carolinas Friday as a cold front passes," said the Weather Prediction Center, which is part of the weather service.

Look for a clear Saturday with a daytime high of 35 degrees, followed by more sun on Sunday, when thermometers will hit 38, the weather service said. Lows on both nights will be 24 degrees.

Monday should be just as fine and just a few degrees warmer.

Then on Tuesday, a warm front should arrive as high pressure shifts to the South, the weather service said.

"The overall pattern evolution supports a significant warming trend next week, with temperatures possibly approaching 60 degrees away from the immediate coastline," the weather service said.