Thursday's snowstorm — the fifth major one of the season so far — is forecast to continue all day Friday and into the night. And while it's not the season's most powerful storm, it's lasting the longest — roughly 48 hours.

A Thursday night weather briefing said: "Any mix should become light snow early Friday morning with periods of light snow continuing through much of the day. Some sleet is possible near the coast during the morning commute."

And as temperatures drop and snow mixes with sleet and freezing rain, roadways and sidewalks could get a coating of dangerous ice on top of fallen snow, Johnson said.

A winter weather advisory issued by the National Weather Service runs until 7 p.m. Friday. That's considered a "long duration" event that will affect both commutes Friday.

Meteorologist Bill Korbel said the spotty snow on Friday is forecast to add an inch or two to Thursday's total.

"It won't end, really, until late Friday, the way it looks right now," he said.

The two-day system was the tail-end of a destructive winter storm that pushed east after bringing unusually cold temperatures and heavy snow to the South and West and leaving millions without power and heat. 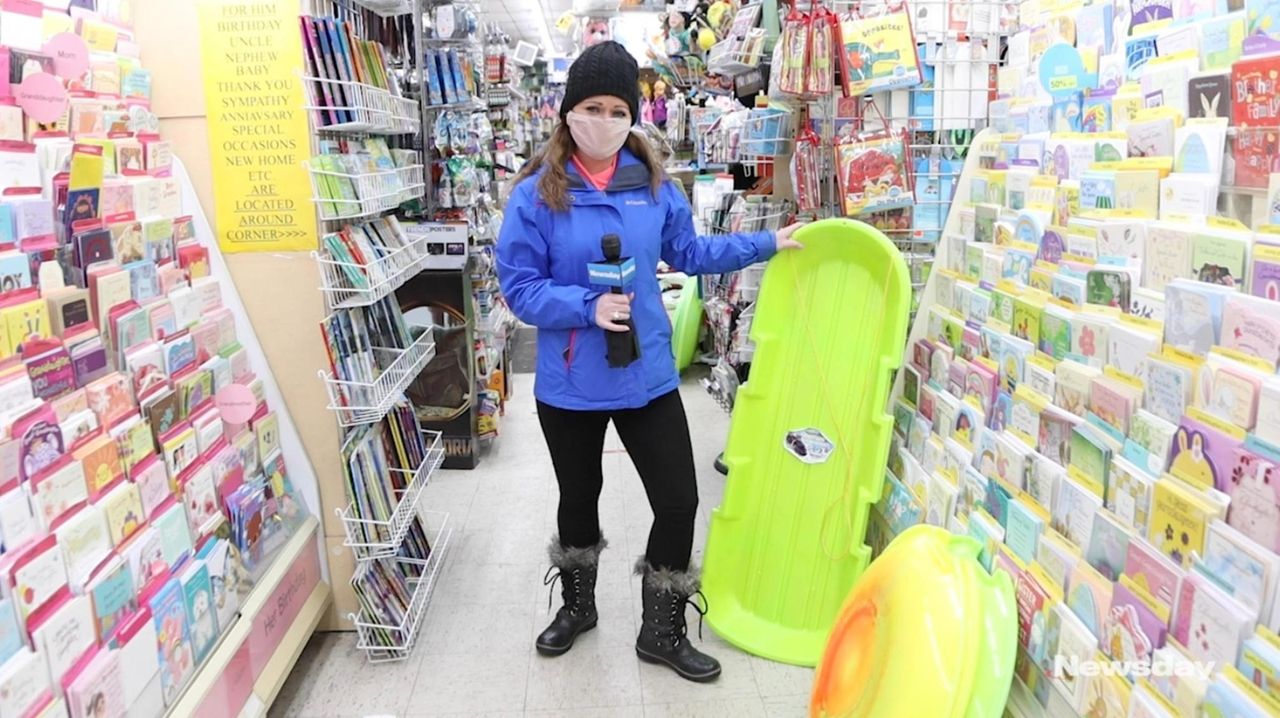 But while Long Island was spared in large measure, the winter weather, on top of the pandemic, was wearing some people down.

At the Golden Globe Diner in Huntington Village, owner Peter Tsadilas said it all had him worried about his customers.

Ruhel Ahmed, who works at the Middle Neck News and Convenience store on Middle Neck Road in Great Neck, had not seen many customers in the store Thursday, but he knew the reason.

As Kerry Kennedy shoveled snow to the curb, two large snow removal trucks went down New York Avenue in Huntington, pushing more snow onto where she had just cleared.

To get ahead of the trucks Thursday, Kennedy began shoveling her Huntington driveway as snowflakes steadily fell in the early afternoon.

"It’s really more of a nuisance because we are still trying to clear off all the other snow," Kennedy said. "I’m so sick of it already. I’m just ready for winter to be over at this point. I mean, the kids love it. But I’m ready for it to be over."

In Great Neck, where Rorie Miller has run Great Neck Diner on Grace Avenue with her father, Mike, for 10 years, she described the ongoing coronavirus pandemic and recent snowstorms as "a double whammy" to the business.

"We have a good takeout and delivery clientele," she said. "Because of COVID, people are scared. It hurts."

Steve Druek, owner of Druek’s True Value Hardware in Center Moriches, said he’s moved through lots of snow-centric inventory in the past few weeks, so much so that he’s been constrained only by the ability of supply trucks to get through.

"I’m always amazed at how many people aren’t prepared for a storm," he said, adding that a snow day may be the worst to shop for a sled. But his mood was good at midday Thursday.

"When you have a hardware store, you want snow," Druek said.

On Thursday, snow in Nassau ranged from 5.8 inches in Elmont to 2.9 in Syosset, and in Suffolk, from 6 inches in Deer Park to 2.4 inches in Upton.

With so many states coping with ice and snowstorms, officials had warned deliveries of coronavirus vaccines likely would be delayed and some testing sites shut.

And late Thursday, Gov. Andrew M. Cuomo announced the winter weather had caused a delay in federal COVID-19 vaccine doses scheduled for delivery to New York between Feb. 12 and Sunday.

Nassau is shifting Thursday and Friday appointments for the second dose of the vaccine to Monday, County Executive Laura Curran said Wednesday.

Suffolk County Executive Steve Bellone said Wednesday that the planned opening of a new mass vaccination site in Selden could be delayed if "extreme weather" conditions around the country push back the delivery of doses.

Area airports, meanwhile, advised travelers to check with their carriers beforehand. More than 100 flights were canceled Thursday at LaGuardia Airport as were 96 at Kennedy Airport, according to the FlightAware website.

The Long Island Rail Road did not experience any significant weather-related service issues and does not anticipate any planned changes to schedules, MTA spokesman Aaron Donovan said in an email Thursday afternoon.

NICE Bus said the system experienced delays across the system and one detour because of the snowstorm.

See how much snow has fallen in your areaCheck out our interactive snow map to see snow totals from across LI. See winter storm photos from around Long IslandSee pictures from across Long Island during the snowstorms of 2021. Share yours using #LISnow. Latest updates: Winter storm Day 2 on Long IslandA winter weather advisory is in effect until 7 p.m. Check the latest closings, delays on LIDozens of schools, districts and programs have announced closings ahead of today's snowstorm. Check the full list.