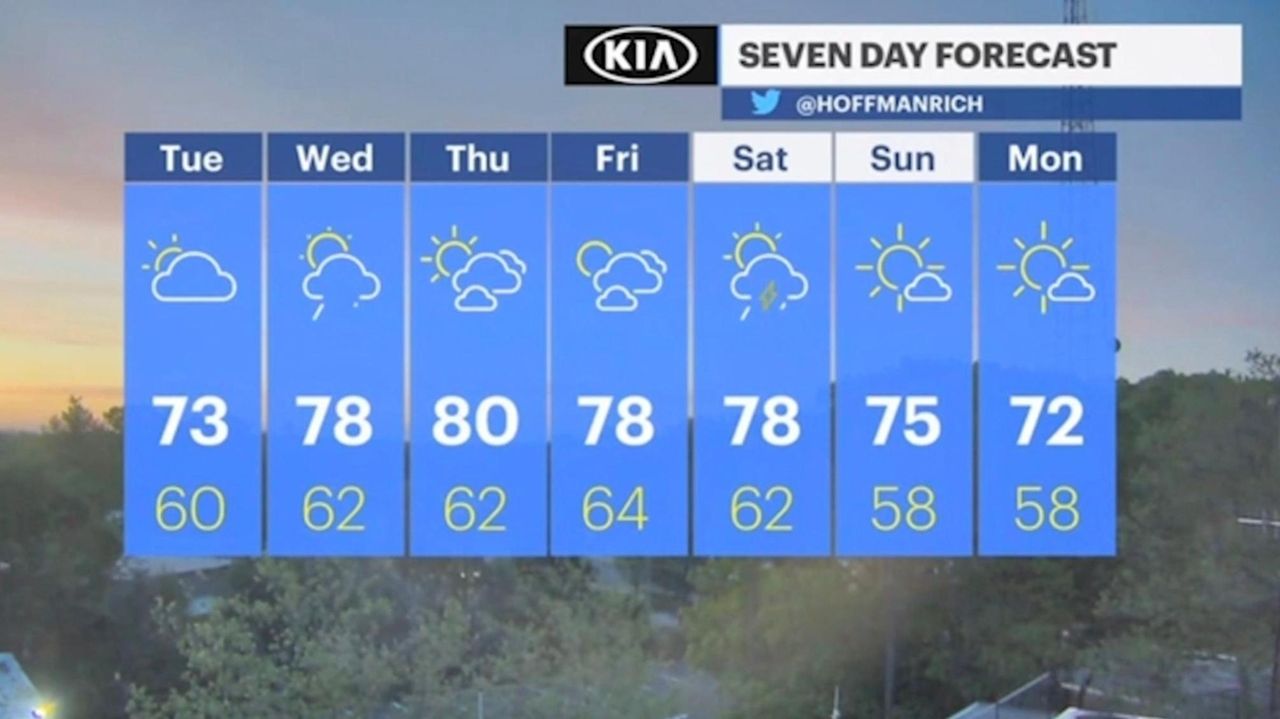 The National Weather Service in Islip said Tuesday’s daytime clouds could lead to possible rain arriving during the night, which will continue into Wednesday. Tuesday’s high will approach 70 degrees and there is a 40% chance of showers after 10 p.m. News 12 Long Island meteorologist Rich Hoffman has the forecast. Credit: News 12 Long Island

Tuesday’s daytime clouds will herald the possible rain arriving during the night, which will continue into Wednesday, the National Weather Service in Islip said.

And there is at least a chance of rain every day in the next seven days except for Thursday, Sunday and Monday. The weather service put out a briefing Tuesday saying there is a chance of severe storms Wednesday afternoon into the evening, as well as minor coastal flooding at high tide that could go through Friday.

The Wednesday storms could bring wind gusts of up to 60 mph, the briefing said.

Tuesday’s high will approach 70 degrees and there is a 40% chance of showers after 10 p.m., the weather service said.

“Lows will generally be in the lower to mid-60s, with upper 50s across portions of the lower Hudson Valley," the weather service said.

Showers and perhaps thunderstorms are likely after noon on Wednesday — and the day might begin on a soggy note before 9 a.m., according to the experts.

"A warm and more humid air mass will be in place Wednesday as a cold front approaches," the weather service said, predicting a high of 75 degrees.

"The cold front pushes south through the area by Thursday morning with showers coming to an end," the weather service said. The high is expected to be near 78 degrees Thursday.

Friday should be mostly sunny though there is a 30% chance of showers.

Saturday has the same odds of showers, the weather service said.

Daytime highs on both days should be in the mid-70s to low 70s — just like Sunday and Monday, which both should be sunny.