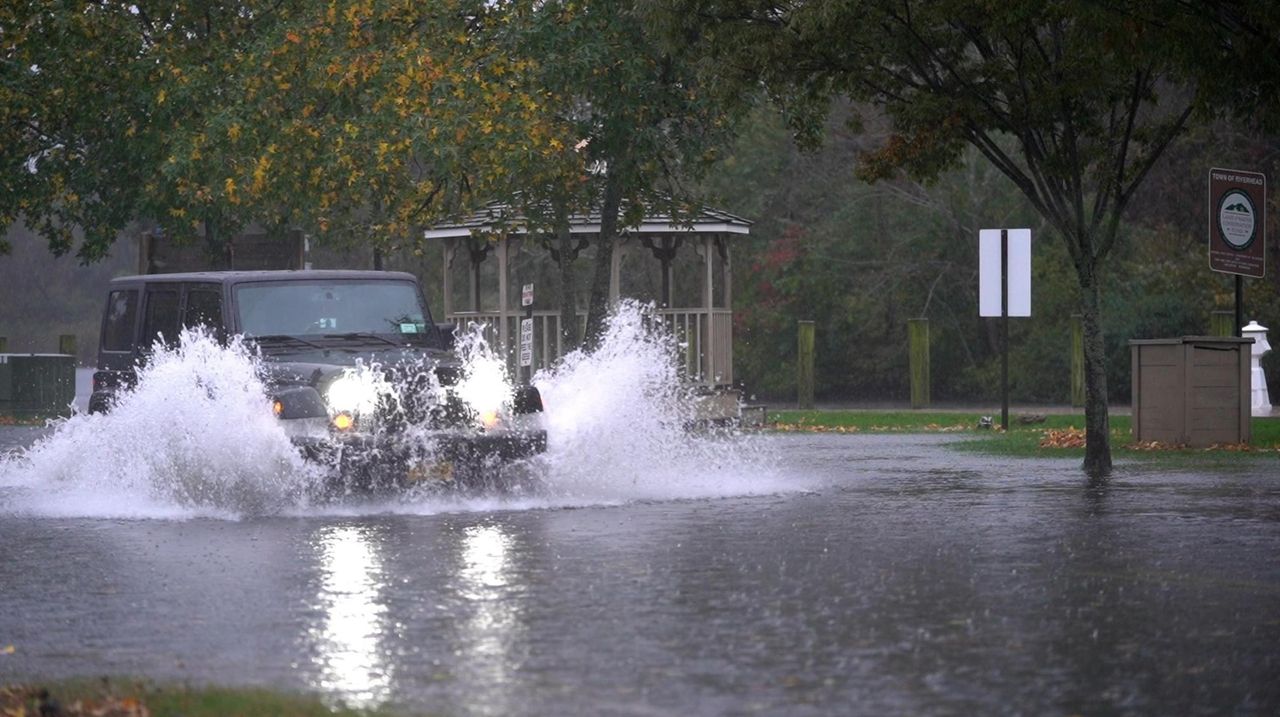 A fierce nor'easter will continue across Long Island Wednesday, supplanting most of Tuesday's rain with winds of up to 70 mph on the East End and conditions ripe islandwide for flooding, downed trees and power outages.

Winds on the East End overnight will hit between 35 to 45 mph, with gusts of up to 69 mph in Montauk, the weather service said. Areas further west will see winds of 20 mph to 30 mph with gusts of 55 mph.

A coastal flood statement for northern Nassau and northwest Suffolk will go into effect at 11 a.m. Wednesday and continue through 3 p.m., because of the afternoon high tide, according to the weather service.

The high winds are expected to last through Wednesday night, scattering unsecured objects and making travel extremely difficult, the weather service said. A wind advisory continues through 2 p.m., Wednesday with gusts between 20 and 30 mph, topping out at 55 mph in spots.

The storm was forecast to take a northwestern path through Nassau and Suffolk by Wednesday morning. Late Tuesday, the storm was parked in the Atlantic off Long Island, churning in a counterclockwise direction, according to satellite maps.

The bulk of the rain Wednesday will clear out by the afternoon but with high winds continuing, especially on the East End, the weather service said.

East End town officials said they had prepared for the brunt of the nor’easter to hit the North and South forks Tuesday night.

Officials said the already saturated ground could cause more trees to topple over onto power lines and block narrow roads.

Town officials said they saw some flooding Tuesday in Flanders and along Dune Road, and urged residents to secure private property, including tying down boats and pulling them out of the water.

"I’m concerned if the wind picks up and the saturation already, we could see an increase of uprooted trees and weakened branches leaning on power lines and knock it down to do a little damage," said Southampton Emergency Services Manager Ryan Murphy.

On the ocean, seas could reach 10 to 15 feet, and 3 to 6 feet on Long Island Sound, the weather service said.

The storm Tuesday dumped more than five inches of rain on parts of Long Island. Searingtown topped Nassau with 3.51 inches, and St. James led Suffolk with 5.35 inches, according to a weather service chart posted late Tuesday.

"Light to moderate rainfall is expected overnight before tapering to isolated showers by Wednesday morning," the weather service said. "Additional rainfall will generally be less than a ½-inch overnight."

Early Wednesday, area airports were operating but Twitter pages for Kennedy, LaGuardia and MacArthur airports advised travelers to check with their airlines about possible cancellations. PSEG Long Island was reporting just eight outages affecting 63 of the utilities 1,172,768 customers, according to the utility's website post just after midnight.

The Long Island Rail Road reported no major delays early Wednesday, although the Nassau Inter-County Express, or NICE, bus service advised that there could be delays, detours or route cancellations caused by heavy rain and possible flash flooding.

Riders were advised to check the Service Alert webpage or use the Go Mobile app to track real-time arrivals. Suffolk Transit also advised riders to allow extra travel time as buses could be running late.

Every storm is different, Bellone said, singling this one out for its length.

"We are looking at a storm that is going to be with us through midday Wednesday," he said.

"And of course, with a storm like this, you are talking about high winds and heavy rain — that is a combination that can produce significant power outages," he added, noting that work crews are clearing fallen trees and branches and high-axle vehicles have been deployed should flooding arise.

Acting Suffolk Police Commissioner Stuart Cameron urged caution on the roads, but said the storm had "limited impact" by Tuesday afternoon. There were no reports of major traffic problems in Nassau or Suffolk into Wednesday morning although some communities in both counties noted minor flooding.

Nassau County Executive Laura Curran, in a Tuesday storm briefing at the Office of Emergency Management in Bethpage, also warned of the saturated ground leading to falling trees and branches falling on power lines, causing outages.

"The rain will continue, but it will turn into more of a windstorm and … will continue falling until tomorrow," Curran said.

The forecast calls for the sun to return Thursday before another low-pressure system will appear Friday, bringing more showers that could last through Saturday.

Sunday, which is Halloween, looks clear, the weather service said.

See rain totals for LI communitiesHere are the latest available rain, wind, and snow measurements for the tri-state area provided by the National Weather Service's Upton office. See photos of the nor'easter's effects on LIA nor'easter brought a deluge of rain to Long Island on Tuesday, Oct. 26, 2021. Here are photos of the storm's impact from various places around Long Island.