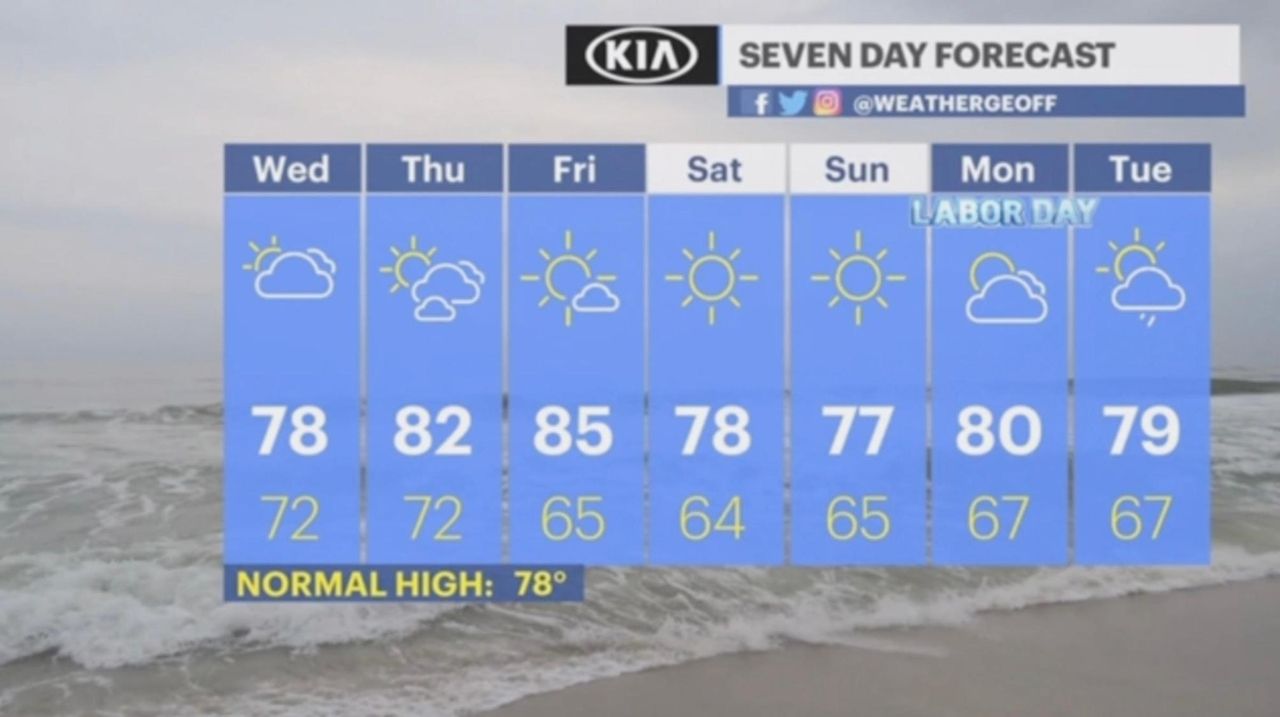 Wednesday’s showers — there is a 50% chance of rain after 8 a.m. — likely will diminish in the evening and Thursday, and sunny skies are forecast through Monday’s Labor Day holiday, forecasters said.

There is a high risk of rip currents at Atlantic Ocean beaches on Wednesday and a moderate risk on Thursday, which could worsen out east, the National Weather Service said.

Wednesday should be a cool 79 degrees and the weekend also will be a bit cool.

Currently, a high pressure area drifting down from the Canadian Maritimes will "ridge down" across the northeast coast Wednesday evening, the weather service said, bringing breezes to Long Island.

By Thursday, the downpour odds for Long Island are just 20% and the daytime high should hit 83 degrees, the weather service said.

Friday should be mostly sunny and a little warmer, with a high of 85 degrees during the day.

Mainly sunny skies are forecast for the Saturday to Monday period but thermometers likely will top out in the upper 70s, the weather service said.

Monday night clouds likely will deliver rain by Tuesday, when the odds of showers are 40%. Highs in the upper 70s are also expected on Tuesday.

The sultry summer of 2020 was Long Island’s second hottest, with an average of 74.6 degrees for the three months of the meteorological summer, the weather service in Islip said on Wednesday.

The record, set in 2010, was just two-tenths of a degree hotter, at 74.8 degrees, said John Cristantello, a weather service meteorologist.

Islip’s records date back to 1963. June, July and August are the meteorological summer months.

The astronomical summer starts on the longest day of the year, which fell on June 20 this year and ends on September 21.

Jurors in Thomas Valva case will consider video evidence, judge rules
1:37
'A weight and a blessing,' says daughter who takes over the reins at LI church
Gene Cook's name will appear on ballot, judge rules
Assembly panel will 'soon consider' impeachment articles against Cuomo
Judge: Spota, McPartland face 57 to 71 months under federal sentencing guidelines
Cases again near 600 on LI, hospitalizations up, NY figures show
Didn’t find what you were looking for?