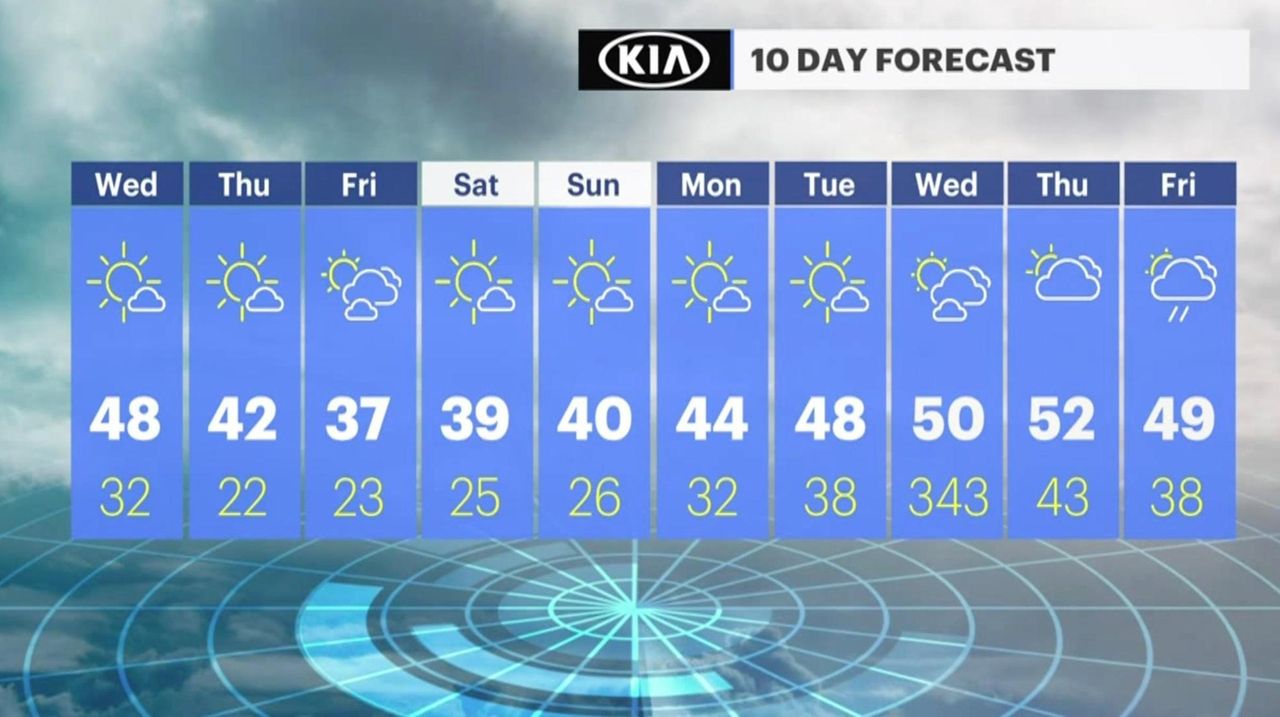 After a cold morning when the wind chill will make it feel like 20 to 30 degrees, Wednesday will bring on that spring-like warmth with daytime high of 48 degrees, the. National Weather Service said. News 12 Long Island meteorologist Rich Hoffman has the forecast.   Credit: News 12 Long Island

Wednesday’s sunshine will be a near-constant through the next week, with zero rain or snow forecast for the next seven days, the forecasters said.

And after a cold morning, when the wind chill will make it feel like 20 to 30 degrees, Wednesday will bring on that spring-like heat — unlike the day before, when high winds undercut the sun's warmth.

"By this afternoon temperatures will be a good 15 degrees warmer compared to yesterday," the weather service said Wednesday. "Look for temperatures to get to around 50 along the coast and into the metro area, with middle and upper 40s elsewhere."

With a cold front expected to travel toward Long Island on Wednesday, milder air will be "drawn up" as it nears, the weather service said.

But the arrival of the cold front will end the brief, spring-like warm spell.

"Temperatures quickly return to normal levels by Thursday morning with lows in the upper 20s north, and mainly lower 30s closer to the coast and metro," the weather service said.

The daytime high on Long Island should climb to 42 degrees Thursday. The wind again will be a factor, with gusts as swift as 28 mph anticipated.

Friday should be similar though slightly colder, the weather service said, with a daytime high of 37 degrees and wind gusts clocking in at 30 mph expected.

"Temperatures will generally average below normal into the weekend," the weather service said, predicting Saturday also will be sunny and chilly with a daytime high around 38 degrees.

Night-out socializing will require even warmer layers, as the weather service predicted, "Nighttime temperatures will generally be in the 20s through the weekend."

Sunshine is once again predicted on Sunday, with a slightly warmer high during the day of 40 degrees.

And then another warmer spell arrives, as a trough — which the weather service defines as an elongated area of relatively low atmospheric pressure — heads out to sea and an upper ridge forms over the east.

A ridge may be thought of as the opposite of a trough as it is an elongated area of high pressure, the weather service says.

"Temperatures then trend towards above normal levels early next week as the mean trough shifts offshore and the upper ridge builds over the eastern states," the weather service said.

So look for a sunny Monday, with a daytime high of 42 degrees expected, followed by an even warmer and also sunny Tuesday, when thermometers should nearly reach 50.