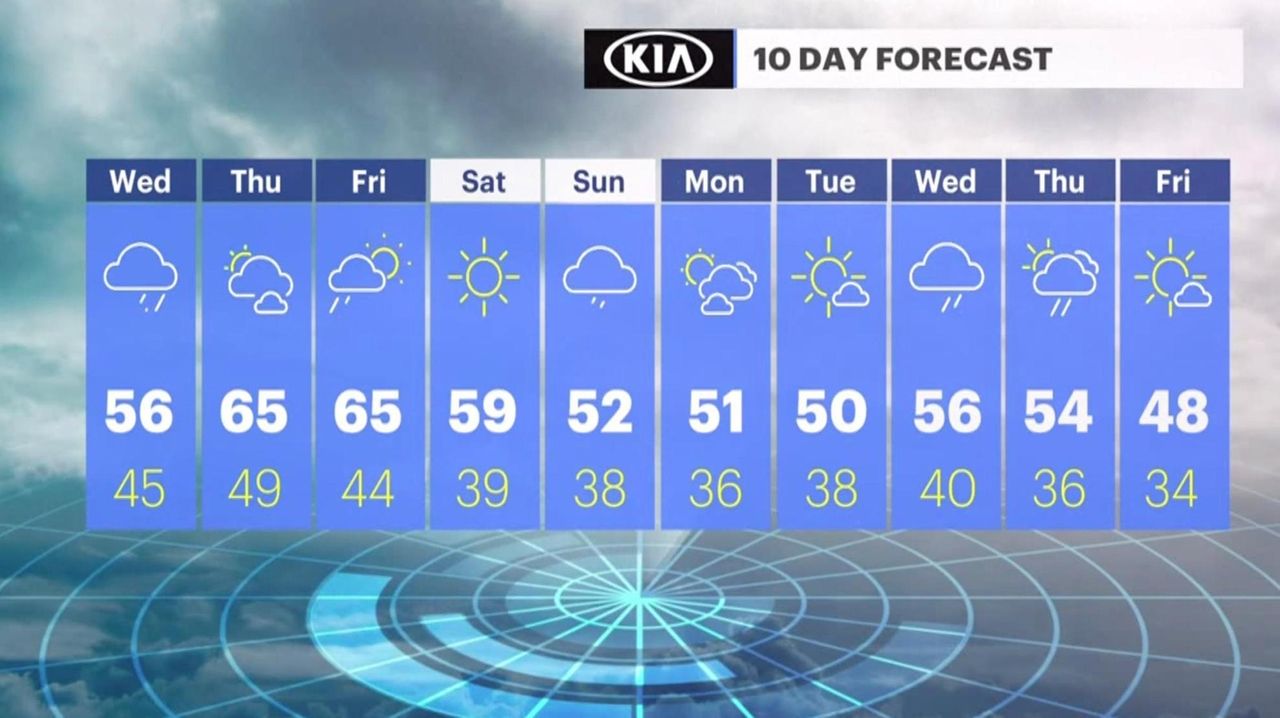 The National Weather Service said any fog Wednesday should burn off by mid-morning, but clouds may bring showers and the day time high may hit 54 degrees. News 12 Long Island meteorologist Rich Hoffman has the forecast. Credit: News 12 Long Island

Any fog Wednesday should burn off by mid-morning, but clouds may bring showers, the forecasters said.

The odds of rain during the day are 30% and the day time high may hit 54 degrees. And then patchy fog and rain — as much as half an inch — look likely Wednesday night, when the odds of precipitation are 80%, the National Weather Service said.

Then, while the mid-South is bracing for severe weather, Long Island may get off lightly. According to the Climate Prediction Center, which is part of the weather service, "once a nearby coastal low and its assortment of showers exits Wednesday night, a balmy air mass rolls in courtesy of warm southerly flow."

Thursday could once again begin with morning fog before the sun slowly appears. And temperatures could near record highs, the weather service said.

If clouds stay offshore, the weather service said, "This supports an unseasonably warm day with temperatures likely reaching the lower 70s away from the immediate coast...Forecast highs are under record highs for March 25 currently, but are close at a few of our climate sites."

The record high for Thursday at LaGuardia Airport, which was set in 1963, is 77 degrees. The record high at Kennedy Airport is 68 degrees, 66 at Islip, and 79 in New York City, the weather service said.

Friday could begin with rain before noon and the day will be breezy, with gusts hitting 36 mph. And temperatures could again reach into record-breaking territory, depending on how the winds develop.

"Temperatures in the middle 70s are forecast across northeast New Jersey, with lower to middle 70s in the NYC metro, and middle 60s to around 70 away from the immediate shore...If winds go westerly sooner in the afternoon, then it would not be out of the question for warmer temperatures even at the coast," the weather service said.

Saturday will be the first fully clear day. It is predicted to be sunny with a daytime high nearly reaching 60 degrees.

Sunday, however, has a 40% chance of showers that probably will last into the night, the weather service said. Highs will be in the low 50s.

Monday and Tuesday should be sunny, the weather service said, with highs reaching the low 50s during the day and night time lows in the upper 30s.