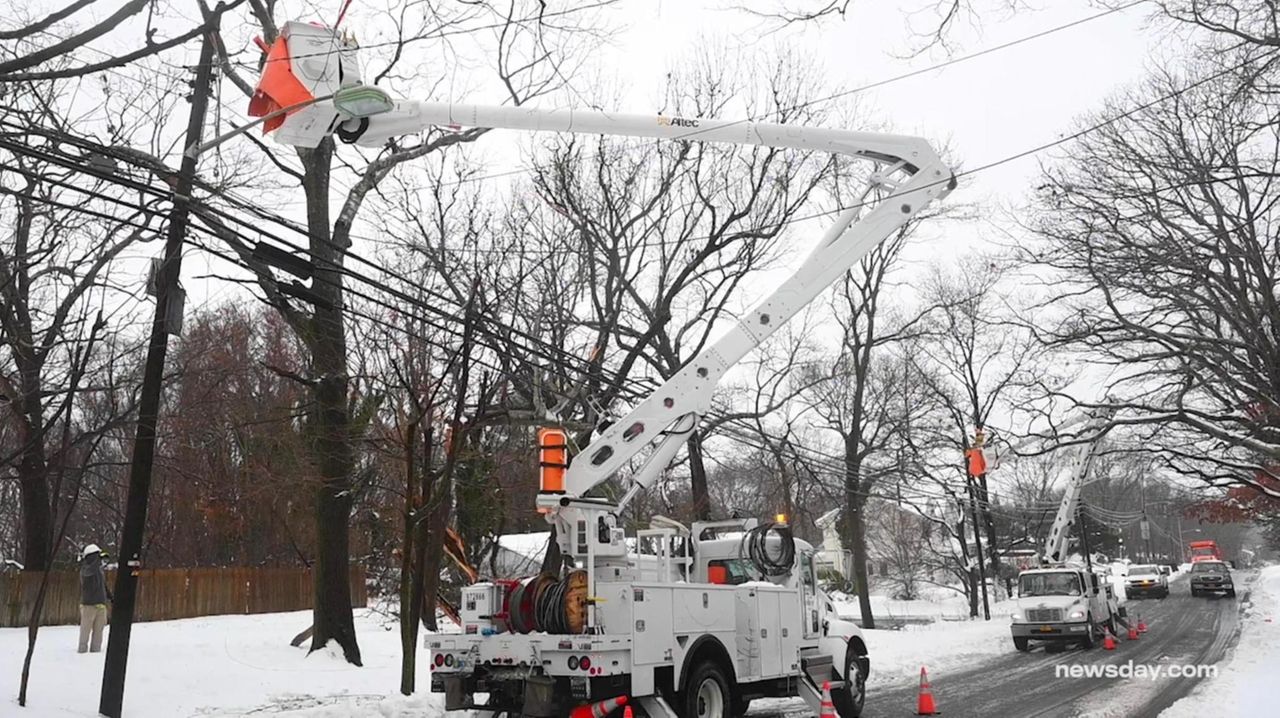 Power went out in parts of Hauppauge on Tuesday morning, but PSEG was on-site to restore it. Luckily, two Hauppauge residents both had generators to keep the heat on. Credit: James Carbone

PSEG Long Island is working to restore the last 27 customer outages from a Monday storm that impacted 21,000 customers, while monitoring for the prospect of heavy winds over the next 24 hours, the utility company said.

"We’re keeping an eye out," spokeswoman Ashley Chauvin said. "We’re on the lookout for possibly more snow and high winds throughout the day and evening. We’re more concerned about more potential wind than snow."

Nearly all of the 21,000 customers who lost power at some point during Monday’s snowstorm have been restored, and the remaining 27 who were out at 4 p.m. Tuesday are projected to be restored by 7 p.m. or sooner, she said.

One customer who lost power at 7 a.m. when a tree split and fell onto power lines is Dave Hubbard of Hauppauge. He said he received a text from PSEG within minutes of the outage, and the company beat its estimated restoration time of 11 a.m. by half an hour.

"It was a tree just up the street," he said. "I heard it go crack and crash, and womp, that took the power line down. It was only about an hour and there was a crew working on it."

Earlier Tuesday, Hubbard said, a separate explosion caused an outage for houses across his street, and the power hadn’t been restored before noon.

Hubbard, a retired software engineer, said he lost power during Isaias for about a day. He checked PSEG’s online map that August afternoon, saw the large number of outages and knew "I couldn’t have reported an outage."

PSEG has begun sending back some of the 400 off-island electric line crews that were brought to Long Island for the storm, Chauvin said.

And although most of the customers have had power restored, PSEG still has after-storm cleanup work to do, including making some temporary fixes permanent, she said.

Damage to the system was minimal, and the system "performed well," she said. There were no problems with the telephone and outage management computer system, which conked out during Tropical Storm Isaias, leading to more than a million dropped phone calls and the prospect that PSEG might lose its long-term contract to manage the system for LIPA, which owns the electric grid.

The snowstorm resulted in more than 300 separate outage locations that required crews to be dispatched across the Island. Most of the outages centered in Suffolk and the East End, where winds were more fierce.

"There were lots of scattered outages," Chauvin said. "We had crews deployed across the Island."