A powerful but slow-moving nor'easter hit Long Island with full force Monday morning, bringing roaring winds and plenty of snow, with the potential for up to 2 feet in Nassau as well as coastal flooding before the system finally moves on Tuesday.

Suffolk could get well over a foot of snow but the East End should get far less, with under six inches forecast, according to the National Weather Service. A winter storm warning for Nassau and western Suffolk continues through 6 a.m. Tuesday. A flood advisory for northern Nassau and northwestern Suffolk will start at 9 a.m. Monday and continue through 4 p.m., the weather service said. High tide Monday is 1:25 p.m., just as the storm throttles up, leading to flooding concerns, especially on the South Shore.

The storm will gather strength through the morning hours with a temperature about 28 degrees, forecasters said.

"Much of Nassau County could see 18 to 24 inches of snow," said Joe Pollina, a meteorologist with the National Weather Service in Upton. "Across Suffolk, we are looking at 12 to 18 inches. As we get further out east, snowfall forecast really drops off to as much as only 4 to 6 inches for Montauk."

The storm was predicted to last through Tuesday morning but the brunt of the snowfall will hit Long Island Monday, making for treacherous travel.

Pollina said the snow is expected to change over to a mix of snow, sleet and rain in central and eastern Long Island from late Monday morning through the night.

The weather service cautioned that the timing and location of that changeover is still a forecasting challenge, saying much of Suffolk presents the "greatest uncertainty in snowfall amounts due to low predictability" of the location of the rain/snow line late Monday.

Nevertheless, near "blizzard-like conditions" are forecast for some areas Monday through Tuesday morning. Sustained winds of between 25 mph and 35 mph are also expected along with gusts between 40 mph and 50 mph and higher on the East End.

Sunday night, New York City Mayor Bill de Blasio declared a state of emergency for 24 hours beginning at 6 a.m. Monday. All roadways in the city will be closed to traffic until 6 a.m. Tuesday. 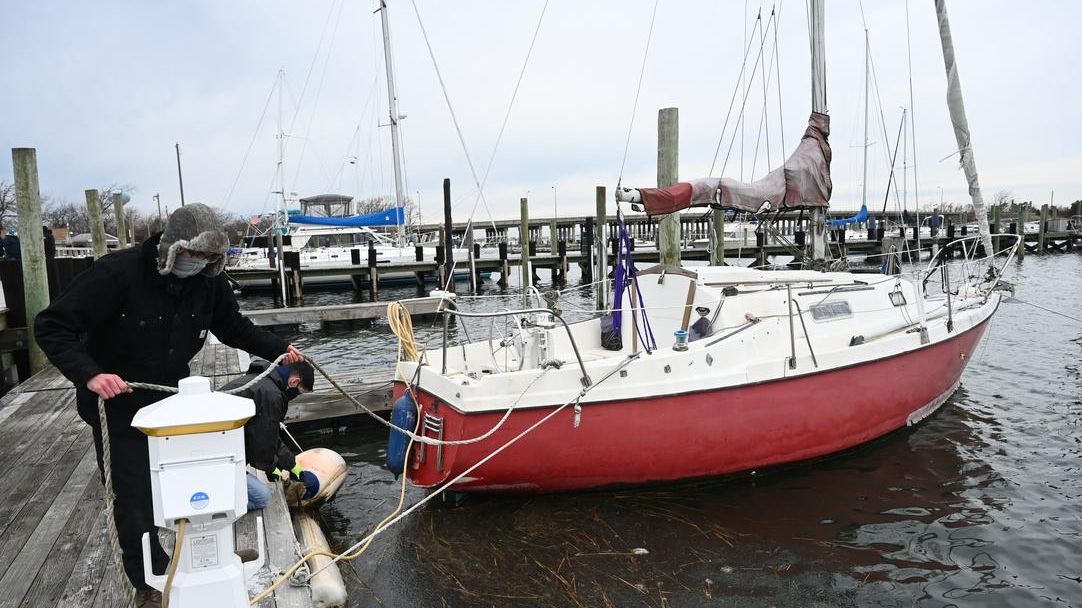 'Be safe, be smart:' Hempstead town supervisor discusses snow storm prep “Get your milk, get your bread, get your eggs … once this starts around midnight tonight, stay inside,” said Don Clavin says. Credit: James Carbone

PSEG Long Island is expected to bring in more than 400 line workers outside Long Island to help restore potential power outages as the company advised customers to prepare for that possibility. Just before 5 a.m., Monday the utility was reporting just two power outages affecting 15 customers.

The power of the storm could potentially paralyze transportation in the region and officials urged drivers to stay off the roads.

The Long Island Rail Road is paring back service Monday and Tuesday, and it may have to halt trains entirely due to the storm. It will run on a weekend schedule through Tuesday night, according to an MTA news release.

As of Sunday night, LaGuardia and Kennedy airports had canceled many of their flights for Monday. Just before 1 a.m. Monday, JFK Airport's official Twitter page said deicing and snow were ongoing. "But more snow is still to come so before you head to the airport," the tweet said. "Please contact your carrier for the latest information on delays, cancellations, and changes to your travel plans." 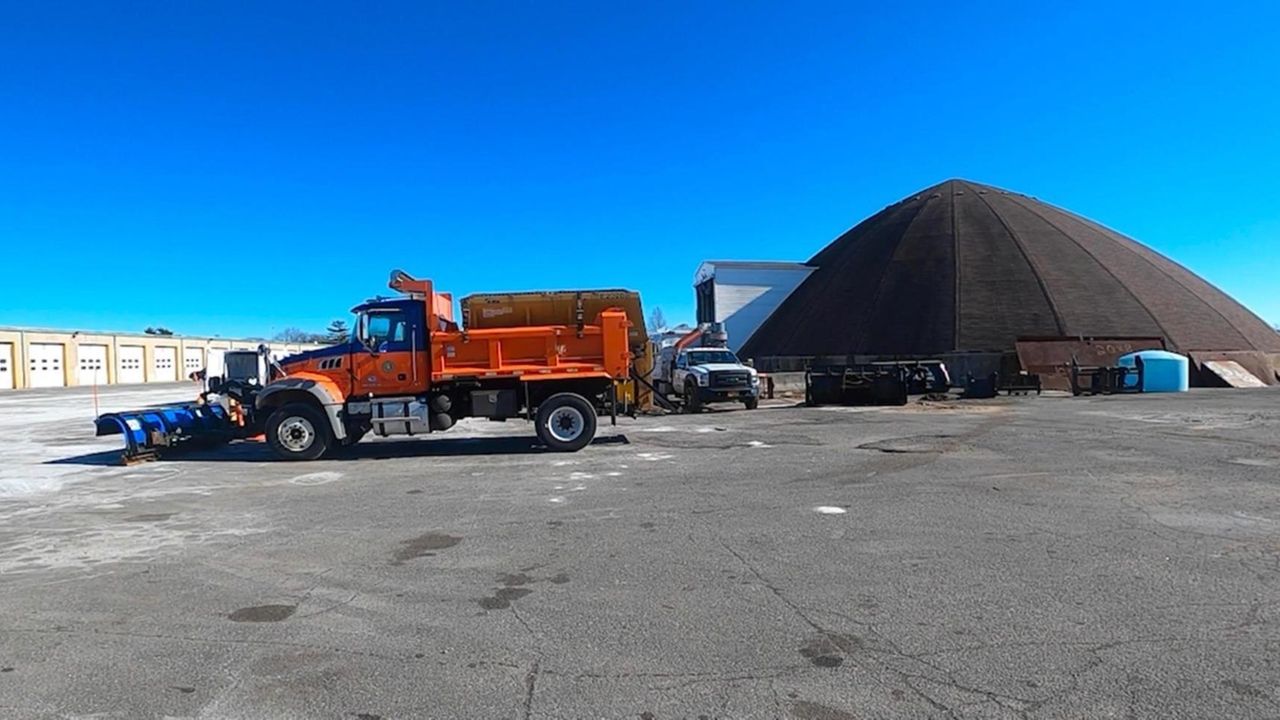 In a tweet on its official account, LaGuardia Airport reported about 81% of Monday flights had been canceled. "Travelers are urged to contact their airlines directly to confirm flight status. Also, we ask that ONLY those with confirmed flights head to LGA tomorrow," the tweet said.

At Long Island MacArthur Airport, airlines had canceled multiple flights. Southwest has already canceled its flights there through noon Monday.

Many Long Island schools will be closed Monday, while some have opted to move classes online. (Find a full list of school closings here). 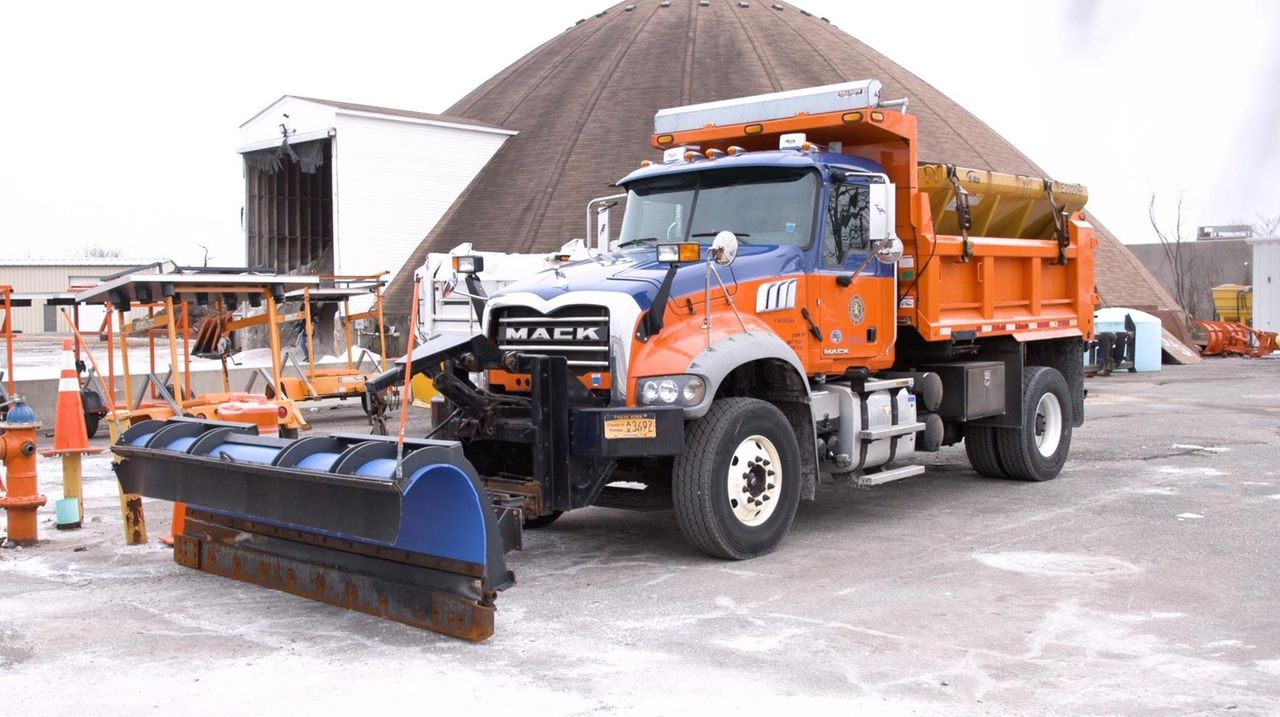 Suffolk County Executive Steve Bellone warned the impact of the storm could be felt for days if the predicted snow totals prove true.

"When you start getting up to these numbers, this is not a one-day event, this becomes a multiday event," he said Sunday. "It's going to take a lot to get these roads cleared once the snow stops."

The greatest threat of major coastal impacts along the southern and eastern bays. Flooding will likely start before the Monday night high tide and could remain well after, the weather service said.

And while temperatures will go up slightly from the deep cold of recent days, strong winds will make it feel between 10 and 15 degrees at times Monday.

Korbel: Biggest storm in almost 3 years headed our way Meteorologist Bill Korbel on Sunday forecasted a foot of snow in some areas of Long Island as the snow storm that's coming is going to, "...make a mess of Monday." Credit: Newsday / Matthew Golub

With both commutes Monday likely to be treacherous, state and county officials urged residents to stay home.

Cuomo said the whole state will be impacted.

"Statewide events are a problem for us because they don’t allow us to regionally deploy assets," he said. "If it’s only New York City and Long Island we get to send plows from all across the state downstate. If it’s only upstate, vice versa."

Cuomo said the state will have 1,600 plows, 300 loaders, 175 medium plows, 52 tow plows and 20 graders available. "As you know, since there are 100 year storms twice a year, we have purchased much more snow equipment, emergency equipment in general," he quipped.

Melissa DeRosa, secretary to Cuomo, said due to the weather the state is rescheduling vaccine appointments at the following locations for Monday: Stony Brook, Jones Beach, Aqueduct, Javits Center and Westchester Center.

Those with appointments will get emails/text messages with their new times and days to reschedule for this week, DeRosa tweeted.

Earlier, DeRosa said: "You’re guaranteed to get your appointment this week should we have to reschedule it for the snow." Stony Brook Southampton Hospital said it would close its Red Creek Park COVID-19 testing site in Hampton Bays Monday in anticipation of the storm.

Also in Suffolk, the Town of Riverhead issued a snow emergency Sunday night. The town hall will open at 11:30 a.m. Monday and Riverhead Town Justice Court be closed for the day, according to a news release from Supervisor Yvette Aguiar.

Nassau County planned to start salting roads around 9 p.m. Sunday in advance of the storm, which County Executive Laura Curran said could be "dramatic."

The county has more than 21,000 tons of road salt and 850 tons of sand available to fight the blizzard, Curran said at a news conference in Hicksville Sunday. She urged residents to stay home, if possible, given the likelihood of heavy snowfall and poor visibility.

"If you can hunker down for the next day or two, I would highly recommend that you do that," she said.

Hempstead Supervisor Don Clavin on Sunday warned the South Shore could be particularly vulnerable in the storm as heavy precipitation, a full moon and high tides will likely cause flooding in low-lying areas.

South Shore residents "are going to face not only a tremendous amount of snow, they're going to have flooding," Clavin said at a news conference at a marina in Point Lookout. "There's no way around it."

He urged residents to make the necessary preparations so they do not have to leave their homes during the brunt of the storm. City officials in Long Beach, where storm surge is expected to be about two to four feet at high tide, are also monitoring the situation.

Clavin said Hempstead will dispatch more than 400 vehicles to salt roads and clear streets during the storm. Meanwhile the Town of Oyster Bay said it has 10,000 tons of road salt and sand on hand with more than 300 plow and salt trucks ready to cover the town's nearly 1,000 miles of lane.

In Islip, Supervisor Angie Carpenter said schools announcing their closures early helps town officials set their game plan. If the schools were open, plowing them would be a priority. With them closed, they can focus on other high-trafficked areas, including major intersections and railroad stations.

Islip is preemptively closing its pre-K and after-school programs, Carpenter said. The town has a full salt supply and Carpenter expects to deploy about 200 vehicles.

Carpenter noted that keeping the roads clear is a "grueling" job.

"It's freezing cold. your wipers are going and half the time, you can’t see. Snows coming down. It's grueling," Carpenter said of plowing and salting the roads.

The task will be even harder if rain or slush is in the mix because it makes the snow heavier, she said.

Islip Town has 1,200 miles of road to plow as well as the commercial areas of MacArthur Airport, which require FAA-approved equipment, techniques and materials, Carpenter said.

"It's kind of a fine art when you're removing snow from airfields," Carpenter said.

New York City schools will be closed for in-person learning and food distribution sites at schools will be canceled Monday, Mayor Bill de Blasio announced during a news conference today. The mayor and other officials announced that Monday’s COVID vaccine appointments in the city will be rescheduled.

"Routes servicing the North Shore have been historically detoured or suspended due to road closures," according to a NICE news release. "As always, passenger and employee safety will remain the top priority for NICE Bus."

Service updates are posted on nicebus.com, the GoMobile app alerts, and Transit App.

Some schools delaying starts, going remote this morningSome schools will be delayed or operate remotely on Wednesday because of the snow. Explore our list of closures and delays to see which places of learning and programs are affected. Tips for weathering winter weatherWear layers, stop shoveling if you are having trouble breathing or experiencing chest pains and if you absolutely can't avoid driving, leave plenty of room between your vehicle and the vehicle in front of you. Forecast: Live radar and latest details for your areaCheck the hour-by-hour forecast and see future conditions. Snowstorms that buried LI over the past 100-plus yearsCheck out pictures from Long Island snowstorms from as far back as 1888.