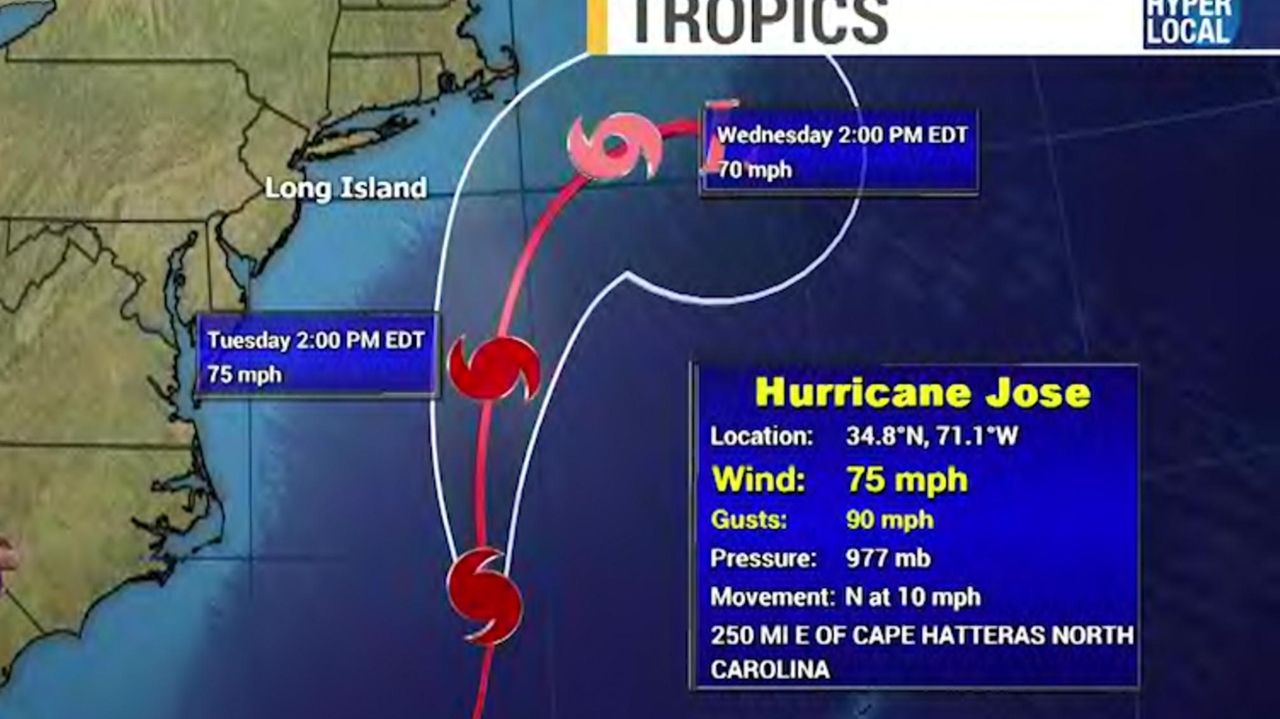 Long Islanders geared up Monday for Jose — a storm forecasters say is likely to spare the region its worst punch but could churn up wind gusts of up to 40 mph, coastal flooding and surf as high as 16 feet, particularly in the East End.

The category 1 hurricane lumbering up the coast is expected to be downgraded to a tropical storm by the time it starts dumping 1-3 inches of rain on the Island, primarily Tuesday night into Wednesday, according to the National Weather Service in Upton. A tropical storm watch was issued for Suffolk but canceled for Nassau because the closest Jose would get to the Island is about 165 miles southeast of Montauk, the service predicted.

High surf and moderate coastal flood advisories are in effect until 6 p.m. Wednesday and forecasters warned of dangerous beach conditions with a risk of strong rip currents into the weekend.

The Twin Forks are expected overall to take the biggest hit, forecasters said. There’s about a 40 percent chance that wind gusts could reach as high as 50 mph for far Eastern Long Island, the National Weather Service said.

“It’s going to be like a good nor’easter, especially if you’re out on the East End, and just an average, run-of-the-mill nor’easter the further west you go,” said meteorologist Pat Maloit at the service’s Upton office. “The big issue everywhere is the storm surge and the high surf and the beach erosion.”

But with the ravages of hurricanes Harvey and Irma still fresh in their minds, state, local and utility officials dispatched more resources Monday on top of those they had pre-positioned on the Island in the last few days.

Hundreds of emergency responders have been arriving. PSEG Long Island had called in 121 tree trimmers from its sister utility in New Jersey. Beyond the National Guard, the state also deployed boats and employees from the Department of Environmental Conservation, including uniformed officers, coastal engineers and spill response experts. Now with experience from hurricane operations in Florida, 13 members of the New York Task Force-2 Urban Search and Rescue Team were back on duty.

A storm of equipment and essentials also was Island-bound: zodiac boats, almost 1,000 feet of inflatable aqua dam, 252,000 bottles of water, 97,104 ready-to-eat meals and 29 generators, according to an announcement by Gov. Andrew M. Cuomo.

Cuomo also announced that the year-old Long Island Welcome Center, near eastbound Exit 51 on the Long Island Expressway in Dix Hills, would be closed to the public 9 p.m. Monday and turned into the emergency operations headquarters for Jose.

Why this hurricane season is so active

“I urge residents to make preparations now for tropical storm force winds which could cause some power outages and for coastal communities, prepare for flooding, especially during high tides,” Cuomo said in a statement.

Sustained winds could reach 25 mph and rain could be heavy at times, but authorities said the biggest problems are likely to be the surge and moderate flooding along the south shores of Nassau and Suffolk.

The combination of Jose’s winds and the new moon would cause dangerous riptides and higher than normal high tides, meteorologists said. That could noticeably eat away much of the beachlines and dunes and flood parts of the south shore in Nassau and Suffolk, meteorologists said.

At 11 p.m. Monday, the center of Hurricane Jose was about 235 miles east of Cape Hatteras, North Carolina and moving north at about 8 mph. It was expected to turn to the northeast Tuesday, according to the National Hurricane Center.

Could Hurricane Jose come to LI? See the cone of uncertainty.

State park and local officials there monitored the shorelines Monday for early signs of erosion and hustled trash cans, lifeguard stations and anything else that could be blown away indoors.

Already some flooding and 6 to 8 foot waves were being reported Monday at area state parks, with officials in the East End warned of 3 to 5 inches of rain.

The worst of the rain, wind and flooding were still forecast for late Tuesday into Wednesday, meteorologists in Upton said. An outer band of heavy rain could also arrive early Tuesday for Suffolk County and impact the Tuesday morning commute, they said.