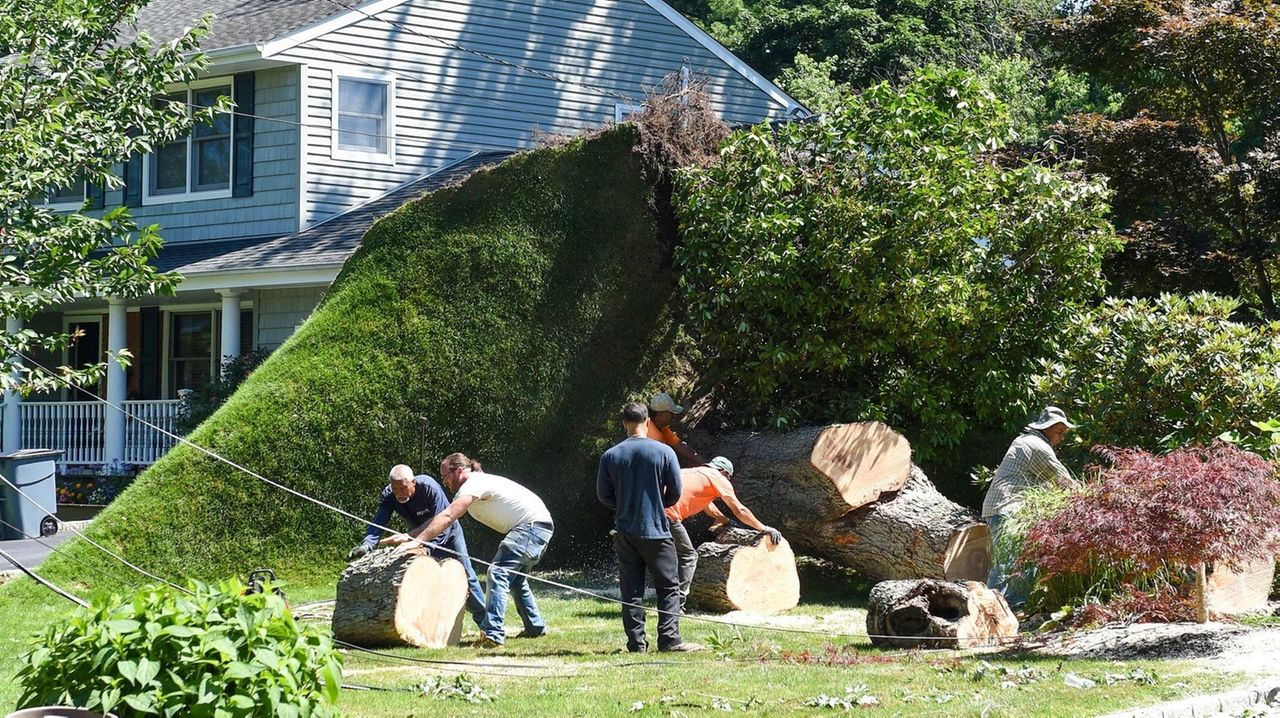 On Monday, PSEG President and COO Daniel Eichhorn said he hoped to have power restored by Wednesday to all residents affected by Sunday's storm. Credit: News 12 Long Island; Alia Yassen

This story was reported by Rick Brand, Robert Brodsky, Megan Dollar, Mark Harrington, Patricia Kitchen and John Valenti. It was written by Brodsky.

Thousands remained without power Monday night and PSEG Long Island, helped by crews from New Jersey and across the state, vowed to restore all electricity within 48 hours after a deceptively powerful Sunday storm carved a damaging path through the heart of Suffolk County.

“We understand the inconvenience and severity of what it is to be out of power,” said Daniel Eichhorn, PSEG Long Island's president, at a Monday news conference in Commack. “The more resources we have the sooner we can get to the last customer. …We won’t sleep until we’re all back.”

Eichorn said most of the remaining work will be completed Tuesday but as many as 9,000 customers living on dead-end streets, or who have problems that affect only a single residence, could be delayed until Wednesday.

One storm hit the Huntington area east into Commack; another sliced through Bay Shore east to Oakdale, and a third barreled through the North and South forks, said Tim Morrin, observation program leader at the National Weather Service in Upton.

The storms were nearly as shocking to those in their paths as they were damaging.

Thunderclaps and powerful gusts ranging from 40 to more than 60 mph toppled deep-rooted trees onto houses and vehicles and knocked out street lights. Boaters enjoying calm, glassy water conditions moments before under midafternoon sun, found themselves desperately trying to secure their crafts from a quick torrent of powerful waves.

Eichorn said the sheer volume of the damage from downed trees and powerful gusts led the utility to summon an additional 429 crews from upstate and New Jersey. Con Ed workers are also assisting in efforts to turn the power on again, Eichorn said. PSEG Long Island officials said they have hired local tree trimming crews, switched their 2,000 employees to storm mode and requested another 200 workers through Gov. Andrew M. Cuomo’s office.

Suffolk police said a female paddleboarder drowned in rough water during one of the storms off Timber Point. The identity of the woman has not been released. In Connecticut, the storms injured six people and killed a 54-year-old Fairfield man when a tree fell on his car and inured his wife and adult daughter, officials said.

County Executive Steve Bellone said the storm, which interrupted a day when many residents were at parks, beaches and the pool “caught everyone unaware.” Unlike blizzards and hurricanes, he said, there was no advance warning to allow PSEG to put emergency resources in place.

Bellone said he was with his family at the Babylon Village pool when the storm hit, causing several hundred people to seek shelter and turning the facility into "total chaos" in a matter of seconds.

The storms, which were below hurricane strength, occurred as a cold air mass, forming at a high altitude, was confronted in the jet stream by warming, humid air mass below, Morrin said. The "atmospheric instability" created vertical storms with strong straight-line winds and downbursts, with spots of hail in some areas, he said.

"Call it 'spokes of energy,' " Morrin said, "almost like a bicycle tire spinning in the atmosphere. One moved through in the early afternoon. One more came through in the middle-to-late afternoon and then one later farther east that just impacted the Forks."

As of 9:45 p.m. Monday, more than 10,500 customers still had no electricity in an area that roughly spanned the Nassau border with Suffolk to East Hampton, with the bulk of the outages stretching from Huntington, Commack, Smithtown, Bay Shore and other Suffolk communities. Huntington incurred among the worst of the storm with nearly 500 trees toppled or damaged and 12 boats misplaced, said Town Supervisor Chad Lupinacci. In Commack, dozens of large oak trees were completely uprooted by winds, collapsing onto roads, homes and power lines.

PSEG Long Island set up customer outreach centers at the Mayfair Shopping Center on Jericho Turnpike in Commack; on Islip Avenue in Brentwood and on Pulaski Road in Greenlawn to provide customers with ice, bottled water, snacks, battery recharging stations or to cool off in air conditioning.

Alia Yassen, 37, of Northport Village, spent much of Monday in Kings Park after a tree landed on her mother's patio. Yassen, who runs a custom makeup artistry business, said she arrived home Sunday as the storm was whipping up. When she opened the door to go inside, Yassen saw “the whole storm rolling through. The whole bay was white from all the fog and rain."

The clouds, she said, lasted less than 10 minutes but the system "was very destructive.”