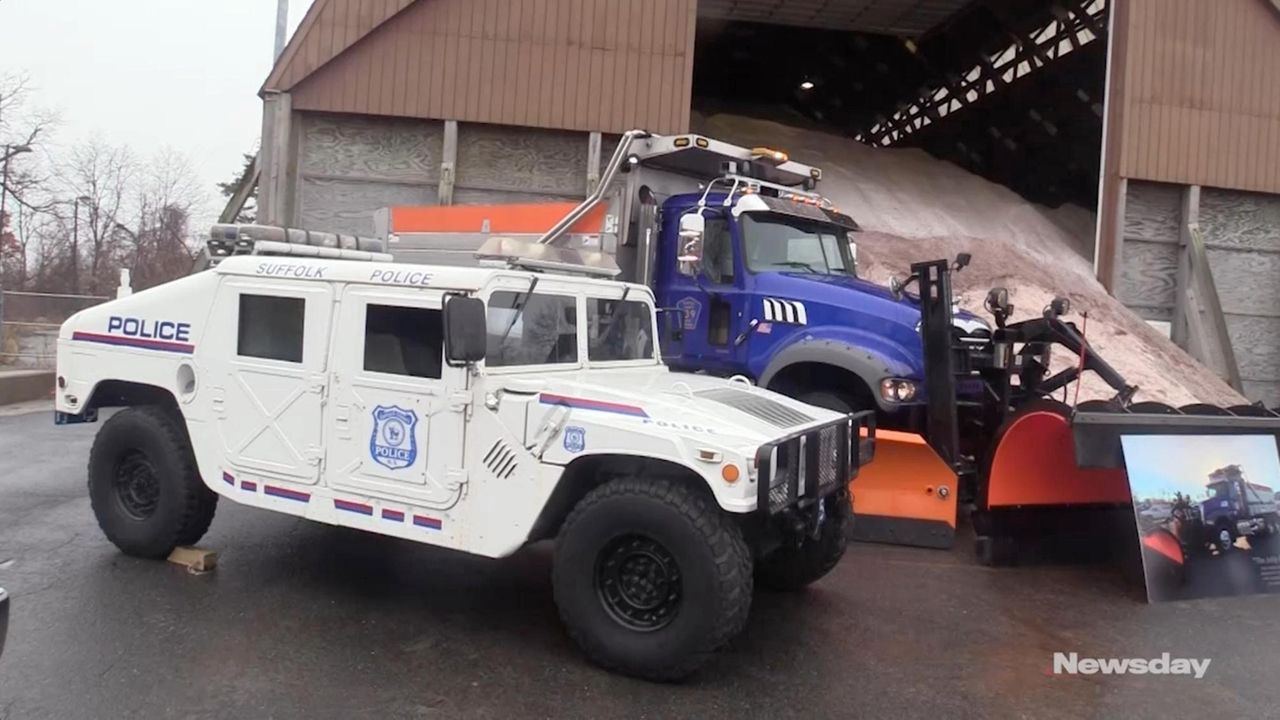 On Tuesday, Suffolk County Executive Steve Bellone announced additions to the fleet of snow removal equipment, which include six new Mack truck snow plows with salt and brine capabilities, and the start of construction of a new salt barn. Credit: James Carbone

Motorists stranded during blizzards in Suffolk will be extricated more swiftly and safely now that police have four trucks with power winches, officials said on Tuesday, demonstrating this and other new snow-fighting equipment ahead of Sunday’s possible snowstorm.

“It’s extremely perilous and dangerous for someone to be stuck in snow, especially if there are kids in the car,” Suffolk County Police Chief of Department Stuart Cameron told reporters.

Not only can stuck cars delay or prevent snow plows from clearing roads, these rescues also put officers in danger, he said at a news conference at Suffolk’s public works department in Commack.

There always is the risk that another motorist driving on snow-covered roads or in a blinding storm will hit either the officer or the motorist they are aiding, he said.

Officers sometimes must either park by the motorist to keep them safe until a tow truck arrives — though those drivers might not venture out during blizzards —- or haul the car out themselves. But simply hitching them together can damage both vehicles, Cameron said.

"In our emergency services unit, we have five rescue trucks, and they have 1,200-pound winches with 150 feet of cable,” she said by telephone.

A spokesman for the State Police based on Long Island said their force has one high axle vehicle equipped with a power winch, plus a Humvee, which lacks that feature but does have heavy duty hook-ups.

In addition to the power winch, County Executive Steve Bellone showcased one of Suffolk’s new yellow payloaders. For the first time, they also have snow blowers.

The new feature is especially useful in the East End’s flat areas, as the blowers can more than double how far the snow is tossed, to as much as 15 feet off to the side, decreasing the odds of the wind blowing it back onto the pavement, officials said.

Also on display were two new blue 10-wheel Mack trucks, which in another first, are equipped with wing plows that can greatly expand the path they can clear.

They have another new feature: they pre-mix the salt they spread with water, which means less of it bounces off roads, sparing the environment, and it reacts faster, officials said.

Bellone pledged not to be caught off guard, either by the latest forecasts, or, as the county’s purchase of the new equipment demonstrates, a recent pattern of increasingly intense storms.

“After 20 years of doing this, I know the weather can change even in a few hours,” Bellone said. “It’s a constant effort to figure out how to upgrade our operations.”

Cameron said observing the damage done to both the police truck and the stranded motorist’s car when they are simply hitched together, led him to come up with the idea of using the power winch.

Unlike roping the vehicles together, and having the officer gently accelerate, the power winch distributes the force much more evenly, protecting both vehicles, officials said. There is no strong jolt as the stranded vehicle is freed.

Suffolk’s anti-snow program includes a $2.63 million upgrade of its salt barn and other improvements at its Nichols Road facility in Brookhaven, an important strategic location for sending plows out. That project should finish in June, officials said.

Suffolk already has five of the Mack trucks; three arrive next week; another four might arrive as soon as the spring, officials said. Each truck costs $250,000; a federal grant paid for the first five. Suffolk is spending its capital on the rest.

And each winch costs $2,200, officials said. They are funded through forfeitures and are being installed on the police force’s Ford 350 police trucks.