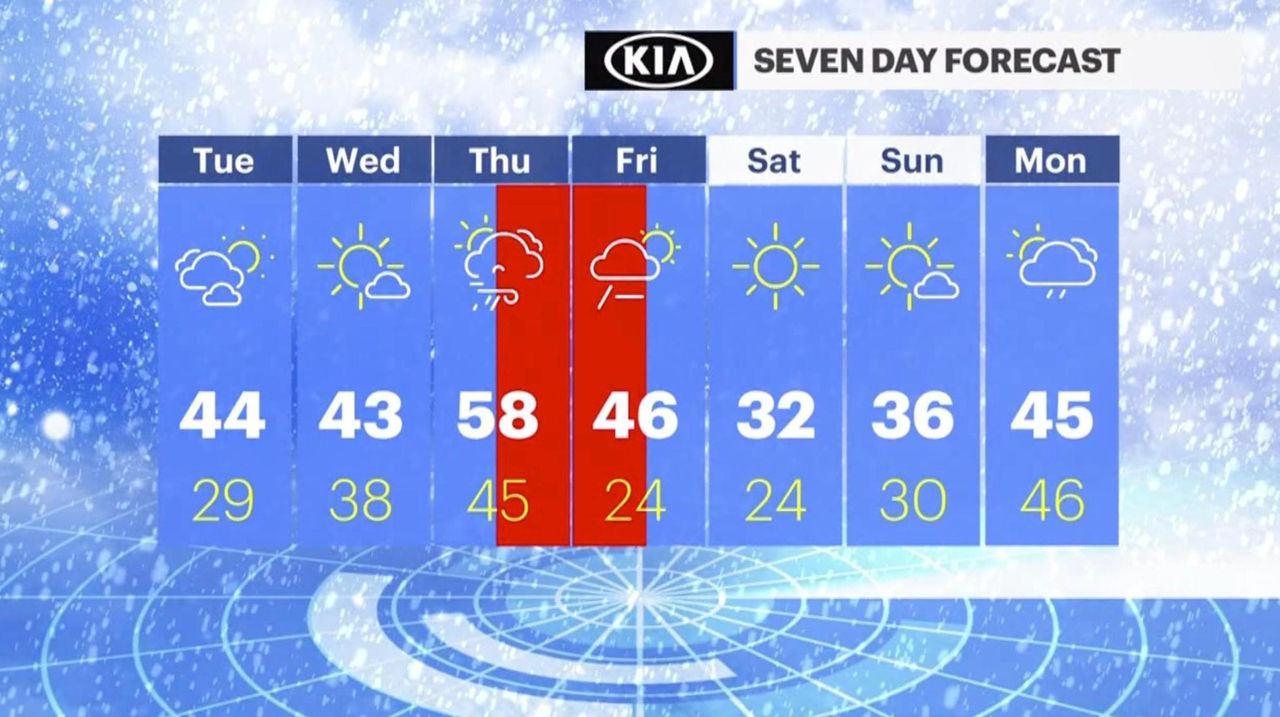 As much as two inches of rain could fall during the powerful Christmas Eve storm that may bring damaging winds and cause flooding, especially in interior sections, which the lingering snow may worsen as it melts, the National Weather Service’s Islip office said.

The hazardous weather outlook that begins Friday morning includes damaging winds that could be as swift as 85 knots — nearly 100 mph — depending on which computer model proves more accurate.

Gale force winds over the ocean could cause seas to build as high as 16 feet.

Before those possible hazards, look for balmy temperatures Tuesday and Wednesday with thermometers hitting the mid 40s. Thursday could be exceptionally warm — as high as 58 — and the odds of rain that night are 60%.

Temperatures should top out at 46 on Christmas Day before zooming down to 24 that night. It will be a sunny and not particularly cold weekend, as temperatures reclimb to around freezing on Saturday and Sunday, and spike anew on Monday to the mid-40s.

During the Christmas Eve storm, "The strongest winds are most likely to occur along coastal areas, such as Long Island, New York City, and coastal Connecticut where the potential exists for wind gusts 50 to 60 mph," the NWS said.

However, "There remains a fair amount of uncertainty in both the location of heaviest rain and the magnitude of the winds," it said.

Though as of now it is too early to predict, it is possible lots of rain may reduce those winds, echoing how an unusual Nov. 15 tornado watch did not produce one of these violent systems — but the storms still left thousands without power.

The cold front, a low level jet and other factors may produce what the NWS calls a "squall line" on Thursday night.

That is a line of storms that may be notable for heavy rain and wind, according to the Norman, Oklahoma-based National Severe Storms Laboratory, part of the National Oceanic Atmospheric and Administration.

During the Thursday night storm, "This band of rain may be able to mix down some of the higher winds," the NWS said on Tuesday.

"If this type of rain band/squall line materializes, the winds would effectively weaken considerably once it passes, similar to what occurred on November 15." Winds topped out at 54 mph during those storms, according to the NWS data.