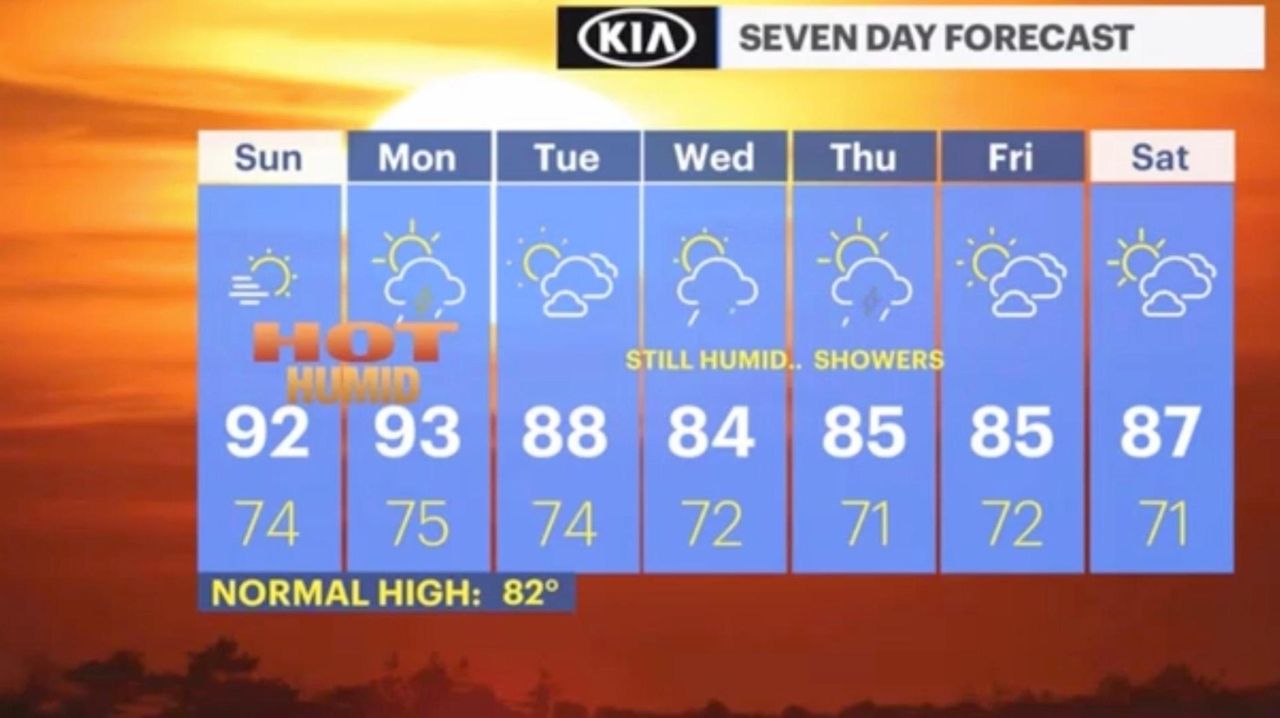 Long Islanders this week will see plenty of summer heat, with afternoon showers and thunderstorms possible Monday and an even better chance for some much-needed relief Wednesday and Thursday.

Monday is expected to be a scorcher, with temperatures nearly 10 degrees above average and a heat index of 102, the National Weather Service said in its Sunday regional summary. Temperatures will hit 95 for most of the Island, but be slightly cooler along the South Fork.

A heat advisory that went into effect Sunday is expected to continue through 8 p.m. Monday, the weather service said.

There is a 20% chance of thunderstorms after 3 p.m. Monday.

Tuesday looks to be mostly sunny with a high near 91 and an overnight low of 74.

The temperature cools slightly Wednesday with a high near 85 and a 60% chance of thunderstorms and showers. Thursday looks to be partly sunny with a high of 86 and a 30% of showers and thunderstorms, according to the weather service.

Sunny days are predicted for Friday and Saturday with a high in the mid-80s.

Staying indoors with air conditioning is recommended this week — especially for anyone whose health is frail. The New York State Department of Health recommends limiting strenuous outdoor activity to reduce adverse health impacts.

Those venturing out Sunday should stay clear of several beaches. In Nassau, Nickerson Beach, Lido, Lido West and Point Lookout all reached capacity before noon on Sunday amid the sweltering heat, according to a news release from the Nassau County Police Department.

In Suffolk, beaches at Robert Moses State Park are also closed to additional visitors, as is Field 6 at Jones Beach, according to the New York State Parks website. Hither Hills, Orient Beach and Sunken Meadow state parks are also closed

In a statement, Nassau County Executive Laura Curran said hours were extended for county pools at Wantagh Park and Cantiague Park from 10 a.m. to 7 p.m. Sunday and Monday in anticipation of the heat. The county will also open cooling centers in Uniondale, Wantagh and Hicksville.