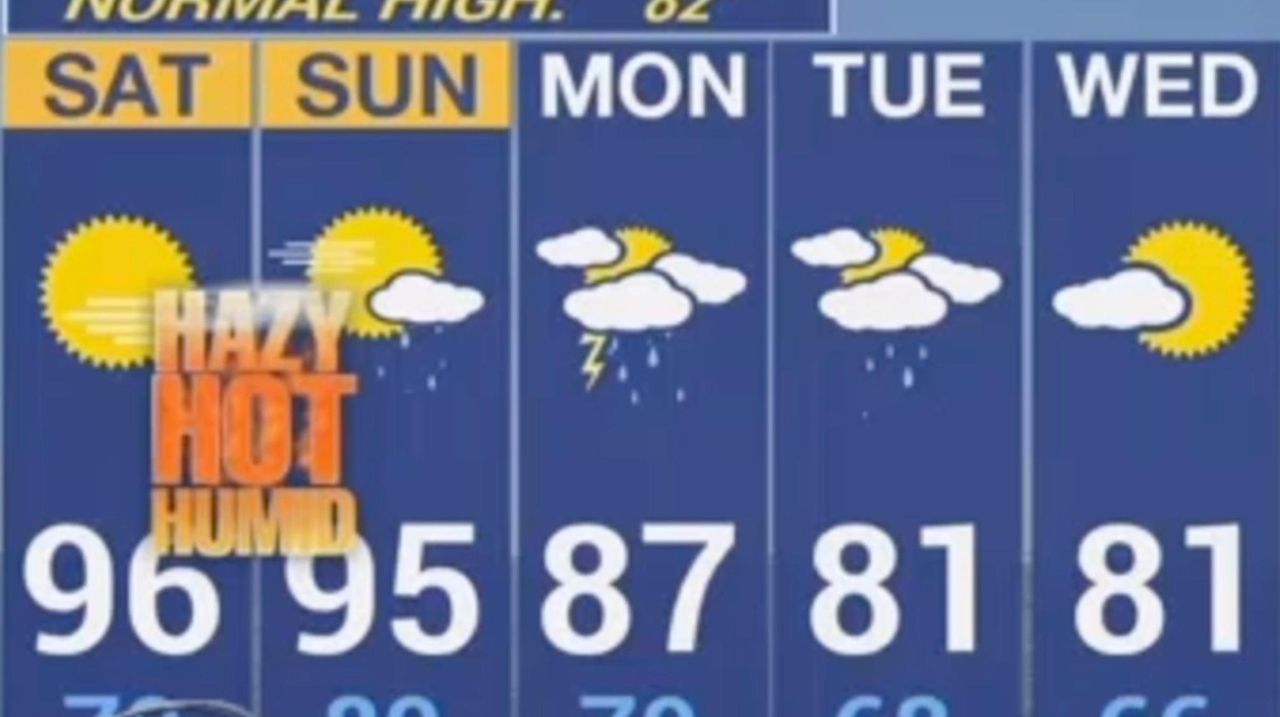 News 12 meteorologist Bruce Avery discusses the excessive heat warning on Long Island, and when the temperatures may cool off next week.

Although Sunday will still be a scorcher, Long Islanders will feel a slight reprieve after the record-tying heat from Saturday, forecasters said.

Highs are expected to top off near 95 degrees with a heat index near 105 degrees Sunday afternoon, according to the National Weather Service. The heat index factors in humidity.

There will be about a 25 percent chance of rain beginning in the afternoon Sunday, forecasters said.

Saturday was officially the hottest day of the year — the hottest in almost three years — with the air temperature at Long Island MacArthur Airport hitting 97 degrees around 1:30 p.m. Factor in the heat index, and temperatures felt like 112 degrees Saturday afternoon.

An excessive heat warning remains in place right through 8 p.m. Sunday. Such warnings are issued for expected heat indexes of 105 or higher.

These conditions are dangerous for anyone who has no means of staying cool, and especially for the very young, the elderly, people with heart/respiratory issues, and those working outdoors, experts say — also for any living thing, two or four-legged, left even briefly in a hot vehicle.

An air quality alert also was issued for 11 a.m. to 11 p.m. Saturday, and continues Sunday during the same time range because of expectations for elevated levels of ozone.

Monday's temperatures on Long Island are expected to dip substantially, with highs in the lower 80s, forecasters said. There may be thunderstorms by Monday afternoon, they said.

'Get home to air conditioning': LIers working in the heatLIers whose jobs are outside have found ways to cope with rising temperatures: using fans, sheltering in the shade and staying hydrated. Heat expected to draw crowds at LI beaches, poolsTowns and villages are opening cooling centers and many municipalities have extended pool and beach hours. Huntington pool hours extended for expected heatIn anticipation of the weekend's heat wave, the Huntington town spray park in Elwood and the Dix Hills Park pool will have extended hours and the town will open cooling centers.