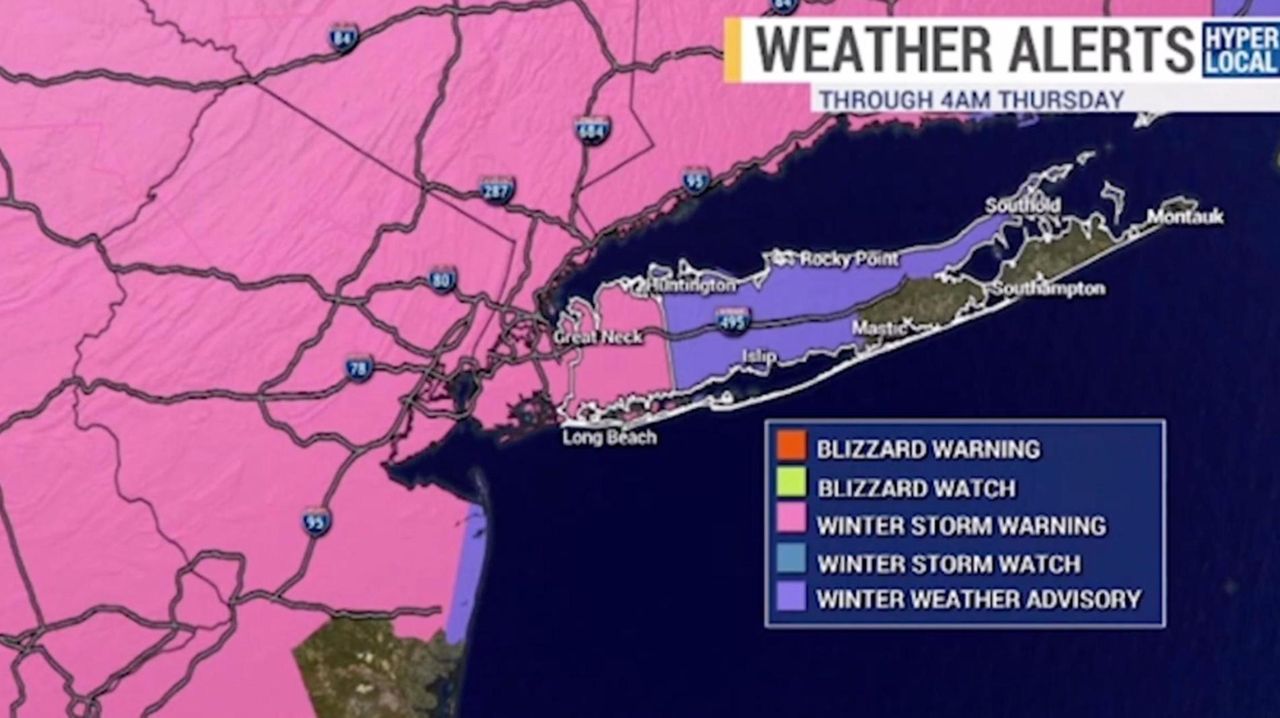 News 12 Long Island meteorologist Bill Korbel said on Wednesday, March 7, 2018, that the heaviest snow is expected to fall between 2 and 8 p.m. A winter storm warning is in effect Wednesday until 4 a.m. Thursday for Nassau County and Suffolk County west of the William Floyd Parkway. A winter weather advisory is in effect for northeastern Suffolk, including the North Fork. Credit: News 12 Long Island

The second nor’easter to hit Long Island in less than a week dropped anywhere from a few inches out east to almost a foot of snow in northwestern Nassau County — snarling rush hour in near-blizzard conditions, causing train delays and knocking out power for many residents.

Long Island commuters saw the roads transform from wet pavement to slush between the morning and evening drives, as rain became sleet and sleet gave way to snow by the globs, particularly along north and central sections of Nassau and Suffolk counties.

The snow came from “an area of low pressure off the New Jersey coast” and tracked northeast, said James Connolly, a meteorologist with the National Weather Service in Upton.

The heaviest snowfall was perfectly timed to make the drive home challenging, around 5:45 p.m.

As conditions worsened, many dwelled in the dark.

PSEG Long Island reported more than 44,000 customers without power as of 10:30 p.m. Wednesday, the result of fallen tree limbs and downed wires.

The nor’easter brought its assortment of disruptions.

“Customers are advised, if possible, to delay traveling at this time,” said a 5:56 p.m. LIRR tweet. “LIRR personnel are responding system-wide to the effects of today’s storm and working to restore service as soon as possible.”

Right in the middle of that commute, the westbound Long Island Expressway was temporarily shut at Exit 51 due to jackknifed tractor trailer, Suffolk police said, but it had been cleared before 6 p.m. Nassau’s NICE buses had suspended service north of Roslyn by late afternoon.

Officials in both counties, and in the corresponding towns, warned commuters about conditions.

“We’ll be working tonight and our crews will be out plowing during the overnight hours so we can have a good commute in the morning,” said Suffolk County Executive Steve Bellone.

“If you need to travel, we urge you to use extreme caution,” Nassau County Executive Laura Curran said.

Total accumulation was predicted to range from less than 1 inch around the eastern forks to 10 inches in parts of Nassau’s North Shore, according to the National Weather Service’s 5 p.m. bulletin.

New York City’s snowfall amounts were to reach from 6 to 10 inches, with upstate areas exceeding a foot of snow.

Starting around 3:33 p.m., the weather station at Hofstra University’s soccer stadium recorded several lightning strikes within a 25-mile radius of the Hempstead campus.

They were likely corresponding with other reports of lightning, mostly from the South Shore and just offshore, as “intense snow bands start rotating on shore,” said Jase Bernhardt, assistant professor in the school’s department of geology, environment, and sustainability.

A winter storm warning is in effect until 4 a.m. Thursday for Nassau County and Suffolk County west of the William Floyd Parkway. A winter weather advisory is in effect for northeastern Suffolk, including the North Fork.

Suffolk police said there had been 210 crashes Wednesday from 8 a.m. to 9 p.m.. Nassau police reported about 54 vehicle accidents from 1 to 6 p.m.

A driver whose car left the Wantagh State Parkway and ended up at least partly in the water, was taken to the hospital with minor injuries, state police said.

On the water, the Fire Island Ferries company said it had suspended service “until further notice.” The Bridgeport & Port Jefferson ferry service canceled two of its runs.

Hempstead Town Supervisor Laura Gillen said she expected any coastal flooding along the South Shore of Nassau County would not be as bad as last week’s.

“We’ve been watching the tidal charts and we don’t think we’re going to be impacted quite the way we were by last week’s nor’easter,” Gillen told News 12 Long Island.

Paul Schulhaus, a Village of Babylon code enforcement officer, closed traffic on Fire Island Avenue at Cedar Avenue, allowing through only residents and those with businesses. Schulhaus flagged each vehicle that headed south through a flooded street, causing a wash into driveways, garages and basements.

That reflected the advice given to all commuters.

See snow totals in your areaHere are the latest available snow depth measurements for the tri-state area provided by the National Weather Service, Upton office. LIers brave a wild nor’easter. Again.Two wild storms within a week. That's twice having to find someone to watch the ... See LI school closings, delayed startsExplore our listings of delays and closures to see what places of learning or programs are affected. Local forecast