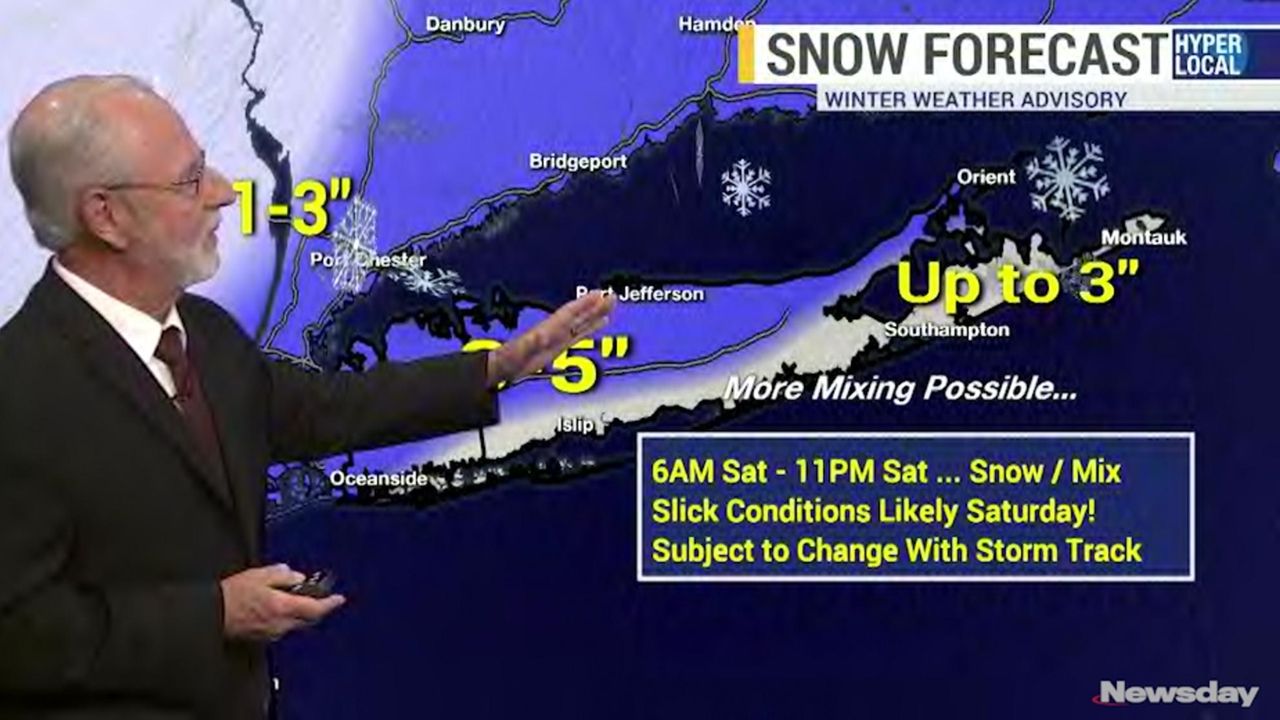 News 12 Long Island meteorologist Bill Korbel had a look at the weather forecast on Friday night, Dec. 8, 2017. The National Weather Service has issued a winter storm watch for Long Island. Snow is expected to be heavy and wet, with about 3-5 inches falling across the majority of the island. Snow is likely to begin about 6 a.m. Saturday and go until 11 p.m. that night. Credit: News 12 Long Island

A winter storm warning has been issued for most of Suffolk County, as Long Island on Saturday faces its first accumulating snowfall of the season.

The forecast for central and northeastern Suffolk was for 5 to 7 inches of snow, with the southeastern section looking at a wide range — around 6 inches nearer to Moriches, and more like 2 closer to Montauk, where there’ll be more of an influence from the warmer ocean waters, said Patrick Maloit, National Weather Service meteorologist based in Upton.

The warning, in effect from 4 a.m. Saturday to 6 a.m. Sunday, advised drivers to expect “significant reductions in visibility at times” with accumulation on pavement “more likely in the afternoon and evening.” Areas under the warning are expected to see some moderate to heavy snowfall through the day.

Nassau County, expected to see 3 to 5 inches, was under a winter weather advisory from 4 a.m. Saturday to 4 a.m. Sunday, telling of visibility issues and more likely accumulation for the afternoon and evening hours.

Southeastern Suffolk, too, was under an advisory from 4 a.m. Saturday to 6 a.m. Sunday, describing snow, “possibly mixing with rain and sleet in the afternoon and evening.” Drivers should “plan on slippery road conditions” and “reduced visibilities at times.”

Snow should start winding down toward early evening, with some lighter snow persisting for later in the evening, said Jay Engle, weather service meteorologist in Upton. “This is mainly a daytime event,” he said.

Care should be taken on untreated roads Saturday night, which will become icy as temperatures fall below 32 degrees, the weather service said.

On Friday, snow, ice and rain in the South spurred warnings for motorist to use extreme caution while driving. Other cities saw record-setting snowfall or the first snow in years.

In New Orleans, where snowfall is a rarity, a wintry mix of flurries, freezing rain and ice made driving treacherous.

In Columbia, Mississippi, more than 6 inches of snow had fallen by Friday night, a one-day record for the city. About 5 inches of snow fell Friday in Birmingham, Alabama while in Atlanta, a slushy mix of rain and wet snow forced several downtown businesses to close early. Nearly 800 flights were canceled Friday at Atlanta’s Hartsfield-Jackson International Airport, authorities said.

Based on the late Friday afternoon forecast, Long Island snowfall amounts could still change if the track shifts.

For the most part, flakes were expected to start falling in the 5 to 7 a.m. range Saturday, said Tim Morrin, weather service meteorologist based in Upton, with snow continuing into Saturday night.

There were no heavy bands in the picture, he said, so snowfall should be steady and light, possibly approaching moderate for some areas.

Temperatures during the day Saturday are expected to reach a high of about 34 degrees.

PSEG Long Island spokeswoman Elizabeth Flagler said the utility has scheduled additional work crews to be available “across the island to respond safely and as quickly as possible to any outages that may occur.”

In addition, she said, “We encourage customers to drive safely. Slippery roads can cause motor vehicle accidents which may cause outages, too.”

The Town of Hempstead was “preparing for the first major snowstorm of the season,” Councilman Anthony D’Esposito said Friday morning. “Our crews are installing plow blades on trucks, and workers are filling up spray trucks with the town’s new ice-melting brine solution to spread on roadways. Additionally, all staff is on alert, and staff is monitoring weather forecasts.”

To help facilitate the town’s snowplowing, residents are asked to move their vehicles from roads once snow starts and to refrain from shoveling or blowing snow from their property into the road.

With the storm expected to “be particularly challenging for holiday shoppers heading out on the roads” in the morning, he encouraged residents to plan ahead and limit driving once the flakes start falling.

Town of Oyster Bay highway workers were set to start pre-treating roadways at 11 p.m. Friday, using sand and salt, and “our snow-fighting crew is at the ready to plow and salt roadways,” said Joseph Saladino, town supervisor.

Stocked with 9,000 tons of road salt and sand, the town also has at the ready a fleet of 300 plow and salt trucks, pickups with plows and sanders, payloaders and other equipment. With an eye to efficient snow clearing, supervisors can use GPS to monitor the vehicles to determine locations and when plows might be down, the town said in a release.

Sunday is expected to bring mostly sunny skies with temperatures rising to the upper 30s.

With Mark Harrington and William Murphy

Local forecast What to keep in your emergency kitUse these recommendations to put together an emergency survival kit for yourself and your family. How to survive a snowstorm at homeInclement weather drives many to stay indoors. But even in the comfort of your own ... 8 tips to avoid hurting yourself while shoveling The cold and snow are not just an inevitable inconvenience of winter, but pose the ...