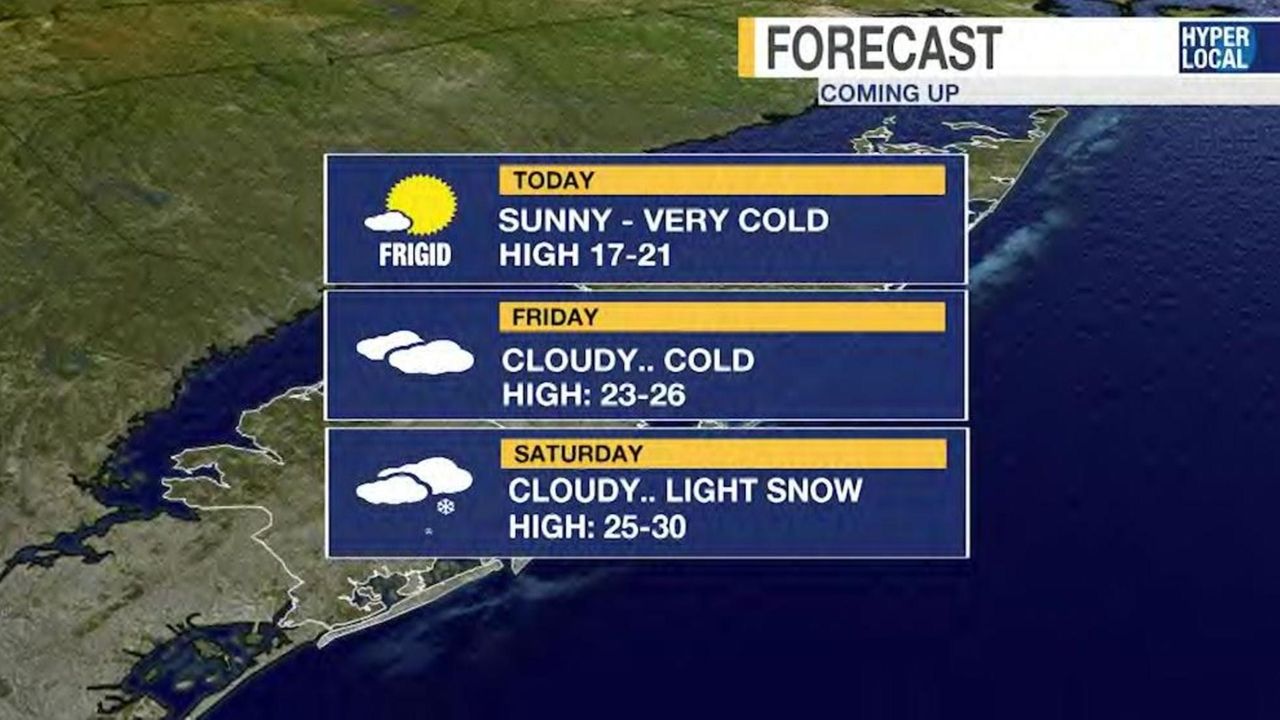 Forecasters say an arctic blast with the potential to set a record will bear down on Long Island on Thursday, Dec. 28, 2017, and they are trying to assess whether a snowstorm could hit this weekend too. Credit: News 12 Long Island

The cold spell continues, with temperatures expected to remain below freezing at least through next Wednesday and possibly longer, forecasters say.

Friday was looking to dip down to the single digits just before sunrise for most of Long Island, rising only to the low 20s during daylight hours, but feeling considerably colder due to wind chill, said Joe Pollina, National Weather Service meteorologist in Upton.

Such frigid conditions can be particularly dangerous for the elderly, homeless people and the very young.

Warming centers have been made available in both Suffolk and Nassau counties to help people who may need assistance in escaping the dangerously cold weather.

Dr. Paul Pipia, chief medical officer of Nassau University Medical Center in East Meadow, said he expects to see an uptick in hospital visits as the Arctic temperatures continue through the holiday weekend.

“The people we are most concerned about are the elderly because they are most susceptible to hypothermia, but also some of the younger people who think they are invincible and will also get themselves into trouble,” Pipia said.

Friday also brings a chance of snow flurries, the weather service said, with snow likely for Saturday. One to 3 inches is forecast for most of the Island, with up to 4 inches on the North Fork, Pollina said. Highs on Saturday are expected to reach the upper 20s.

Highs Sunday, the final day of 2017, will be in the low 20s, with New Year’s Eve revelers facing single-digit temperatures in the overnight hours, according to Pollina. The first day of the New Year sees similar conditions, perhaps a bit colder.

Tips for coping with the bitter cold tempsWith bitter cold temperatures gripping Long Island, health professionals are advising residents how to cope ... Local forecast Warming shelters open in Nassau and SuffolkLong Island officials are arranging to help those struggling to stay warm as emergency shelter ... 12 habits your doctor hopes you broke this winterWinter is almost over and it brought plenty of dangers, hazards and bad habits. But ...