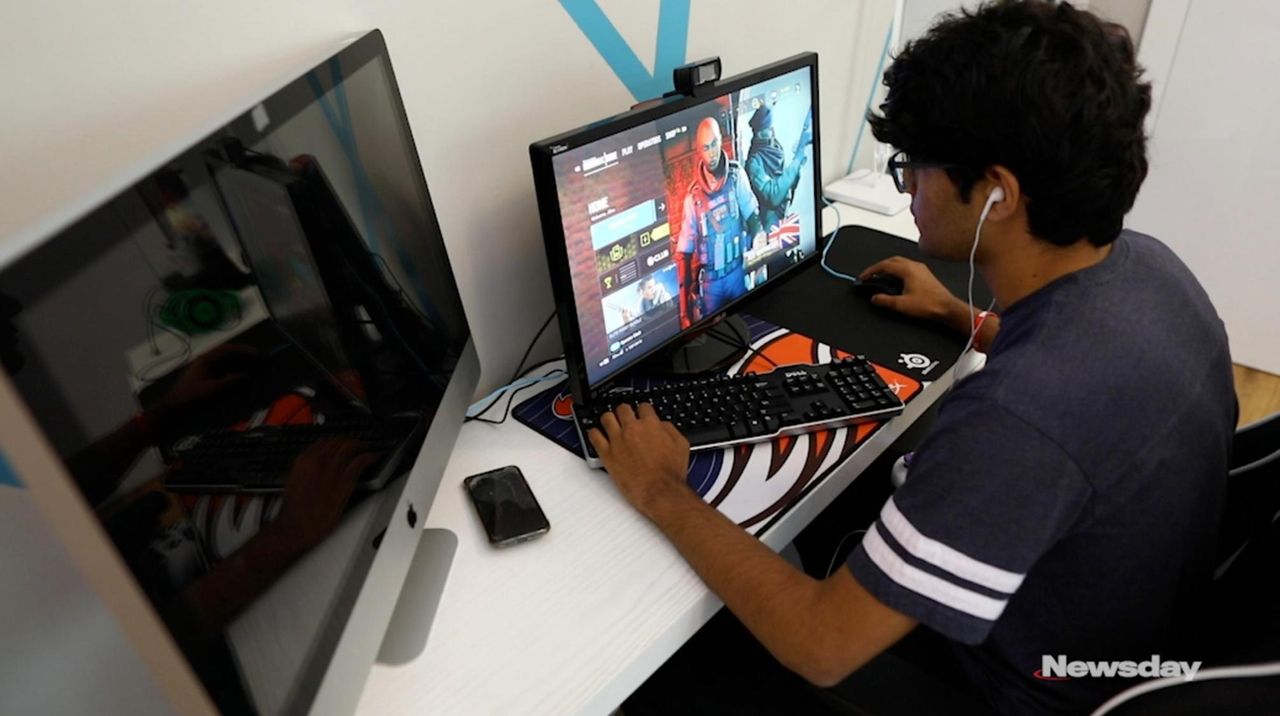 Newsday got an inside peek into the life of Arjun Sharma, who manages a professional esports team and who is now home schooled in an effort to focus on a gaming career that takes him all across the world.  Credit: Newsday / Chris Ware

Arjun Sharma, a 17-year-old from Locust Valley, has turned his passion for video games into a burgeoning career.

A little over a year ago, Sharma became the manager of a professional esports team and has traveled to tournaments in Germany, France and Canada. The travel was so intense that Sharma’s parents allowed him to be home-schooled after his freshman year at Friends Academy.

Esports is the term for professional video gaming, organized just like traditional professional sports leagues. Teams compete for championships, some of which offer multimillion-dollar prizes. Fans can watch the games online, or even fill arenas built specifically for esports. Sharma's team plays "Rainbow Six: Siege," a first-person tactical shooting game based on a series of books by Tom Clancy.

Sharma manages a team named Rogue that plays in the Rainbow Six: Siege Pro League. He cannot even think about manning the playing controls, however, until he turns 18, the league minimum, in April.

It’s all been a dream come true for Sharma, who hopes to study computer science or business at an Ivy League university while continuing to pursue opportunities in the cybergaming world.

The decision to home-school Sharma was made after careful consideration, his mother, Priya Sharma said.

“We thought, at least, let’s give it a try,” she said. “We’re big believers in — if you really want to be successful, you have to do something different. We believe in our children.”

Sharma got his big break in August 2017. An avid follower of professional video gaming, Arjun noticed that his favorite team, Vertical Gaming, had split with its management after a disagreement. The team had no owner, no official name and a big-money tournament in Germany just a few weeks away.

“I talked to my dad about them and said, you know, they really need an organization. Is there anything I can do?” Sharma said.

His father, Atul Sharma, an entrepreneur, suggested his son reach out to a number of organizations via Twitter, and it wasn’t long before Rogue, a multiple esports-based business, expressed interest in buying and taking over Vertical Gaming.

Soon, Sharma was on a Skype call with Rogue CEO and co-founder Frank Villarreal,  and the next day he was on a plane to Germany as the new team’s manager.

“[Villarreal] essentially told me that now that I was the one that got them the team, I could choose what I wanted to do — if I wanted to be involved in the team or not. And I said, what’s the most I can do?” Sharma said.

Villarreal said he was impressed with Sharma right from the start.

“He’s shown tremendous care and concern for the players,” Villarreal said via email, “and always has an understanding of their mentalities and how to manage them to get the best performance . . . We wouldn’t have the success we have in Rainbow Six Siege without him.”

Members of the Rogue team can earn thousands per month in winnings and salary. Sharma said he takes home a few hundred a month as a salary for the work he does, which is crucial to the players.

“I make sure that they’re just solely focused on the tournament,” he said.

“Any pressing stuff, I’ll make sure it’s covered. I’m on social media a lot making sure that all the users and all the fans are actively engaged so nobody misses a match.”

Additionally, Sharma landed an internship with Rogue’s parent company, ReKTGlobal Inc., an esports company with offices in New York City and Charlotte, North Carolina. As part of his work there, he is helping to dole out $450,000 in scholarships to high school students with a strong interest in esports.

Sharma doesn’t know exactly where this will all take him, but his future appears bright, said Dave Bialek, ReKTGlobal co-founder and CEO.

“You’ll see much more of Arjun Sharma in years to come,” Bialek said. “Arjun has a vision and he makes it become a reality.”