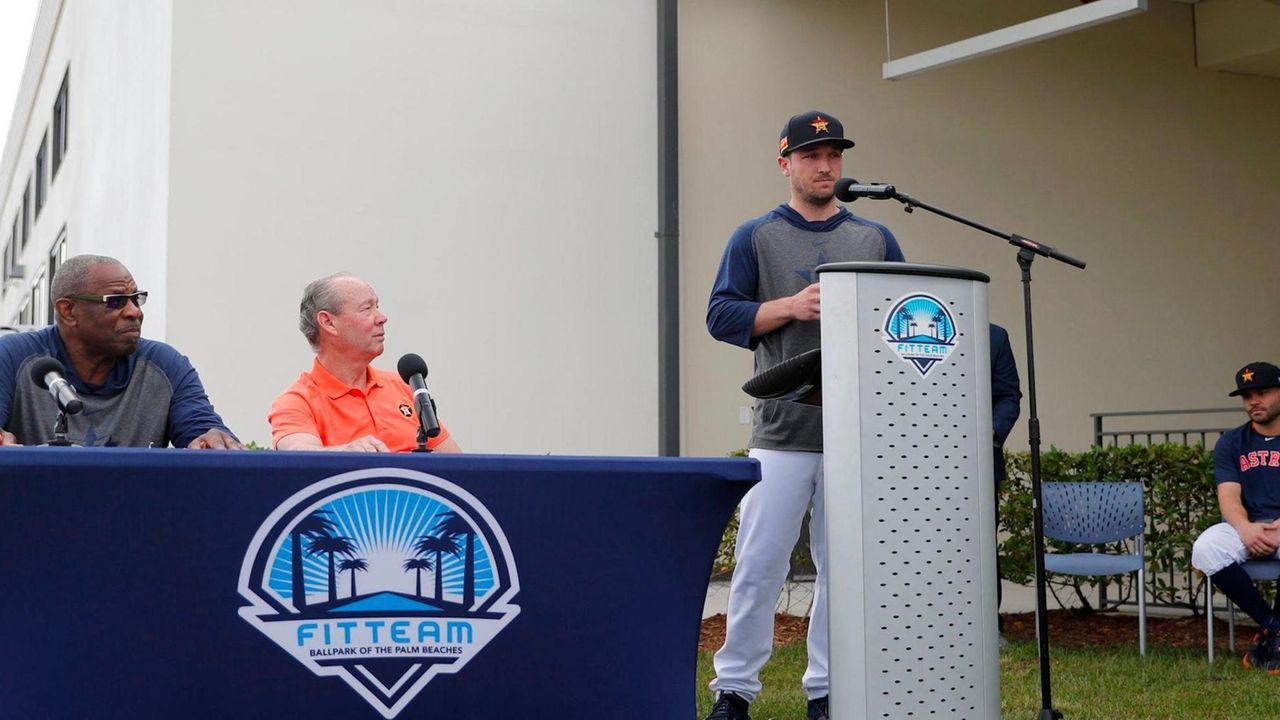 Astros owner Jim Crane and players Jose Altuve and Alex Bregman apologized for their roles in the club's sign-stealing scandal at a news conference on Thursday, Feb. 13, 2020. Newsday baseball columnist David Lennon discussed what they had to say from the Astros' spring training complex in West Palm Beach, Flordia. Credit: Newsday / Dave Lennon

WEST PALM BEACH, Fla. — The Astros needed those trash cans Thursday at their spring training complex. Not for banging this time, but to dispose of the crumpled-up scripts that contained their well-practiced apologies, from team owner Jim Crane to the handful of players who spoke in the clubhouse.

The much-anticipated affair came off as a stiffly choreographed event put on for the roughly 100 media members in attendance. The part that was broadcast live from a sunny patch of grass just outside the Astros’ clubhouse door probably was the worst of it, as Crane kicked off Mea Culpa Morning in awkward fashion.

“These are a great group of guys who did not receive proper guidance from their leaders,” Crane said. “We cannot change the actions of the past, but we are fully committed to moving forward in the right way.”

For the record, Crane did say he was sorry for the illegal sign-stealing scandal that ultimately contributed to the 2017 World Series title, the first and only for the Astros. But while Crane escaped punishment, he made general manager Jeff Luhnow and manager AJ Hinch pay with their jobs within hours after they were suspended by MLB for their roles in the scandal.

Incredibly, neither Crane nor many of the Astros would admit Thursday that the sign-stealing tactics helped the team’s performance. The lone exception was shortstop Carlos Correa, who stood out as the most sincere member of the organization.

After Crane said, “Our opinion is that this didn’t impact the game,” he denied using those exact words a minute later before saying it was “hard to determine.”

Across the state in Tampa, Yankees manager Aaron Boone disagreed.

“That’s quite a stretch, I think,” he said. “On what level did it impact things, I guess we’ll never know. But I think clearly when we’re talking about some of the things that went on, those things have an effect on games. Clearly.”

The Astros mostly stuck to expressing remorse, over and over, yet would have people believe that swiping signs through illegal, electronic methods — then banging a trash can as a signal — wasn’t a big factor in winning the 2017 World Series over the Dodgers.

The Astros as a whole stuck to that story, which likely was hatched from Wednesday night’s team meeting to game plan for Thursday, but Correa chose to veer off script.

“It’s definitely an advantage, I’m not going to lie to you,” Correa said. “Knowing what was coming, I think you get a slight edge. And that’s why people got suspended and people got fired because this is not right. It’s not right to do it.”

After hitting a walk-off homer off Yankees closer Aroldis Chapman that sent the Astros to the World Series last October, Jose Altuve refused to allow teammates to rip off his jersey as he approached the plate, but he denied wearing a buzzer under his jersey that alerted him to pitches.

Chapman said Thursday morning that he was suspicious of Altuve, who repeatedly shot down the accusations at his locker.

“I didn’t do the buzzer thing,” Altuve said. “Nobody on this team wore a buzzer. What else can I say about that?”

What about the jersey? And the subsequent change of shirts?

The Astros used the trash-can system to varying degrees, with some players relying on it more than others. The evidence points to a very noticeable advantage, as Correa made sure to emphasize. But the Astros came off as inconsistent with their apologies. How do you say you’re sorry for those illicit gains yet still maintain the team’s success wasn’t fraudulent?

“That’s up for somebody else’s interpretation,” George Springer said. “But I believe in our performances as players.”

It’s probably safe to assume that few outside the Astros’ clubhouse feel that way these days. The team knew this day was coming for months, as far back as early November when the news first broke. But no one could have imagined the scope of the scandal, which resulted in the firings of four people on three different clubs — Luhnow, Hinch, Alex Cora (Red Sox) and Carlos Beltran (Mets).

The Astros get to hold on to their 2017 World Series rings, however. And if they’re ashamed of that hardware, none of them copped to the guilt during Thursday’s event.

“I’m gonna keep saying it because it’s the only thing to say — everyone can draw their own opinions at the end of the day and draw their own conclusion,” pitcher Lance McCullers Jr. said. “I can stand here and firmly believe that we earned that championship. That’s just my belief and I’m just one person. But I believe that championship was earned 100% and hopefully we earn another one.”

That defiance hung in the steamy air Thursday morning. For as much as the Astros were supposed to convince us that this was a mass apology, it was more about them just trying not to talk about it anymore. It’s hard to truly feel sorry about winning, and Crane himself refused to use the word “cheating” to describe what they had done.

Even the new GM, James Click, who left the Rays, has yet to fully clean up the front office. Some of the current employees reportedly have links to the scandal. Click deflected numerous questions about their futures, and the Astros really didn’t sound very sorry.

“I don’t think I should be held accountable,” Crane said. “I’m here to correct it. And I’m here to take this team forward with Dusty [Baker] and James [Click]. It won’t happen again on my watch.”

With Erik Boland in Tampa

Giants know they'll go as Daniel Jones goes in make-or-break year
How Giants' Joe Judge will tackle the vaccination issue
The Saquon Barkley Week 1 watch is on
As deadline approaches, Scott wants depth for Mets' rotation
Hope is high that new coach Saleh can reverse Jets' fortunes
Rojas: DeGrom 'felt good' after first time on mound since being shut down
Didn’t find what you were looking for?