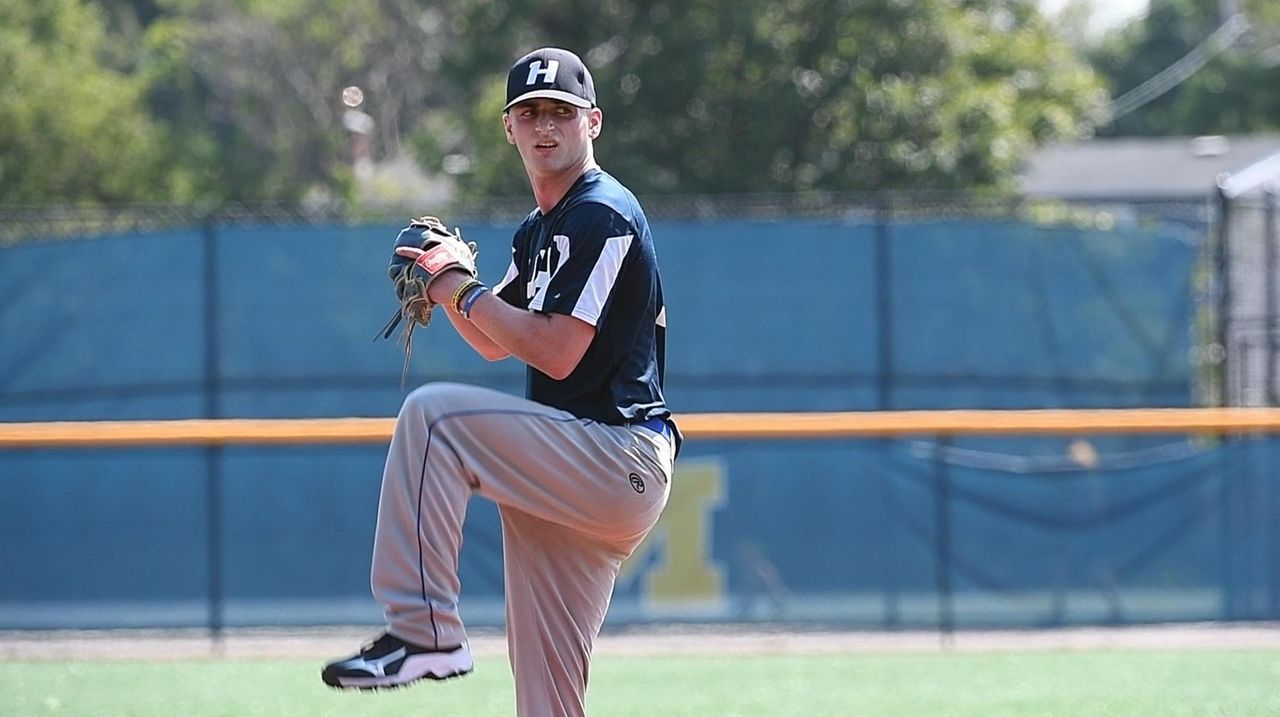 Mark Faello is always moving, always active and always trying to get better. He’s also a fighter and a battler, for sure.

All of Faello’s attributes were on full display as he paced in the shade behind the HDMH-Baseball Navy’s dugout while his HDMH-Baseball Navy team hit against league rival Grey in a key Blue Chip Collegiate Baseball League (BCCBL) game last week.

The 6-foot, 170-pound righthander tried to relax and gather himself as he sipped from his orange Powerade. Then he snuck a peek at his teammates as they took their turns at bat.

It’s a routine Faello followed on a gorgeous, sun-drenched August morning at Massapequa High School. He was one part curious observer, another part caged animal, anxiously awaiting the end of the game.

The fact that Faello was pitching on this day is what makes his story somewhat amazing — he is 13 months removed from being diagnosed with Hodgkin’s lymphoma.

“I feel really good,” said Faello, 19, as he watched from behind the dugout as his team took him off the hook from a loss, scoring four runs in the seventh inning in a 5-2 victory. Faello did his part, allowing the Grey team two hits with 12 strikeouts and no walks in six innings as Navy improved its record to 17-1.

“I’m hoping that I continue to keep having good starts,” Faello said. “A loss is like nothing compared to what I’ve been through.”

It was April 21, 2019 — Easter Sunday — when Hofstra teammate Jack Jett noticed something peculiar about Faello’s neck after Faello, then a freshman, had pitched in a game against UNC Wilmington.

“It looks like you have two necks,” Faello recalled Jett saying.

When Faello looked in a mirror, he saw that the right side of his neck was swollen.

He estimates he saw more than a dozen doctors and specialists over the next few months and was given various antibiotics, but not much changed.

“It was frustrating, it definitely was,” Faello said. “I just wanted an answer after months of not knowing.”

Faello said he even had a needle biopsy (which one of his doctors said was 98% percentaccurate) that came up negative for cancer. The swelling in his neck didn’t subside, so Faello’s father, Mark Sr., pushed him to see other doctors.

Finally, after a tissue biopsy in July 2019, Faello was told thatlearned he had Hodgkin’s lymphoma (a cancer of the lymphatic system, which is part of the immune system, according to mayoclinic.org).

“It was devastating,” said Faello’s mother, Laurie. “You never think you’re going to hear that your son has cancer.”

Faello started chemotherapy treatments later that month and had sessions every other Thursday, 12 cycles in all, ending in mid-December.

“It was really hard,” said Faello’s 12-year-old brother, Connor. “It hurts when your brother is going through chemotherapy and you have to watch him ... I hated seeing my brother hurt.”

Incredibly, Faello pitched last summer — while undergoing treatment — for the Bristol (Connecticut) Blues of the Futures Collegiate Baseball League. (FCBL).The former Diamond Award winner for Plainview-Old Bethpage JFK High School went 6-0 with a 1.53 ERA, and had 29 strikeouts in 41 innings. He led the FCBL in wins and ERA and played in the 2019 FCBL All-Star game.

“Mark had a good year, he really did, and he just kept going,” Mark Sr. said. “He just wouldn’t give up. It was great to see him pitching, but it really kind of woke us up to what life is all about, and your children being healthy is the number one most important thing. It was tough, and it’s still tough.”

Faello — who said he lost 17 pounds during his ordeal — described the three-hour long chemo sessions as “very painful,” with side effects of hair loss, constipation, irritability and nausea.

But he never complained.

“For five days I’d feel like [crap], and I’d feel tired,” said Faello, who’s had six clean positron emission tomography (PET) scans since starting treatment. “It was rough but I battled through it. I still worked out, and I still got my pitching work in.”

After not playing taking off baseball in the fall, Faello refused to take a redshirt season. He made four appearances for Hofstra, including one start, with an 0-1 record and a 12.00 ERA before COVID-19 forced the cancellation of canceled the Pride’s season after 14 games this spring.

“It was frustrating, but it also helped in a way,” Faello said. “I definitely wasn’t ready my sophomore year. I rushed my recovery back, but I’m not the type of guy who’s going to sit around while I watch my team play. I’m not that type of person.”

Hofstra baseball coach John Russo has known Faello for more than 10 years. He gave Faello hitting lessons as a youngster.

“I had never dealt with something like this before,” Russo said. “But he was as brave and as tough as any kid I’ve ever coached, and I couldn’t be more proud of him.”

“Nothing about him surprises me,” first baseman and close friend Anthony Fontana said. “Year after year he gets better and better . . . and to see how much adversity he’s gone through, and still, he’s become a better player and person, it’s just unbelievable how he did it.”

Faello, who throws a two-seam and four-seam fastball, a curveball and a changeup, leads the BCCBL this summer in wins and strikeouts. He’s 5-0 with 45 strikeouts and four walks in 23 innings with a 0.39 ERA and 0.57 WHIP. before Saturday’s games

The finance major, who still has three years of college baseball eligibility remaining, has dreams beyond Hofstra.

“Every Division I player’s dream is to get drafted, and that’s my goal,” said Faello, who will turn 20 on Nov. 20. “I don’t know if that’s going to happen next year or the year after, but I truly believe that it’ll happen. I’m just going to keep striving and keep working hard, and not let anything get in my way.”

Ever the battler. Ever the fighter.

Nash: 'Unfortunate play' will sideline Durant for 'weeks'
Isles not overwhelmed about the road ahead
LI's Joe Smith Jr. defends his title against Steve Geffrard
Time for Baseball Hall of Fame ballots to be made public
Alexander, St. John's bounce back with big win over Hoyas
Isles' schedule filled with teams they've been losing to
Didn’t find what you were looking for?