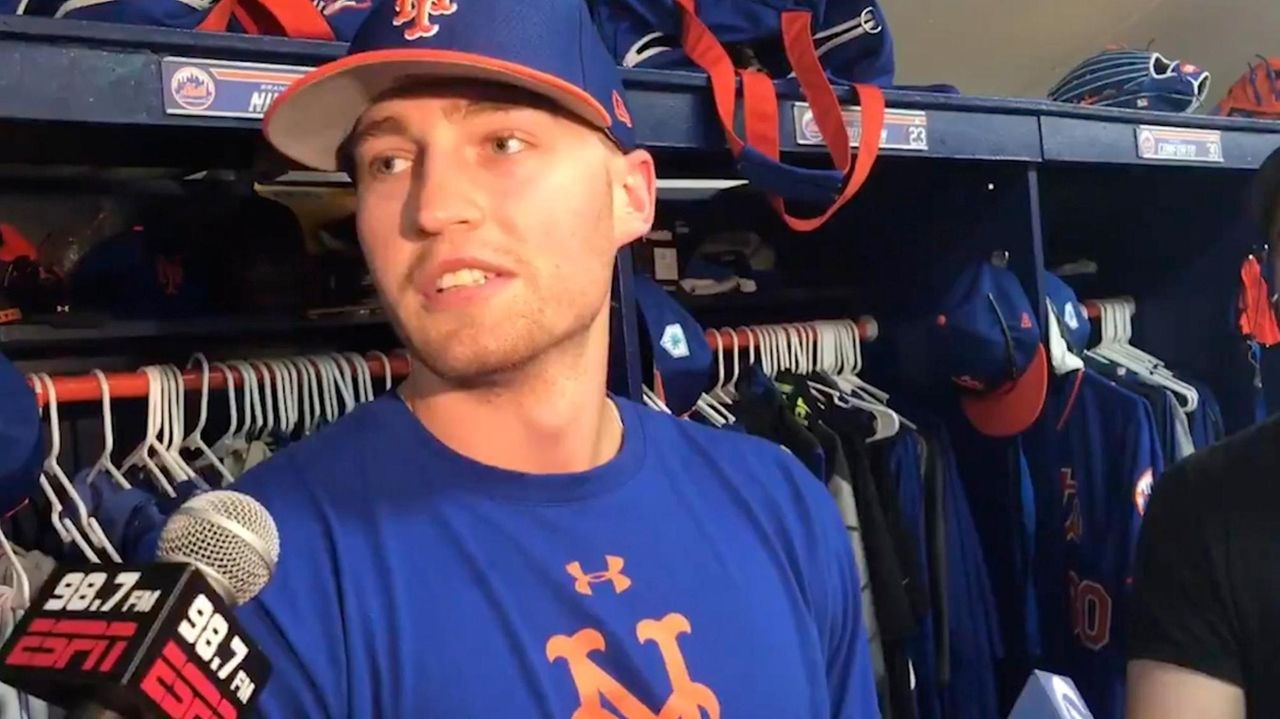 Brandon Nimmo missed a day of Mets training camp with food poisoning. On Feb. 28, 2019, he detailed his foray into cooking that led to the illness. Credit: Newsday / Tim Healey

Upon his return to Mets camp on Thursday after missing the previous day, Nimmo detailed his food-poisoning experience, which manager Mickey Callaway had blamed on undercooked chicken cooked by the outfielder himself.

Not sure of the source, Nimmo proclaimed innocence.

“I cooked it all the way through. It was white,” Nimmo insisted, his smile back in full force. “I didn’t have a meat thermometer, so maybe I ought to invest in one of those, a digital meat thermometer, and make sure this doesn’t happen again.

Here’s the play-by-play of how Nimmo ended up losing four pounds in about a day.

Tuesday night, Nimmo decided to cook himself dinner. The recipe: chicken and a sweet potato, with “like a garlic herb thing over the top,” Nimmo said.

“I cooked it in olive oil and aluminum foil, 400 degrees for 25 minutes,” Nimmo said. “Apparently that wasn’t good enough.”

He was so proud, he decided to show off his hard work.

“I’m not going to lie: I took a picture of it and sent it to my wife,” Nimmo said. “It looked good and it tasted good. I kind of just threw this one together and I was like, this one was pretty good. I took a picture and she can confirm that. It did not end up well.”

He slept most of Wednesday, later testing his stomach with chicken noodle soup.

Yes, right back to chicken.

Rice and bread also are on the docket.

“Try and keep things bland here for a while,” Nimmo said. “Might have to think about someone else cooking for me now.”

Nimmo was back in the Mets’ facility Thursday morning, surprised to see his oopsie made it onto MLB Network, as shown on the TVs inside the clubhouse.

“I was like, how did this get on ‘Hot Stove’?” Nimmo said. “I’m interested to see what they had to say about it.”

Nimmo said he could be back in the lineup as soon as Saturday after getting a full day of baseball activity under his belt. He hasn’t made his defensive debut yet — a sore right shoulder has slowed his build-up in camp — but hopes the weirdness surrounding him so far in spring training is over.

That way he can get back to being his regular cheery self.

Notes & quotes: T.J. Rivera said recent right elbow discomfort is “definitely not the same pain” he had during a setback from Tommy John surgery recovery last summer On Thursday, he refrained from throwing during defensive drills and wore a brace he said is meant to reduce the stress on his elbow . . . After allowing a homer to Matt Carpenter, Jason Vargas retired six of the next seven batters, three via strikeouts, in his spring training debut against the Cardinals . . . Pete Alonso’s two-out, two-run, opposite-field single caught Callaway’s eye. “If he’s going to have the ability to do that,” Callaway said, “he’s going to drive in a lot of runs.”