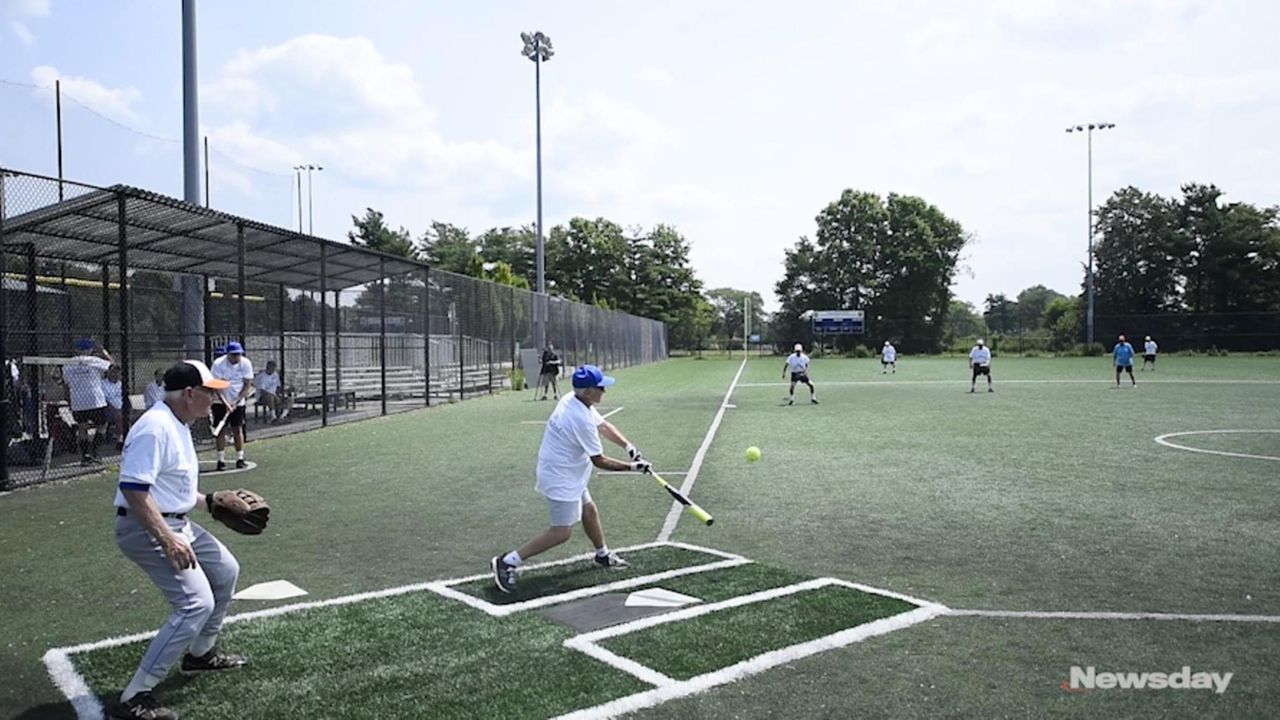 On Wednesday, Bob Gebel of Port Washington, explained how being a part of the The Bristal All-Stars, a Long Island senior citizen softball team, reminds him of his days playing Little League.  Credit: Johnny Milano

These guys were swinging for the fences, hustling around the bases and carrying on like a bunch of kids. And virtually all were more than 80 years old.

The Bristal All-Stars, a group of Long Island's elder softball players, gathered Wednesday on a Hicksville baseball field to celebrate the 50th anniversary of the 1969 Mets World Series championship.

The 34 men, who play weekly in the New York Senior Softball Association, recalled that miraculous New York team as they showed some pretty amazing skills themselves.

Each year, following Major League Baseball's All-Star Game, these men play a game to honor a certain theme. This year, they celebrated the team that shook off expectations to win it all. In the process, they shook off some expectations about people their age.

Rosen recalled he had seats to every Mets home game during that championship series against the Baltimore Orioles. He was in the right field stands when Mets rightfielder Ron Swoboda made that famous diving backhanded grab off a shot to right in Game 4.

Today, the retiree has seven great-grandchildren.

"It was a magical time," said Rosen, wearing his first baseman's glove. "You have to remember that the Jets beat the Colts in January, the Knicks won, the Mets won, and, most importantly, we landed on the moon."

The men, who are pretty close in age to those Met legends, also recognized the challenges that those players — and themselves — face as they confront the realities of aging. They noted that players Tom Seaver and Bud Harrelson are battling dementia, and that Ed Kranepool received a lifesaving kidney transplant.

Wearing Bermuda shorts, sneakers and T-shirts, the men played a hard-fought game in the hot sun, half of them wearing Mets hats and the others donning the Orioles ball cap. By the bottom of the first inning, the proxy Orioles were leading 2-0.

Several took the Cantiague Park field in the face of age-related setbacks. Frank Corcoran, 81, of Seaford, played outfield despite undergoing a quadruple bypass years ago.

"It's a nice way to spend my retirement," said the former FDNY deputy chief.

Jack Balsamo, 83, of Queens, had a tracheotomy last year due to cancer.

The teams made a few concessions to age. They played only five innings, permitted five men in the outfield, and allowed for more pinch runners.

Nonetheless, when Fred Elkins, 81, smacked a hard line drive up the middle, pitcher Gus Caroussos, also 81, snatched it out of the air with ease.

"These guys don't give an inch," said Bob Gebel, 84, of Port Washington. He was serving as a team manager, following a knee replacement last year. "They want to win."

In past games, some players have become so overzealous that their wives pulled them off the field, the men said. Some have sick spouses at home and this serves as a bit of emotional support. One year, they divided the teams into "the cardios vs. the orthos," essentially pitting those who had heart surgery against those who had orthopedic surgery.

By the bottom of the fourth inning, the proxy Mets were ahead 6-4. The Orioles had a bit of a run in their last at bat, getting a man on first and second, but the Mets held on for the victory.

Then everybody retired to the nearby coffee shop.