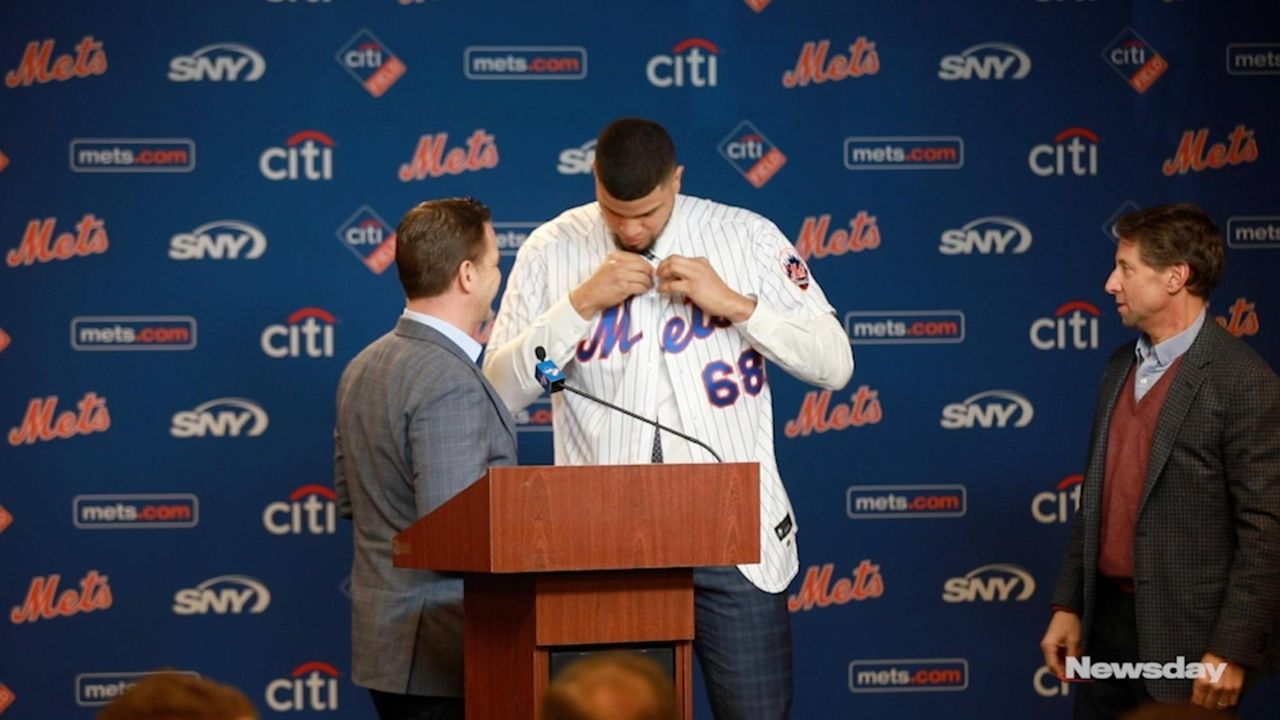 It wasn’t quite “come and get us,” but Mets general manager Brodie Van Wagenen betrayed no lack of confidence Thursday at Citi Field as the team introduced the newest addition to its beleaguered bullpen: Dellin Betances.

“I’ve talked many times this season and in the past that our goal is to increase the floor of our projected window,” Van Wagenen said. “This signing is different. This signing was intended to blow the cover off of our ceiling.”

Those are big words for the Mets, who finished third in the NL East last season and had the fourth-worst bullpen ERA in the National League.

Van Wagenen, however, insists there is a basis for his confidence. Edwin Diaz has tweaked his mechanics and the team’s new pitching coach, Jeremy Hefner, went to Puerto Rico to work with him. Seth Lugo was effective out of the bullpen in 2019, and Van Wagenen thinks Jeurys Familia will bounce back.

And then there’s Betances.

Ever the imposing figure when he was on the Yankees, the 6-8, 265-pound Betances, sporting a new beard, towered over everyone in the room at Thursday’s news conference. He put on his jersey— No. 68, the same number he wore as a Yankee — and said he fully expects to be 100% by spring training and will start throwing off a mound in a week or two.

He faced only two batters last season, the result of a shoulder impingement, a lat injury and the partial tear of his left Achilles, which he suffered while celebrating his second strikeout. He’s ramped up his training regimen, has been under the watchful eye of the Hospital for Special Surgery, and “his health was something we got comfortable with throughout the process,” Van Wagenen said.

Betances’ injuries, though, complicated what otherwise should have been a windfall for him in free agency. He still was highly sought after, Van Wagenen said, but the Mets weren’t too keen on fully committing to a lucrative multiyear contract.

On the other hand, Betances’ pedigree — a successful career with the Yankees in which he became one of the most dominant relievers in the game — would require adequate compensation.

Talks and negotiations started early in the offseason and weren’t resolved until late December.

The result was a one-year contract worth $2.2 million, along with a $5.3 million signing bonus. There also is a 2021 player option worth $6 million and a team buyout option for $3 million. He also has a vesting option for 2022, according to Cot’s Contracts.

There was some hefty courting, too, with new manager Carlos Beltran — Betances’ former teammate on the Yankees — reaching out to the reliever. Second baseman Robinson Cano, a friend and former teammate, did the same.

Beltran “played a big part, definitely” in the decision, said Betances, 31. “I love Carlos Beltran as a friend and can’t wait to play for him . . . I knew as soon as he got the managerial job, he kind of pushed my name toward management and he did a tremendous job in letting them know how much he liked me.”

There also was the allure of staying in New York, where he grew up and where much of his family, which descended en masse for the news conference, resides. Betances also got to fill out his personal New York bingo card: He grew up playing on the Lower East Side in Manhattan, went to school in Brooklyn, played for the Staten Island Yankees and broke into the major leagues in the Bronx.

“And now I stand here, having the chance to wear this Mets uniform and play in Queens,” he said. “New York is in my blood.”

Van Wagenen said Betances was never out of the Mets’ sights but that at various junctures, he was skeptical that a deal would get done. In the end, it took multiple attempts and, at one point, a 72-hour brainstorming session with chief operating officer Jeff Wilpon and David Cohen, executive vice president and general counsel for the team, Van Wagenen said.

“When you have a player coming off a year where he only faced two batters, there’s an element where we have to try to find a way to give him the financial security he’s looking for while also, you know, protecting his downside but also giving him the upside,” Van Wagenen said. “The same goes for us. We wanted to make sure we had some downside protection while also giving everybody the opportunity to be successful.”

The Mets are banking on Dellin Betances being as dominant in Queens as he was in the Bronx. His career numbers: