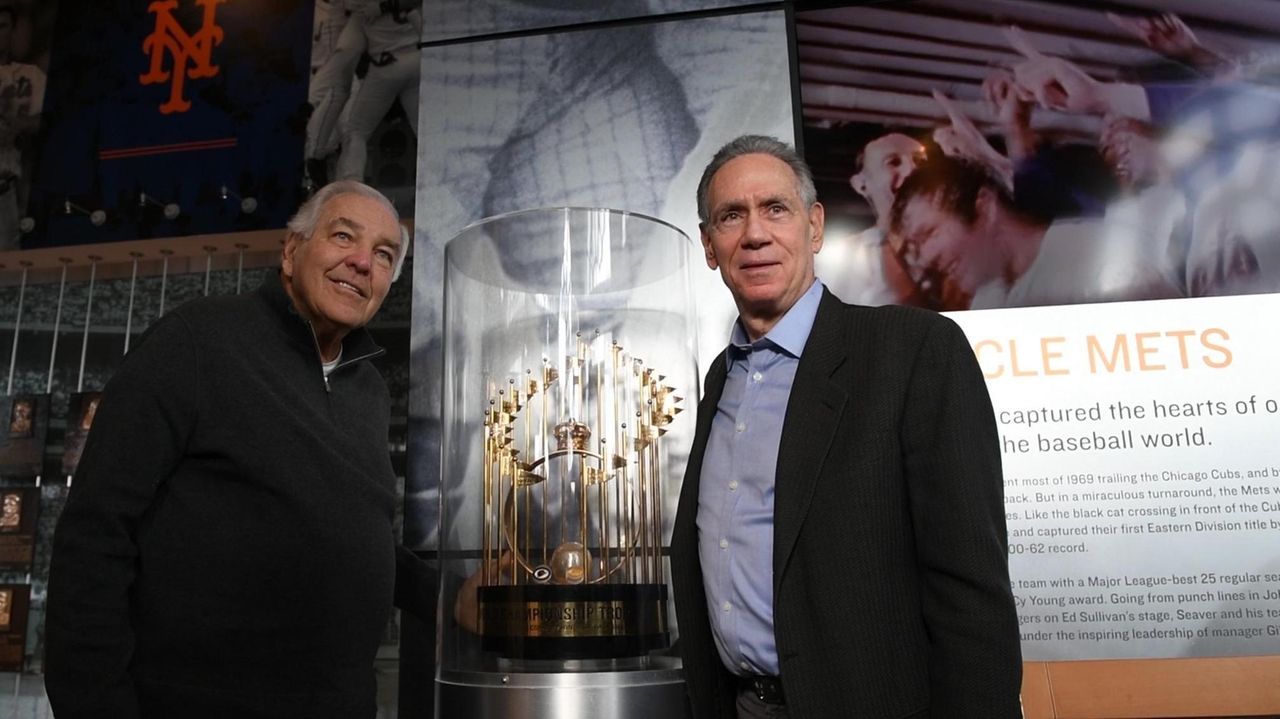 Former Mets Ed Kranepool, left, and Art Shamsky appeared at Citi Field on Wednesday to talk about being part of the 1969 world champions. The two will be honored at the New York Baseball Writers’ Dinner on Jan. 26 and on the field as part of the team's 50th anniversary celebration in June. Credit: Corey Sipkin

Art Shamsky and Ed Kranepool sat in front of the 1969 Miracle Mets display Wednesday in the team’s hall of fame and museum and took a trip back in time. They flashed back to those amazing days while the highlights rolled on the screen behind them and the World Series trophy sat in the case next to them.

“It’s interesting, because I think for Eddie and me, living in this area, it doesn’t seem as long as 50 years as for some of the guys in other areas, because every day somebody talks to me about 1969,” Shamsky said. “It was such an incredible year for all of us who were part of it. Fifty years, it went by pretty fast.

“The legacy of that team has been passed on from generation to generation. But the reality of it is, it was such an incredible time in New York, in the country and the world. What we did as a team collectively helped people get through some really tough times.”

Shamsky, a 77-year-old Manhattan resident and then a platoon rightfielder, and Kranepool, a 74-year-old Jericho resident and then a platoon first baseman, spoke to reporters at Citi Field and met with fans there at a blood drive. The two are scheduled to attend with Cleon Jones and Ron Swoboda when the 1969 team is honored at the New York Baseball Writers’ dinner Jan. 26.

But the real happy 50th anniversary celebration is coming with a reunion weekend when Atlanta visits June 28-30. There will be an on-field ceremony before the Saturday game.

Nobody had expected a 73-win, ninth-place team from 1968 to take a giant leap to 100 wins, then sweep three from Atlanta in the NLCS and beat Baltimore in five for first prize.

“We had such great stars on the team, of course, with Tom Seaver, Jerry Koosman and Cleon Jones,” Shamsky said. “But the reality of that team was that everybody on that team contributed to the success of the team. When we won that World Series, no matter what we did before or after, we were remembered for that team.”

“Hopefully, when he comes up again in 2020, he gets nominated for the Hall of Fame,” Kranepool said. “I really think he deserves it.”

The Miracle Mets clinched their crown when Davey Johnson’s fly to left settled in Jones’ glove. The joyful fans stormed the field.

“I guess Shea Stadium fertilized a lot of lawns around New York,” Kranepool said, “because everyone seems to have the grass.”