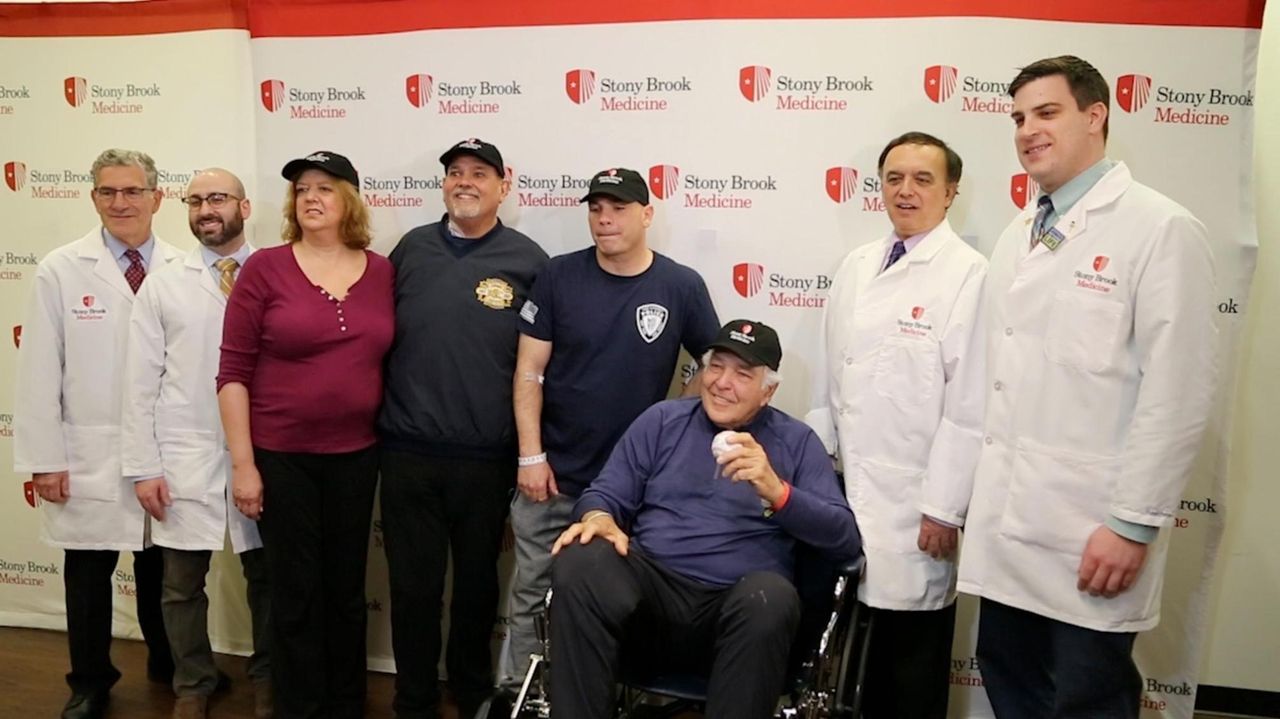 Doctors for former Met Ed Kranepool said at a news conference Friday that he is functioning "close to normal" after having kidney transplant surgery at Stony Brook University Hospital.  Kranepool, 74, received his transplanted kidney from Deborah Barbieri of Glenwood Landing, 56 — and a Mets fan. Credit: Barry Sloan

Ed Kranepool’s second miracle likely will enable him to attend the reunion in June of the first one nearly 50 years ago when he was the first baseman on the 1969 world champion Mets.

At 74, Kranepool has a new kidney, and the perpetual smile on his face Friday underscored the report by Dr. Frank S. Darras that Kranepool’s kidney function was “close to normal,’’ three days after receiving the organ donation from Deborah Barbieri, a 56-year-old Mets fan from Glenwood Landing.

“In your lifetime I guess you're associated, involved with many, many teams,’’ Kranepool said from a wheelchair during a news conference at Stony Brook University Hospital. His wife, Monica, sat teary-eyed in the audience.

Kranepool is expected to be released from the hospital Saturday and will be closely monitored by Darras. “I've been lucky to have a great team at home — my wife and family. And also the Met organization," Kranepool said. "I've been with them since 1962. Those are the only two teams I knew up until that time. Now I have an extended team,’’ he said referring to the transplant team, the donors and their families.

Deborah Barbieri said she was “surprised’’ upon learning that Kranepool would be the recipient of her kidney. She was not a match for her husband. ‘’I decided to take a shot, go on the list, and it's the best thing I ever did,’’ she said.

Her rare A/B blood type was an exact match for Kranepool, Darras said. And the former major-leaguer was fortunate, even though it took two years. “Over 113,000 in the U.S. are awaiting transplants, 8,000 in New York State,’’ Darras said. “Unfortunately, there are not enough organs to get people transplanted.’’

Barbieri’s husband, also a big Mets fan, had been on dialysis for two years. “It's very difficult to sit there with people who are next to you one day and the next day they're not there,’’ Al Barbieri said. “It's usually not a good reason why they're not there. People pass away on dialysis.’’

Cooney, 45, said he belonged to the NYPD in 2001 and was a responder during the 9/11 terrorist attacks on the World Trade Center. He said he has had a good life and just wanted to “pay it forward,’’ by helping someone else. He’s a Yankees fan but said he would celebrate Kranepool’s ‘69 team.

Darras said dialysis likely would have been the next step for Kranepool. “He has gotten very, very close,’’ he said.   “His numbers were at the point, if he didn't get a kidney soon, he was going to be on dialysis. Adding dialysis makes life very rough physically, emotionally.’’

Now, Kranepool is planning a summer of relaxation in the Hamptons and activities related to the reunion the last weekend of June.

“You get that call, they saved your life,’’ he said when learning a donor had been found. “It’s like magic. I do feel better already. They say it'll take time for me to feel as good as I can feel. I feel good. I expect to feel better.’’

Islanders legend Clark Gillies dies at 67
Rangers' Georgiev leads off in goal in first half of back-to-back
Rangers fall behind early, can't catch up against Hurricanes
Parcells believes Schoen is right man for job
Isles try to keep things fresh as seven-game homestand begins
Miller growing into role on Rangers' blue line
Didn’t find what you were looking for?