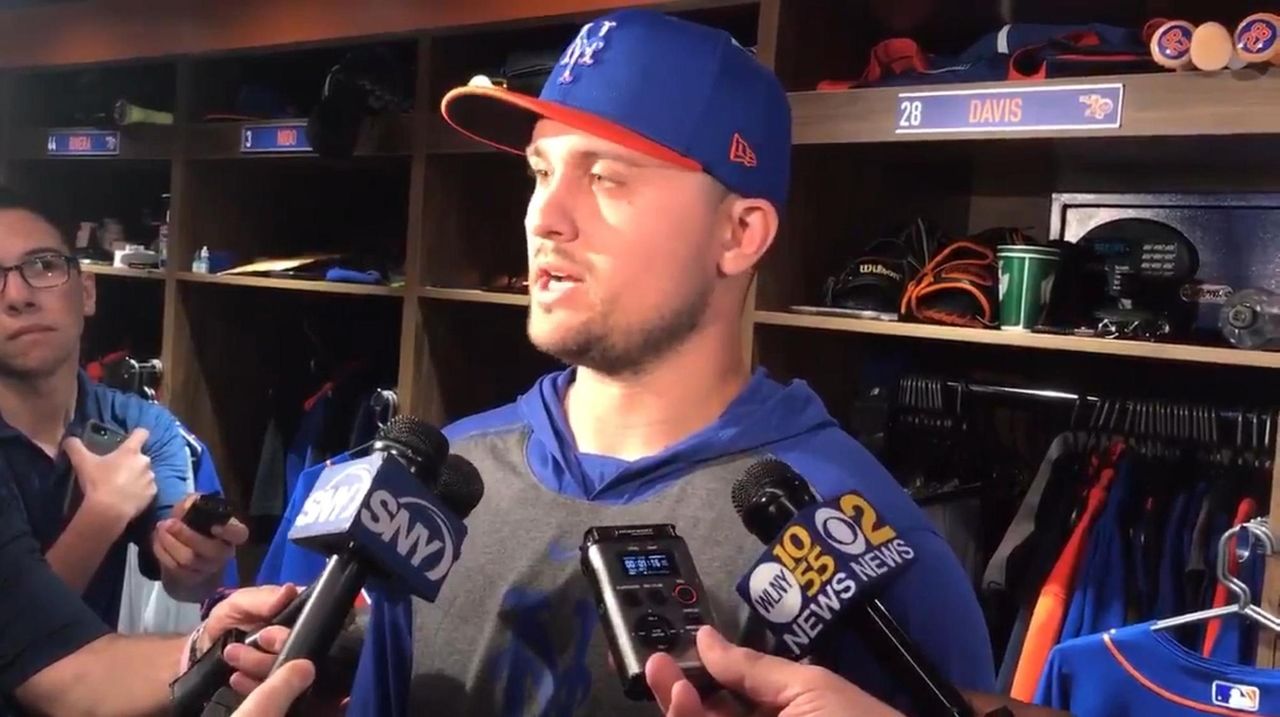 Mets third baseman J.D. Davis addressed the media for the first time this spring, discussing his time with the 2017 Houston Astros and the sign-stealing scandal surrounding that team on Friday, Feb. 14, 2020 in Port St. Lucie, Florida.  Credit: Newsday / Tim Healey

PORT ST. LUCIE, Fla. — As the 2017 Astros’ apology tour came to Clover Park on Friday, the Mets’ pair of cheating champions appeared contrite. They also stopped short of giving credit for their World Series title to the illegal sign-stealing scheme or even acknowledging that it helped Houston hitters.

Outfielder Jake Marisnick, who had the best offensive season of his career that year, said he wanted “to start with apologizing for what happened in 2017” before taking questions. He said he feels “terribly” and is experiencing “regret,” and added that he knows he has to earn the respect of his new teammates — some of whom he already has spoken with.

Leftfielder/third baseman J.D. Davis, a rookie who hit poorly in two dozen games for the 2017 Astros, said he was “ashamed” of the arrangement and acknowledged lying — saying he “spoke prematurely” — when asked about the allegations in December.

“Of course it’s regrettable and you feel ashamed to be part of it,” Davis said. “It’s terrible for baseball. Baseball took a couple steps backward because of these events and the investigation.”

Said Marisnick: “There’s a line, and it was definitely crossed.”

Major League Baseball found the Astros guilty of stealing opposing catchers’ signs with a camera in centerfield, which they connected to a monitor near their dugout. They had someone watching the monitor and banging a trash can with a bat to communicate which type of pitch was coming.

Given that he produced the best hitting of his career in a season in which he often knew what pitch was about to be thrown, what role did that information play?

“It’s hard to pinpoint,” he said. “I’m not going to dig too deep into every single at-bat that year. I feel terrible about it and it’s a really bad feeling. I think the thought behind it was to give us an advantage. I’m not sure if it did or didn’t, but I think that was the reasoning behind it.”

Marisnick said he had “a small conversation” about the issue with Marcus Stroman, who last month ripped the Astros in a series of tweets, saying they were “ruining the integrity of the game.” Marisnick expects to have more of those types of talks.

Davis had only a bit role on that team, hitting .226 in 68 plate appearances. He said he was “star-struck” upon being called up and didn’t remember his initial feelings or reaction when he learned of the Astros’ scheme.

“I didn’t really think much of it, going up there fresh and new and being part of the major-league clubhouse,” Davis said. “Maybe what they did was the norm, I have no idea; I’ve never been in another big-league clubhouse to compare the two. Looking back on the situation and the details of it, it’s terrible. It’s terrible for the game of baseball.”

In December, Davis said in part: “I was kind of the freshman among the seniors and everything. I really had no idea what was going on or what’s really happening.  I wasn’t aware of anything. And even if there was, I wish I would have known because I batted only like .180, .200, something like that. I really have no idea, no clue.”

He walked that back Friday, noting, “I was aware of it and again, I was a guy who was going up and down [between the majors and minors].”

Would the Astros have won the World Series if they didn’t cheat?

“That I do not know. We were a pretty talented team,’’ he said. “That’s a pretty big ‘if’ question. I really don’t know. Their up-and-down-the-lineup is pretty good and their pitching staff at that time was incredible.”

Davis said he has worn his World Series championship ring “maybe once or twice.”

Said Marisnick, “It’s hard to say if that team would’ve won the World Series with or without that. It’s a special team, but honestly, I can see why people would view it that way. But that’s a talented team.”