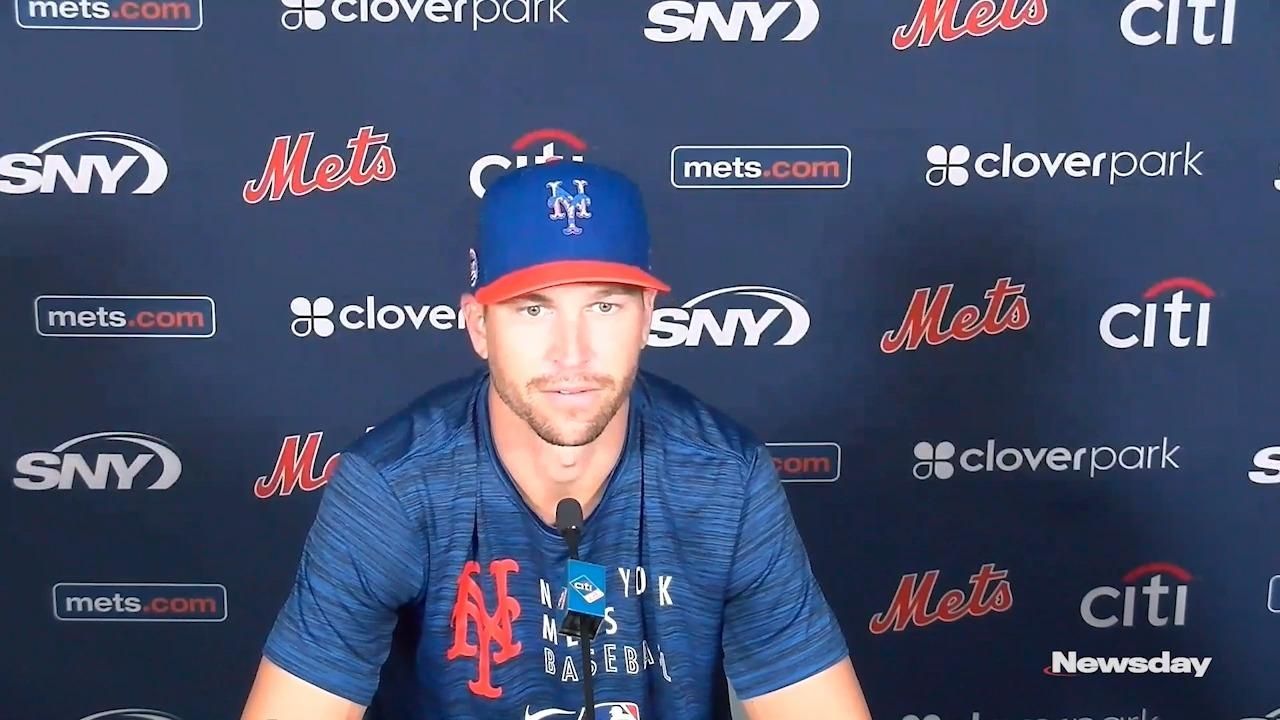 Mets ace righthander Jacob deGrom talks about winning a World Series with the Mets, setting goals for a third Cy Young Award and his opt-out clause during spring training on Feb. 19, 2021.

Jacob deGrom said he thinks it is "really, really cool" when a player stays with one team for his entire career, that his body feels better now than at any other point in his major-league life and that he plans to be an elite pitcher for "quite a bit longer."

But in June he will turn 33, an age at which most pitchers have at least begun their decline. He just watched the Mets offer a far less accomplished pitcher a higher salary in free agency. And he has a big decision looming with the ability to opt out of his contract after the 2022 season.

Insisting that he hasn’t thought much about his contract or his opt-out opportunity and that he didn’t closely follow the Mets’ pursuit of Trevor Bauer, deGrom also didn’t want to explain why he fired his previous agency (CAA) and hired a new one (VC Sports Group) during the winter.

"It was just a decision that I decided to make," he said Friday.

DeGrom is not at a career crossroads yet. But if you squint, you can see the big traffic lights not too far down the road.

Let’s start with the most sentimental piece: DeGrom loves to be a Met, he said. He was around for the end of David Wright’s career. Seeing how beloved Wright is, how emotional his farewell was, "definitely had an impact on me," deGrom said.

"One thing I think is really, really cool is when anybody spends their entire career with one team," he said. "You don’t see it happen a whole lot anymore. So it’s definitely something that I’ve thought about and I guess we just have to see when that time comes.

"Seeing how well [Wright] was treated by Mets fans and being a Met for life and what that was [like] was definitely cool and special. Being there for the last time he took the field, that was really cool. So that definitely weighs on your mind. That’s a decision that will be made when the time comes."

For as much money as deGrom is making, there is uncertainty over how long he will pitch under his current contract, signed on the eve of Opening Day 2019.

"I’ve definitely enjoyed my time here and signed long term here," he said. "Haven’t really thought too much about the opt-out."

And then there is the matter of Bauer. His three-year, $102 million deal with the Dodgers will pay him a reported $40 million this year, the highest single-season salary in MLB history.

The Mets reportedly offered Bauer a similarly front-loaded three-year deal worth $105 million. Had he accepted, deGrom — probably the best pitcher in the world — would’ve been the second-highest-paid pitcher in his own clubhouse.

Does deGrom feel a need to talk to team president Sandy Alderson and the front office about that?

"He waited till free agency. And that’s what happens," said deGrom, who would have been a free agent this past offseason had he not signed an extension. "I signed a deal before free agency. So that would be a discussion to have with my agency, but I’m happy to be here. I signed the deal and really haven’t looked back. Just try to go out there and compete and do the best I can and play to the best of my ability."

Lennon: Mets need to capitalize on the 'deGrom window'Winning a World Series with the ace should be the team's No. 1 priority the next couple of years.