Jacob deGrom of the New York Mets pitches during a simulated game at Citi Field on July 14, 2020. Credit: Jim McIsaac

Good news meant the Mets could loosen up about Jacob deGrom’s stiff back.

An MRI on Wednesday “didn’t show anything concerning” to the Mets, a source said, one day after their ace pitched only one inning because of back tightness.

Manager Luis Rojas described deGrom as day-to-day and said it was too early to know whether this would affect his availability for Opening Day, which is July 24. 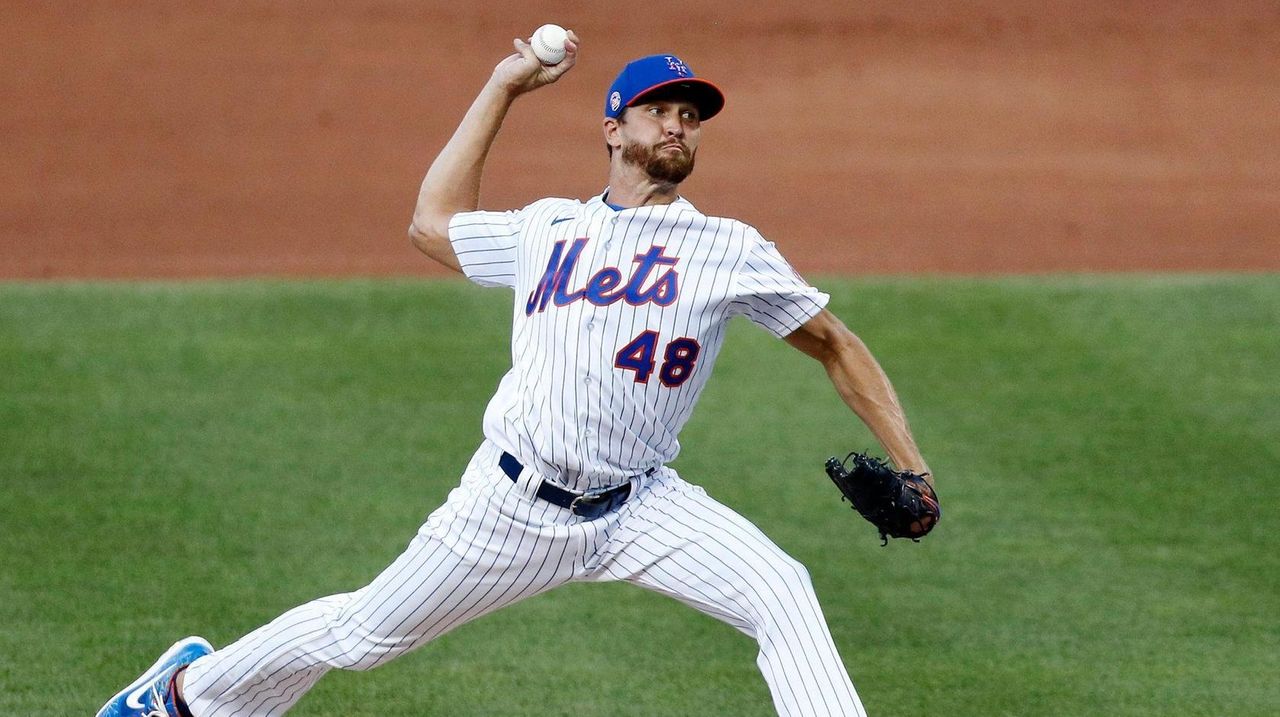 Rojas clarified that as of Wednesday afternoon he had neither seen nor spoken to deGrom since Tuesday night, when deGrom exited after the first of his approximately four scheduled innings. DeGrom was at Citi Field earlier Wednesday to be evaluated by the training staff but “I think we were in a meeting,” Rojas said.

The Mets didn’t notice anything wrong with deGrom until he expressed discomfort upon coming off the field.

“I think he touched three digits on the readings during the inning,” Rojas said. “[There was] nothing that we saw. Nothing that he mentioned or anything. He shared it with the medical staff and the pitching coach after the first inning.”

DeGrom dealt with preseason back tightness in 2016 and 2018, and both times it turned out to be a minor issue. In 2018, it slowed him down just enough that he missed Opening Day, pitching the second game of the season instead.

Critical context to any injury: The 2020 season is only 60 games. Even a small problem can cost a player a significant portion of the season.

“Absolutely,” Rojas said. “Injuries are going to play a big part in a short season like this.”

This hiccup puts into question deGrom’s schedule for the rest of camp. Pre-tightness, he had been penciled in to start an exhibition game this weekend against the Yankees, his final tune-up before the Mets host the Braves to begin the regular season a week from Friday.

Now, Rojas said he wasn’t sure who will start either of those games, Saturday at Citi Field or Sunday at Yankee Stadium.

“It’s a little bit too early still to make those decisions,” Rojas said.

If deGrom misses the start of the regular season, Marcus Stroman, the would-be No. 2 starter, would become the likely Opening Day replacement. He pitched the first game of the year twice with the Blue Jays, including last season.

“It's not a secret that Jake would be your Opening Day starter,” Rojas said. “We'll see what Jake's status is, and we'll learn more each day.”

The bigger question would be who would replace deGrom, or any starter who goes on the injured list, in the rotation. There is not an obvious choice for the next man up.

Rojas said the Mets have not discussed the possibility of using an opener — using a reliever for an inning or two at the start of a game — but he is open to it in the future.

Among the team’s backup starting pitchers are righthanders Walker Lockett, Corey Oswalt and Erasmo Ramirez and lefthanders David Peterson and Kevin Smith (neither of whom have pitched above Double-A).

Ramirez has the most major-league experience of that bunch — 193 games (92 starts) over eight seasons — but would need to be added to the 40-man roster.

Asked which of those has impressed during camp, Rojas didn’t get specific.

“They all look really good,” he said. “Still nine days to go in camp. I think that we’ll know what we have in the depth as far as knowing which guy can come in and help the team.”

Mets experiment with fake crowd noise at Citi FieldDuring the intrasquad scrimmage, there was the sort of white noise made by thousands of fans normally in the stands. At certain moments, they would turn up the volume.