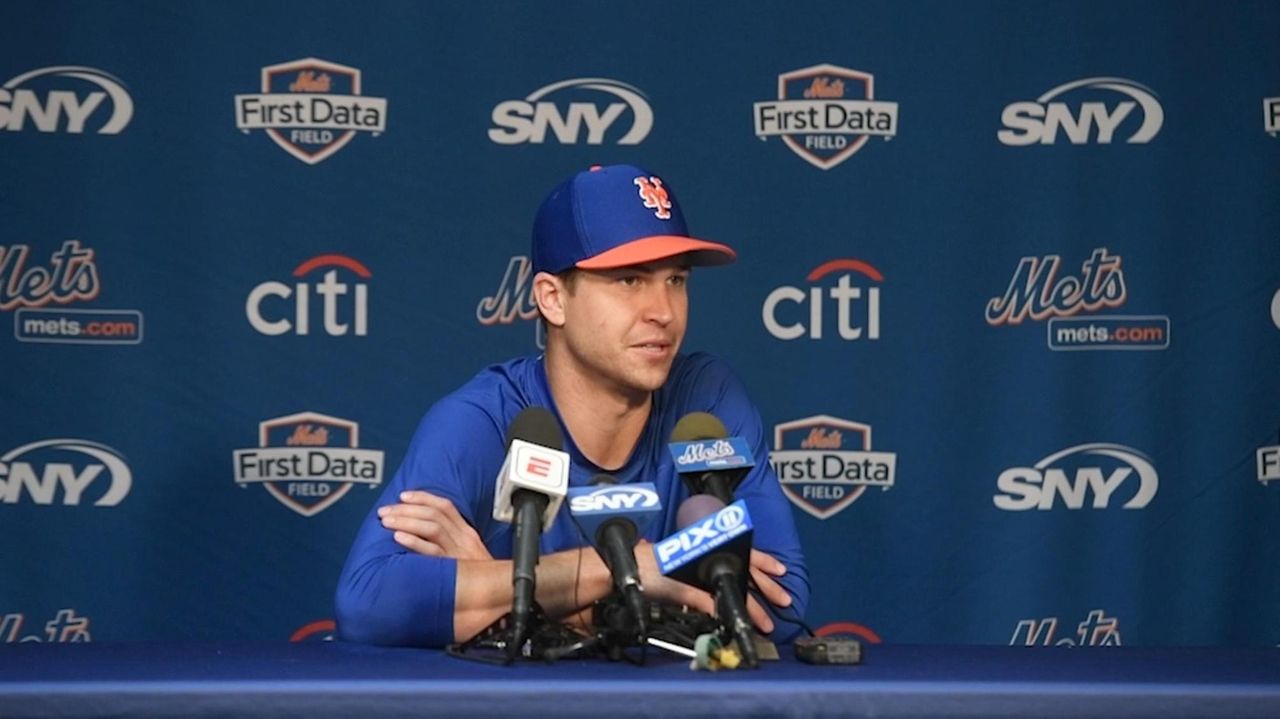 In his first press conference since setting an Opening Day deadline for negotiating a new contract, Mets pitcher Jacob deGrom said Thursday that he likes playing in New York and wants to stay but "it’s up to them." Credit: Newsday / Alejandra Villa-Loarca

PORT ST. LUCIE, Fla. — Jacob deGrom loves being a Met, he says, and he wants to be one for a long time.

Similarly, the Mets love deGrom, they say, and they want to keep him for a long time.

But that’s about as far as the parties have gotten on negotiations for a long-term contract extension for the reigning NL Cy Young Award winner. And deGrom didn’t rule out self-imposed workload restrictions if the sides can’t make a deal.

“They have every right to do whatever,” he said Thursday. “But as a player, you would like to be thought of as a future part of the organization.

“The line of communication is still open. We have not received an offer but continue to talk. I really enjoy playing here and would like to be here, but that’s kind of up to them.”

Brodie Van Wagenen, deGrom’s agent until the Mets hired him as general manager in October, said: “Jacob is 100 percent a part of our future, now and in hopefully years to come.”

It was the first time deGrom publicly discussed a possible extension since Van Wagenen made clear in the fall his desire to sign him long-term. Talks have been minimal, but “that can change in one phone call,” deGrom said. Van Wagenen said deGrom’s new CAA agents — led by Jeff Berry, Van Wagenen’s longtime colleague — will visit “soon” to discuss a potential contract.

The sides have set an Opening Day deadline to get a deal done, or else they will have to wait at least until next offseason. Asked if he would be open to doing a deal next winter or if he would rather hit free agency after the 2020 season, deGrom said he would have to re-evaluate if it got to that point.

DeGrom also didn’t rule out limiting his workload, an idea pitched by Berry to players generally as a way to protect their value as they near free agency.

“You play this game because you love it, and then you have an opportunity to look out for your family and your future, so I think you have to see what’s right for you to do,” deGrom said. “I think that’s going to be a discussion that’s going to have to be had with my agents.

“Like I keep saying, I’ve enjoyed my time here. I like playing in New York. Love it. Fans have been great to me, great atmosphere. You would like to see yourself, or I would like to see myself, as part of the future.”

Van Wagenen said he doesn’t anticipate an extension-less deGrom shutting himself down as an issue.

Van Wagenen said among the reasons they haven’t gotten deep in negotiations is they wanted to get the arbitration settlement out of the way, as well as get a better idea of how much money the Mets have on the books for 2019.

Van Wagenen also said the Mets are still analyzing how much to offer deGrom. “Once it’s done, we’ll communicate some of that information to the player and his agent,” he said.

Contract talk overshadowed Mickey Callaway’s announcement that deGrom will start Opening Day, March 28, in Washington. It was such a formality that Callaway couldn’t keep a straight face as he said it. “I think Jacob decided that in June,” he said. “Obviously, he’s our guy.”

It will be his first Opening Day assignment. Since he was the NL Rookie of the Year in 2014, the Mets opened with Bartolo Colon (2015), Matt Harvey (2016) and Noah Syndergaard (2017-18). DeGrom was supposed to start last year, but a minor physical issue early in spring training cost him a couple of days of prep time.

The biggest question between now and then: Deal or no deal?

“My goal is for Jacob to be here for the long haul. We are going to be operating this spring with that goal in mind,” Van Wagenen said. “Regardless of what happens by Opening Day, we’re going to continue to have that mindset. From this chair, I think that he’s important to what our plan is and our execution of the win-now and win-in-the-future mantra.”

Veteran defenseman Chara comes home to Islanders
LI's Coan, No. 12 Notre Dame hold off Purdue
Mets' Syndergaard closing in on return to the majors
Rieber: It's time to bench Sanchez — and then dump him
Cano remains a presence, and a voice, for the Mets from afar
Giants still figuring out how to best utilize Toney
Didn’t find what you were looking for?