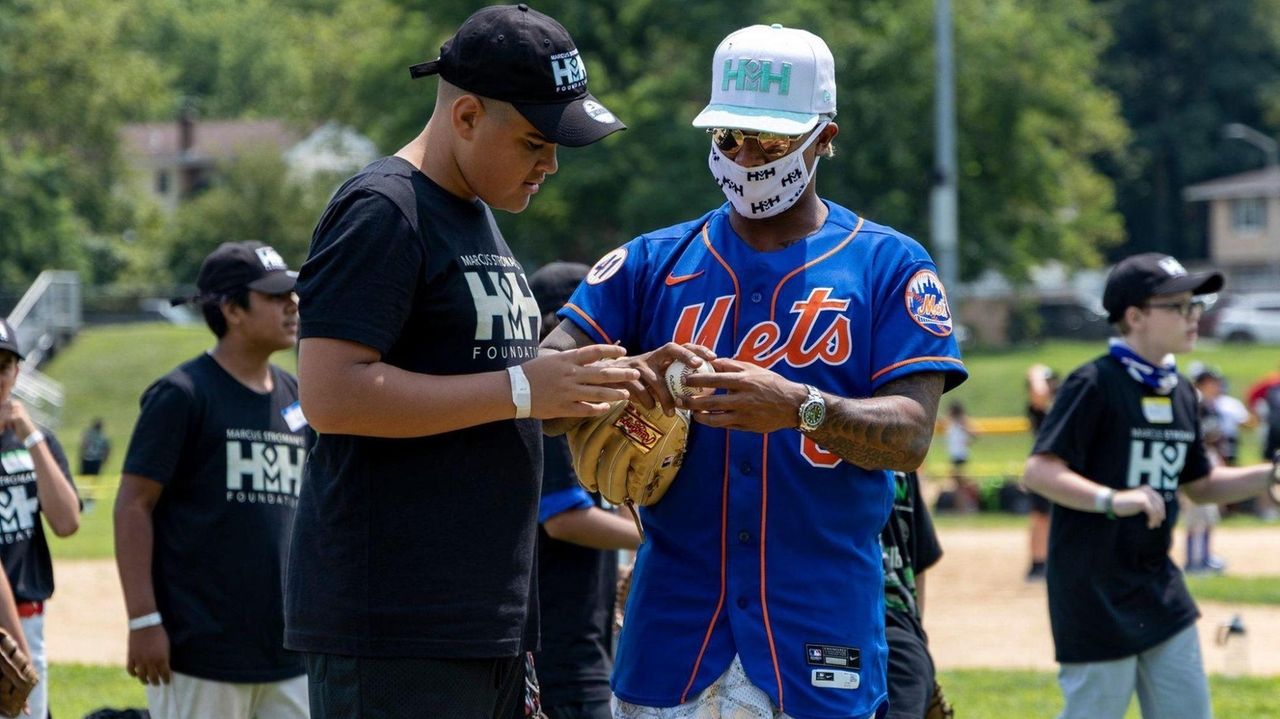 As Marcus Stroman continues his impressive 2021 bounce-back, his future beyond this season remains a question mark.

Despite having potentially the best season of his seven-year career, the 30-year-old righthander said that he and the Mets have not engaged in any contract extension negotiations as he prepares to enter free agency this winter.

"None at all," Stroman said at his HDMH (Height Doesn’t Measure Heart) Foundation’s youth baseball/softball clinic in Glen Cove on Thursday. "Zero talks. To be honest, I’m not really concerned about that. I’m just concerned about going out every five days and putting my team in a position to win."

But while speculation about his expiring contract with the Mets grows, Stroman remains focused on the present.

"We’ll see what happens," Stroman said. "I live in the now and I truly don’t focus on tomorrow, so we’ll see how it all plays out."

Stroman was joined by a number of his teammates at the event, including left fielder Dominic Smith and fellow righty Taijuan Walker.

"This is the first clinic for my foundation and it’s going great," Stroman said. "We have about 200-plus kids out here, 40-plus coaches, 40-plus volunteers. It’s an amazing event and we’re raising money toward giving back to inner-city youth.

"And we’re also developing a scholarship fund to provide educational opportunities for those that wouldn’t have been able to support themselves. Being able to give back is something I’ve always looked forward to and I feel blessed to be in a position to do so."

Pitching to the tune of a 2.59 ERA this season, Stroman built on his strong campaign on Wednesday, allowing only one hit over eight scoreless innings in a 7-0 win over Cincinnati.

After opting out of the 2020 season due to the COVID-19 pandemic, the Medford native said the key to his success following the long layoff has been his physical and mental sharpness.

Stroman believes the Mets, who entered Thursday 3.5 games ahead of Philadelphia for first-place in the NL East, have shown plenty of character by overcoming a myriad of obstacles this season.

"I think we’ve played really well through all the adversity we’ve had all season," Stroman said. "The weather, scheduling conflicts, a bunch of our key players going on and off the IL. I don’t think we could have played better through that adversity."

With the non-waiver trade deadline approaching on July 30, Stroman is ready to embrace any moves the Mets may – or may not – make as they look to make a postseason push.

"We’re excited and we’re ready to compete," Stroman said. "If we get any additions that could help the squad we would love that, but I love what we have."

Nets await outcome as Dinwiddie has talk with Wizards
Lennon: What a difference a week makes for recharged Yanks
LI's Capobianco advances to Olympic diving semifinals
Azeez Ojulari impressing Giants in first camp
Darnold excited to play Week 1 because of fans, not Jets as his opponent
Sheldon Rankins: Jets' D-line will wreak havoc on QBs
Didn’t find what you were looking for?