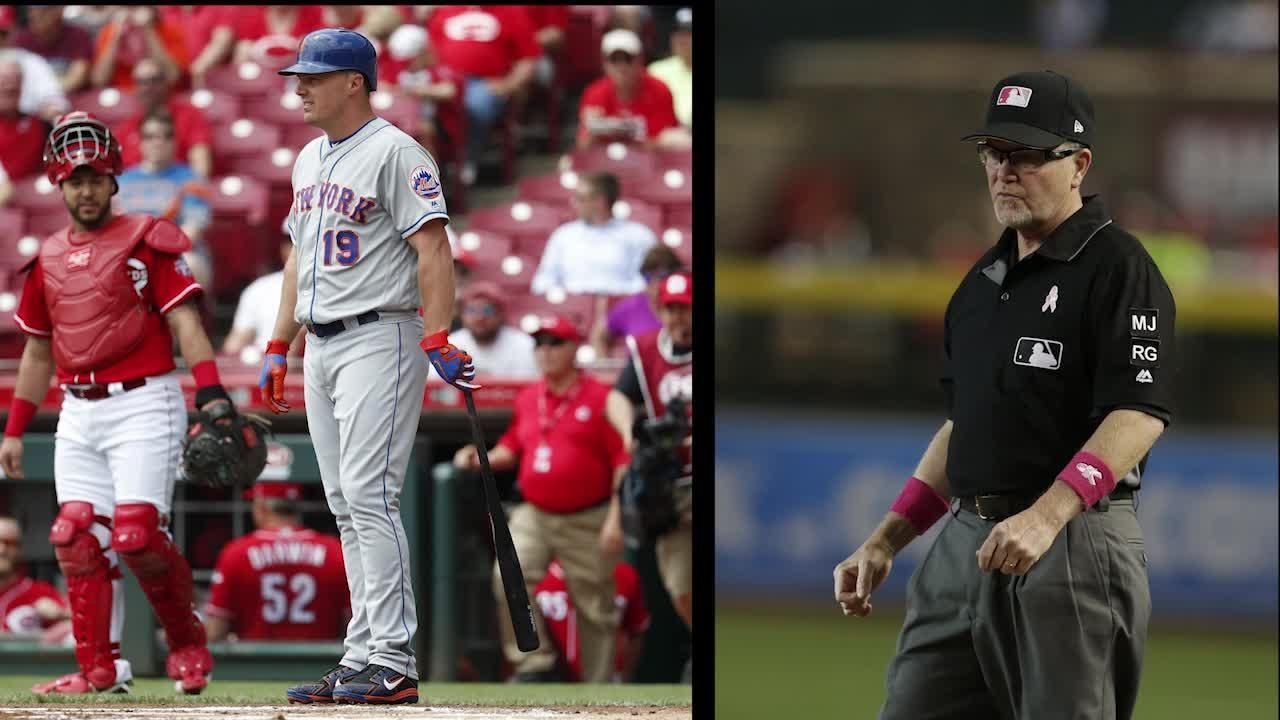 Umpire crew chief Jerry Meals explains what happened when the Mets lost an out for batting out of order in the first inning against the Reds on May 9, 2018. Credit: Cincinnati Reds

CINCINNATI — The Mets started their day by walking to the plate in the wrong order and ended it by walking off the field as losers for the eighth time in nine games.

Adam Duvall’s 10th-inning home run against AJ Ramos handed the Mets a 2-1 loss Wednesday against the Reds. The Mets dropped two out of three to Cincinnati, the worst team in the National League, and scored three runs in their final 23 innings against the Reds, who started that stretch with the worst team ERA in baseball.

But the Mets’ most egregious unforced error of the game — and season — came because the coaches gave the hitters the wrong lineup. In the first inning, they batted out of order and lost a runner in scoring position because of it.

“It probably cost us the game,” manager Mickey Callaway said. “We had a chance to score in the first and we didn’t.”

The official lineup card that the Mets gave umpires before the first pitch had Asdrubal Cabrera batting second and Wilmer Flores third. But the version the Mets released publicly — and the version they posted in the clubhouse and dugout for the players — had Flores second and Cabrera third.

Interim manager Jim Riggleman and the Reds’ bench used that to their advantage. When Flores stepped to the plate out of order, they said nothing. They remained silent when Flores struck out swinging.

When Cabrera stepped to the plate, the Reds still said nothing. Cabrera blooped a double down the leftfield line. That’s when the Reds brought the inaccurate order to the attention of plate umpire Gabe Morales, who charged the Mets with an out, ending the inning.

Cabrera’s at-bat was erased. Cleanup hitter Jay Bruce, who had nothing to do with anything other than stepping to the plate to hit after Cabrera, was charged with the penalty for batting out of order (technically, an unassisted putout by catcher Tony Cruz). No. 5 hitter Adrian Gonzalez led off the second inning.

“I still have no idea. I wasn’t part of it. I was skipped over,” Bruce said. “I’m not really in a position where I just want to be giving away 0-for-1s, you know?”

Crew chief Jerry Meals explained that when the Reds pitched to Cabrera, it legalized Flores as a hitter. Bruce (not Cabrera) was supposed to hit after Flores, but did not, hence Bruce being penalized with the 0-for-1.

Confusion reigned. Bruce said a couple of the umpires in the field told him they thought he, not Gonzalez, should have led off the second inning.

Said Flores: “I was hitting second, from what I knew. When they called Bruce out, I was confused.”

The final word from Bruce: “I don’t really have a lot of answers, to be honest with you. I don’t know.”

Callaway took responsibility for what he called “just an administrative thing.” There are two versions of the lineup, one printed out (posted for players to see) and one handwritten (to give to umps). “What was put in the computer was wrong,” Callaway said. The version of the lineup he wanted was the one the umps received — and the one the Mets had to stick to after the first inning.

Asked if he or bench coach Gary DiSarcina fills out the actual lineup card, Callaway said: “I’m responsible for it. I have to double-check, triple-check and quadruple-check what’s put on there and what’s put on the board.”

The next time through the lineup, Callaway checked with the umpires to ensure Cabrera and Flores batted in that order, the right order. Cabrera grounded out to first to drive in Brandon Nimmo (triple) in the third inning.

The error with the lineup card relegated Zack Wheeler’s sharp start (six innings, one run, seven strikeouts) to a footnote on an embarrassing day amid a frustrating stretch for the Mets. “It’s a weird baseball blunder, I guess you could say,” Wheeler said.

Of all the recent losses, Callaway said it was the issue with the lineup card that got to him the most.

“The most frustrated I’ve been is about the administrative thing that happened today, because obviously I didn’t get the job done there,” Callaway said. “I was very [expletive] at myself.”

Like Newsday Sports on Facebook Wrong lineup card puts chill in managersIt's the type of thing that could make a manager wake up in a cold ...