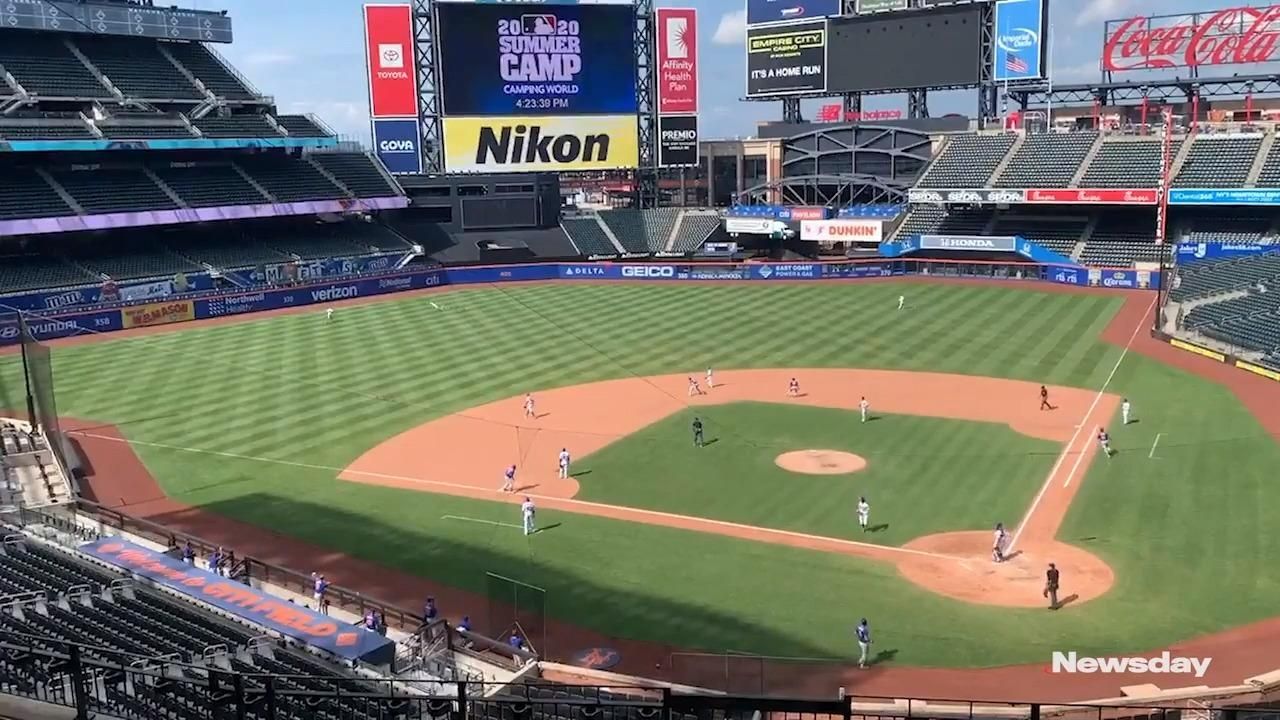 The Mets experimented with fake crowd noise during a summer camp workout at Citi Field on Wednesday. Fans will not be permitted in MLB stadiums to start the 2020 season, and perhaps for the entire shortened season. Credit: Newsday / Tim Healey

The Mets’ intrasquad scrimmage Wednesday came with a new twist: Fake crowd noise pumped in over the public address system.

Almost all of the time, that meant there was a low but consistent murmur, simulating the sort of white noise made by thousands of fans normally in the stands. At certain moments, like when a player got a hit or made a nice catch, a much louder roar lasting several seconds exploded from the speakers.

Jeurys Familia and David Peterson, who both pitched Wednesday, were indifferent.

“I’m so focused and my concentration is so high on the mound that that’s the last thing on my mind, the sound of the fans,” Familia said through an interpreter. “If they do put noise or if we play in silence, I don’t think it’s going to make a difference.”

Peterson said, “It was interesting to hear between innings, but once the innings started, it was all about competing for me and it was kind of irrelevant.”

The Mets also have been playing pitchers’ warm-up songs and batters’ walk-up songs, as well as music between innings.

The team might further experiment with the fake crowd noise when they host the Yankees for an exhibition Saturday.

The Mets officially put relievers Brad Brach and Jared Hughes on the injured list Wednesday — but without any specific injury listed. Neither has participated in Mets camp so far.

Teams aren’t listing reasons when players go on the IL for coronavirus-related reasons. They can’t reveal a positive COVID-19 test unless the player approves of doing so.

Robinson Cano and Yoenis Cespedes each took a step forward by playing three innings in the field.

For Cano, it was his first scrimmage action of camp after he returned from an eight-day absence Tuesday. For Cespedes, it was more valuable time on defense, where he has lagged behind his peers (while impressing with his hitting ability) as he seeks to end his two-year absence from the majors.

“Robbie, from eyesight [Tuesday] when I saw him before doing our workout, he looked great,” manager Luis Rojas said. “And then he went into the workout and looked even better.”

Gordon Beckham has been absent the past two days, Rojas said. The Mets did not provide a reason why . . . Lefthander Justin Wilson said he was able to face hitters — including the Cardinals’ Matt Carpenter — while home in the Dallas during baseball’s shutdown. … The Mets like the idea of using a roster spot on a player such as outfielder Johneshwy Fargas, who runs very fast (but has never played above Double-A). “We have a few guys here who can do some things with their speed,” Rojas said. “We have a vision of some strategy with those guys coming in and pinch-running, or in the extra-inning rule starting there at second, to have that advantage.”

USA’s Olympic men’s basketball win streak stopped at 25
Lennon: Where do Mets sit as far as remaining on top of NL East?
Lennon: Yankees have to be buyers, and this win backed that up
Derek Jeter's life beyond the field
Walker shelled again as Blue Jays rout Mets
Yankees stun Red Sox by scoring four two-out runs in eighth
Didn’t find what you were looking for?