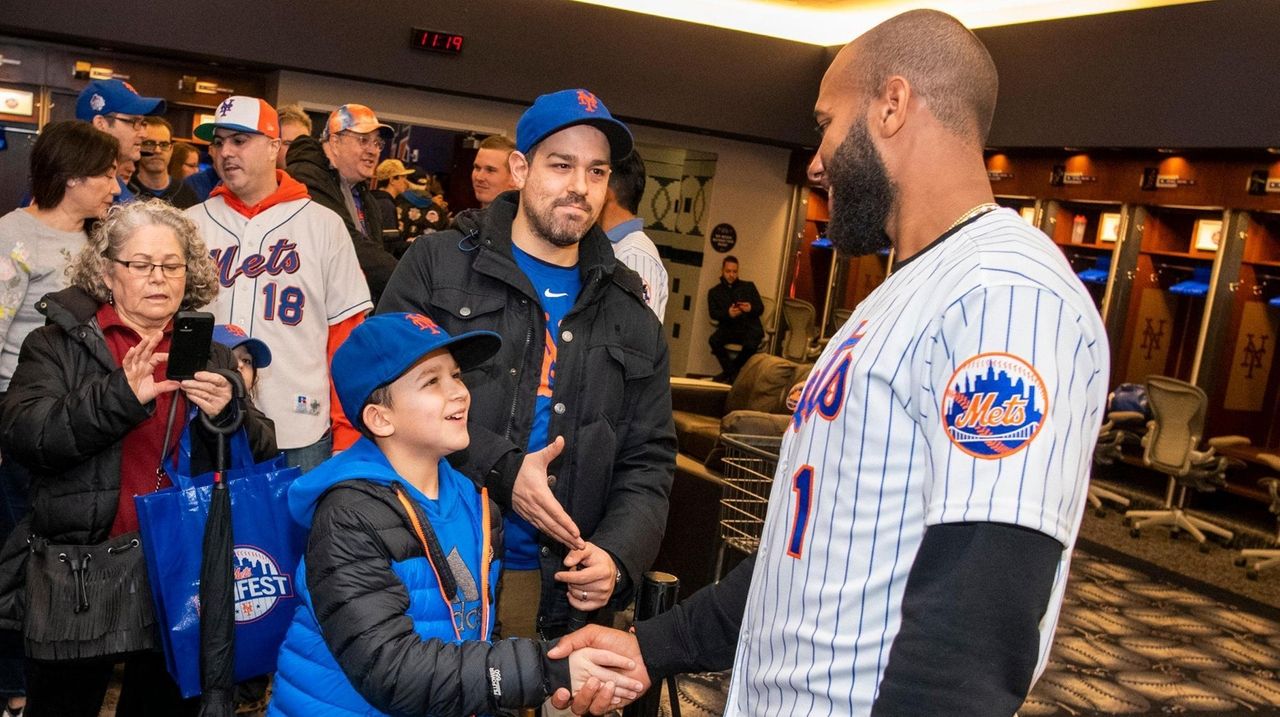 Fans walk around in the Mets' clubhouse, get player autographs and sit in the dugout as part of the inaugural FanFest at Citi Field on Jan. 25, 2020. Credit: Newsday / Shelby Knowles

Pete Alonso has seen Luis Rojas lose his cool. Once.

It came on a random May 2018 day during the second game of a doubleheader in Manchester, New Hampshire. Rojas was the manager of the Double-A Binghamton Rumble Ponies. Alonso was the slugging first baseman. It was in the late innings of a game tied at 3 against the New Hampshire Fisher Cats, a Blue Jays affiliate, when former Mets minor-leaguer Nick Sergakis stepped up.

Sergakis mashed a three-run home run that proved to be the game-winner. It was the last long ball of his pro career.

“I’ve never seen Luis lose it like this,” Alonso said. “[Sergakis] absolutely destroyed this baseball, and Luis is jumping up and down with his hands in the air, just super-elated like a little kid. And he is so calm, cool and collected, and just to see him so excited for Nick — who was kind of struggling — it just shows a [lot of character].

“He’s got a big heart, he’s rooting for all his players, and that was a big moment for Nick and [Rojas] realized that. He’s pulling not just for certain guys but he’s pulling for everybody. He wants all the players to succeed and play well. And that’s one of the reasons he’s going to be great for us.”

That, Alonso said, is the kind person the Mets have as their new manager.

A hectic two-week stretch for the organization — Carlos Beltran being named in Major League Baseball’s report about cheating by the 2017 Astros, Beltran losing his job, the Mets doing another manager search, Rojas getting hired — got its postscript at Citi Field on Saturday when the team hosted Fanfest, the first public appearance for players in this January tumult.

The general sentiment: Rojas is a terrific choice.

Alonso, who played for Rojas in 2017-18, said he talked to general manager Brodie Van Wagenen after Beltran was let go to express concern about the possibility of the Mets bringing in someone from the outside.

“It’s just a great dynamic of people and I didn’t want that to change,” Alonso said. “I was just like, look: Luis works great with everybody, it would make sense to have someone who works well with other people. Because at the end of the day, if someone butts heads or clashes in a workplace, it doesn’t translate to good results. Luis is a great guy, he’s paid his dues and I think he’s going to be a great fit for us.”

Jacob deGrom said he believes that, too. The two-time Cy Young Award winner played for Rojas in 2012 for Class A Savannah, Rojas’ second season as a manager and deGrom’s first after his long rehabilitation following Tommy John surgery.

“Knows the game very well, communicates really well with everybody,” deGrom said. “You can ask every guy in there who has been around him. Just a good baseball guy and a really, really good person.”

Robinson Cano, who knew Rojas only from Dominican baseball circles before 2019, said, “Great choice by Brodie. Knowing Rojas and seeing him manage in the Dominican and being able to talk to him last year during games, the knowledge he has of the game — he can do a good job for us.”

Steven Matz also goes way back with Rojas, to 2013 in Savannah, when they won a South Atlantic League title.

“Seeing Rojas today, it was just like it’s always been,” Matz said. “I don’t think there’s much of a difference, other than you’re in closer quarters in the minor leagues. You’re riding the bus together and in smaller clubhouses, eating ham sandwiches together. Other than that, it’s the same.”

Matz said it was “difficult” to see the Mets part with Beltran, whom he called “a great baseball mind and a great guy.” Alonso called it “very unfortunate.”

But the overriding sense from the Mets was that they’re over it.

“It was difficult to hear that news, especially for [Beltran], because he was excited to lead this team,” Matz said. “But ultimately, it’s fine. We got Luis Rojas as our manager.”

One more chance for young Rangers to show they belong
1:50
How Yankee Stadium reacted to Altuve's game-changing homer
No plans for fans to attend Jeter's Hall of Fame ceremony
NYCFC's offensive approach not so one-sided in 2021
Kyrie drops 45, but KD struggles as Nets suffer fourth straight loss
Barry Trotz juggles Isles' top line, looking for some scoring
Didn’t find what you were looking for?