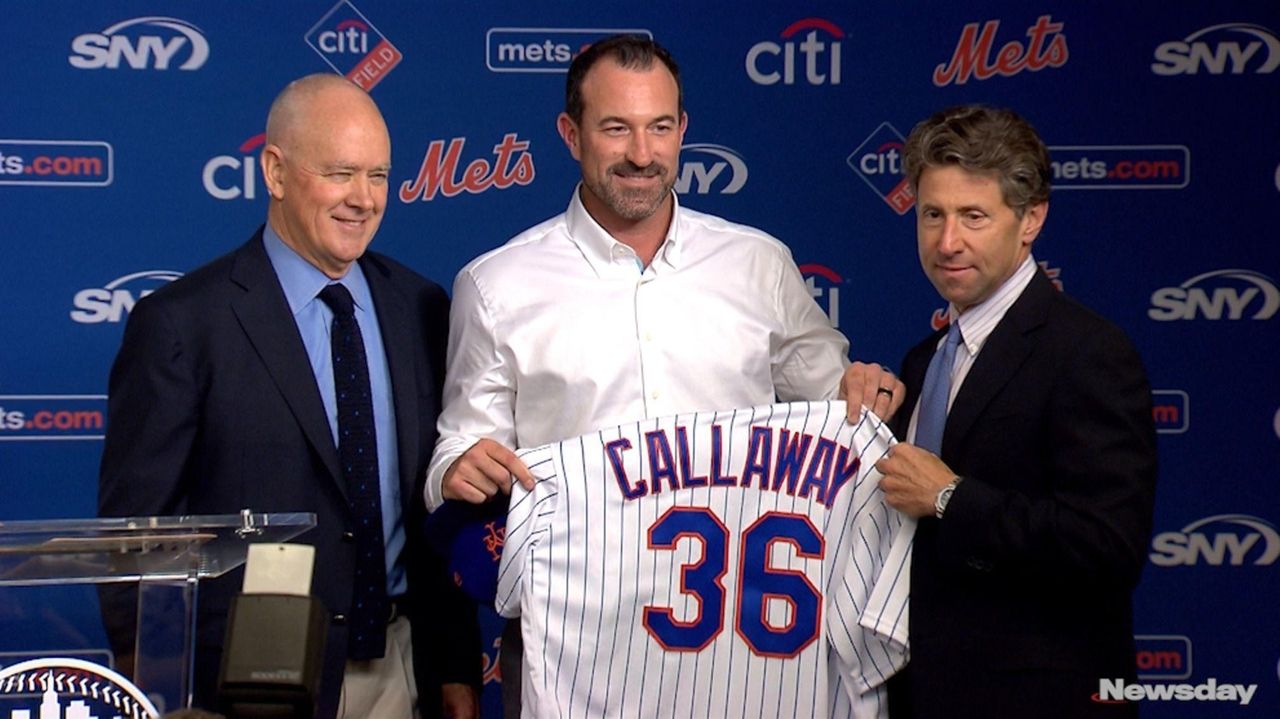 On Monday, Oct. 23, 2017, the Mets officially introduced Mickey Callaway as the 21st manager in franchise history. Callaway had been the Indians' pitching coach for the past five seasons, replacing Terry Collins, who was bumped upstairs when his contract expired at the end of the 2017 season. This will be Callaway's first assignment as a major-league manager. Credit: News 12 Long Island

The plan had been to proceed to a second round of interviews. But once Mickey Callaway presented his case to become the Mets’ 21st manager, team brass shifted focus. Their mission no longer was whom they would hire but how they could persuade him to take their offer.

After a three-hour Manhattan lunch with owner Fred Wilpon, general manager Sandy Alderson said Callaway was “too exhausted to say anything but yes.”

“I am the most excited guy in the world right now to be here and to be able to work with these people,” Callaway said Monday at a news conference in which he was officially announced as the Mets’ manager.

The Mets began with more than 30 candidates. Only six were interviewed, including a previously undisclosed hopeful, broadcaster and former player Mark DeRosa. But Callaway, 42, emerged as the winner, his candidacy bolstered by his success as Indians pitching coach and what Alderson called “a contemporary thinker in terms of strategy.”

Rieber: All about love for new Mets manager Callaway

“I’m probably the most excited guy you’re going to see in a long time,” said Callaway, who showed some of the qualities that made him the replacement for Terry Collins. Callaway has never managed at any professional level, yet he handled his introduction with wit and charm.

He said his brother was named after Casey Stengel, the Mets’ first manager, and that he was named for Mickey Mantle.

Buzzwords colored his comments, too. He spoke of instilling a cohesive culture in which collaboration would be embraced. It echoed his experience in Cleveland with manager and mentor Terry Francona.

For Callaway, leaving the Indians pitchers he helped mold was tough, even though he long envisioned himself as a manager.

“When I was breaking the news to them about this, I was tearing up,” he said. “I cared so much about them and who they are as people that it was a very difficult decision. And that was probably the hardest part of this whole decision.”

Callaway deftly avoided questions he could not answer — such as how he will fill out his coaching staff — an acknowledgment of the collaboration expected with the front office.

But mostly, his mandate became clear. Despite World Series expectations, the Mets were 70-92 in Collins’ final season. A report by Newsday at year’s end revealed communication gaps between Collins, his front office and his players, many of whom had become disillusioned.

In Callaway, the Mets seemed to champion the opposite approach. Collins was criticized for not reaching out to all of his players, but Callaway devoted so much of his introduction to the importance of forging relationships that it seemed he had been hired to manage an orphanage.

“We’re going to care more about the players, more than anyone ever has before,” he said. ““We’re going to know that they’re human beings and individuals. And this is going to be a group that feels that every day that we come to the clubhouse, and that’s going to be our main concern. It’s to show them we know that this game is difficult and we care about you as a player, a human being, and about your personal life.”

It was clear that revamping a broken culture will be the focus. “I think rapport, empathy, all of those things that make a personal connection are what sustain a team over 162 games,” Alderson said. “It’s a long season.’’

Now the work begins. After praising New York and the Mets’ fan base, Callaway said he’s spoken to team captain David Wright and intends to continue calling other team members.

Then comes assembling a coaching staff, one that could be without a mainstay. Hitting coach Kevin Long has permission to speak with other clubs after he was passed over for the managerial job. A source confirmed that he is in the mix for the Nationals’ opening.

Once he completes what he called a “critical” offseason, Callaway said the real work will begin with players.

“We will also ask them to do more than anybody ever has before,” he said. “Our group is going to become a team because of our losses, our mistakes, the little rifts we have in the clubhouse. They’re going to know those things are OK as long as we’re trying to get better and learn from those things.”