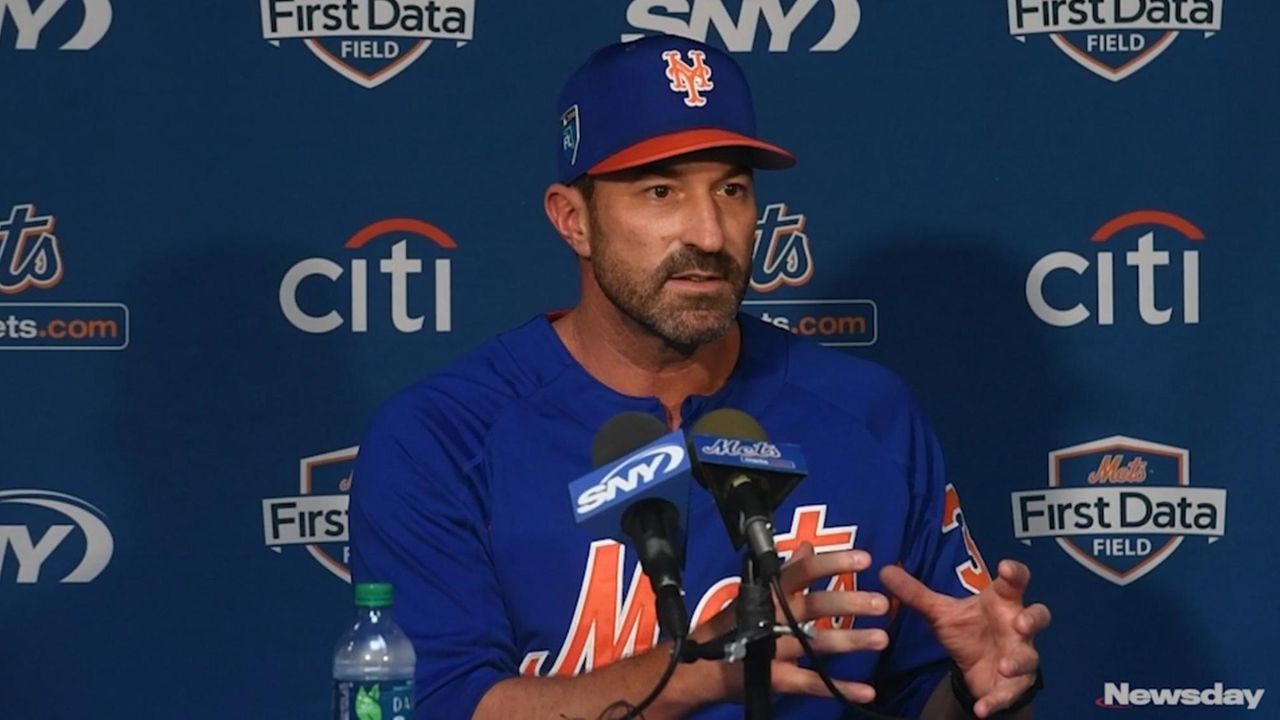 Mets manager Mickey Callway spoke during spring training on Tuesday, Feb. 13, 2018, about how he plans to keep an open line of communication for all of his players.  Credit: Newsday / Alejandra Villa

He planned to communicate his expectations to players, and communicate with his pitching coach. Communication, he said, was one of the things he was looking forward to the most as the Mets’ new manager. And he communicated all of that in the 34 minutes he spent answering questions on Tuesday.

Are you sensing a theme here?

Callaway, on the day after pitchers and catchers reported, painted a fairly clear picture of the manager he hopes to be. Players, he said, will know what to expect because he’ll go right out and tell them. Routine and structure will reign supreme (he used the word “routine” six times, for those keeping count). And if the Mets do all of that and still can’t jump that hurdle and truly compete for a spot in the postseason, then it’s all his fault.

“The front office has gotten us the players,” he said. “The coaching staff is the best coaching staff in the big leagues. You sit there and talk to these guys and they are going to hold guys accountable for what they do. We’re going to implement routine and structure.”

Whether people outside the organization believe this team can compete or not, one thing is certain — the Mets this year have a lot to prove after losing 92 games last season, and they sure do know it. But Callaway, who took over for Terry Collins, appears unafraid to change things up.

On Tuesday, he again confirmed that he would look to deploy a closer by committee — deciding who gets the final outs based on matchups — and would do the same when deciding which position players to play. He plans to keep a strict eye on that oh-so-fragile rotation, and insisted that, in the last few days he’s seen them, they’ve looked anything but weak.

There are also things he’s still not sure about.

Though it appeared Zack Wheeler would be the presumptive fifth starter, Callaway would not commit to the makeup of the rotation, saying it was too soon to tell. He doesn’t know who his leadoff hitter will be in the absence of Michael Conforto, and added that it could change day to day, depending on whether they had the pitcher batting eighth or ninth. Before spring training, it appeared Dominic Smith was destined to start his season in Triple A, but after seeing Smith — who looked svelte and “in great shape” — Callaway said it was possible the team could carry both Adrian Gonzalez and Smith as first basemen on their Opening Day roster.

“The key is just to communicate with guys every single day and have expectations they are aware of,” he said. “If we can do that and continue that communication and continue to express what those expectations are of each and every one of them on a daily basis, then we can implement anything we want.

“We are going to be prepared to have tough conversations with guys every day. We want to be challenged on what we are saying to them. If it makes sense and we’ve done our homework the right way, then guys are going to do what is expected of them.”

He plans to start right away, too. On Wednesday, he intends to have a meeting with pitchers in the weight room, “and I’m not sure that anybody’s had their first meeting with people in a weight room,” he said. The goal is to impress upon them the importance of routine in that area, and “what we expect them to do when they arrive at the ballpark. And that’s the first thing they’re gonna hear.”

A first-time manager and a seemingly natural pitching coach, Callaway did allow that there were some aspects of the game he’s had to pay less attention to over the years.

“I told Gary [DiSarcina, the bench coach] and Glenn [Sherlock, the third-base coach], I said you guys are gonna have to be on either side of me going, hey, dummy, it’s first and third, what play do you wanna put on, you know?” he said. “Because I’m gonna be looking at the game and going, oh, he just threw him a slider, he should probably throw a fastball up and in.”

And like any communicator worth his weight, Callaway said he intended to listen.

Barker: LI's Bird could be interesting option for Liberty as new coach
Georgiev solid in second straight start in place of hurt Shesterkin
Panarin shows he's got Chicago fire with big night in Rangers' win
Newly-benched Robinson helps propel Knicks past Spurs
Harden, Durant lead Nets on late comeback to beat Mavs
Gauthier not yet making most of his scoring chances
Didn’t find what you were looking for?