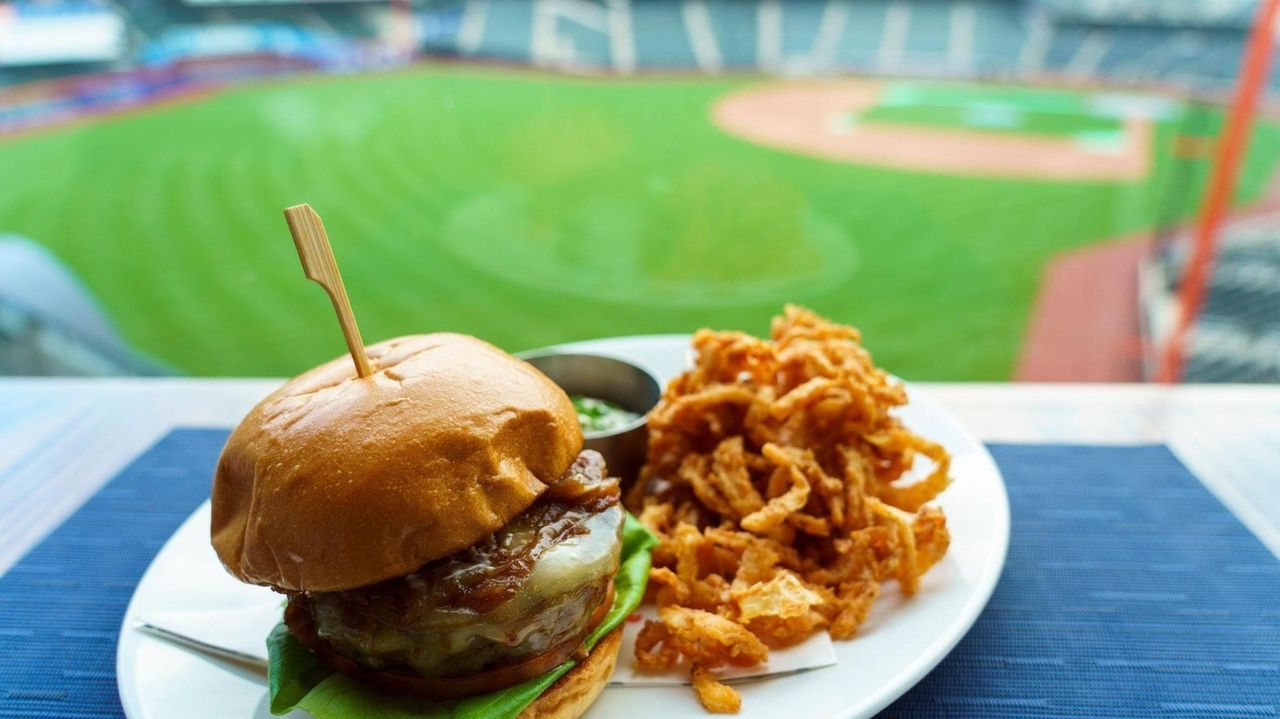 The Mets on Tuesday introduced the Polar Burger. Designed by and named after first baseman Pete Alonso, it will be available to fans this weekend at Citi Field. Credit: Corey Sipkin

Pete Alonso introduced his new "Polar Burger" to reporters on Tuesday, and it will be available to fans at Citi Field starting this weekend.

But what about his Mets teammates? Will they get a taste?

It remains to be seen whether that will fly given the finely tuned diets of modern professional athletes. But for $16.50, fans can judge his pet burger project for themselves.

There certainly is a lot going on with it, including a Pat LaFrieda’s black truffle blended burger patty, maple-spiced caramelized onions, smoked gouda cheese, lettuce, tomato, and claw sauce, all on a baked brioche bun.

Alonso said he was proud of the carefully planned ingredients, and the fact they are fresh and New York State-sourced.

"It’s definitely something coming back from COVID we can take a lot of pride in," Citi Field executive chef Jason Eksterowicz said, "kind of keeping our money within the state."

Alonso said he was aiming for a burger that is not overly heavy and can be enjoyed with a beer and a side such as the "Arctic Onions" served with the burger on Tuesday.

"You don’t want people feeling like they need to have a wheelbarrow to get them back on the train or back in their car to drive home because they’re too damn full," he said.

Alonso is 6-3, 245 pounds and 26 years old, so his definition of fullness might differ from those of many eaters. But most likely will find the concoction tasty — and messy.

It will be available near section 102, behind the rightfield foul pole.

"It’s a piece of me, and I really hope that anyone who enjoys this at the ballgame really, really enjoys this little meal or snack or what have you," he said.

Alonso began working with the food experts in February on his signature burger. "This whole ordeal, a lot went into this, a whole lot of brainstorming," he said.

He added, "It’s awesome not just to be able to put together a very tasty burger and enhance the fan experience by having something good to eat at a game, but it’s awesome we’re going to be able to incorporate local resources into this burger. It’s really awesome."

Alonso used the word "awesome" on numerous occasions in talking about his burger.

"I hope that fans really take to this and I really hope that these things sell out every single game," he said, "because, I mean, they’re damn good."

Logan: Harden might be linchpin of struggling Nets
Andujar called up from Triple-A, starts out of position at first
Mets unsure if Jacob deGrom will pitch on Sunday
Mets relievers have penned a turnaround to start season
Islanders' late slide is difficult to judge
Knicks burned by Bridges after they bypassed him in 2018 NBA Draft
Didn’t find what you were looking for?